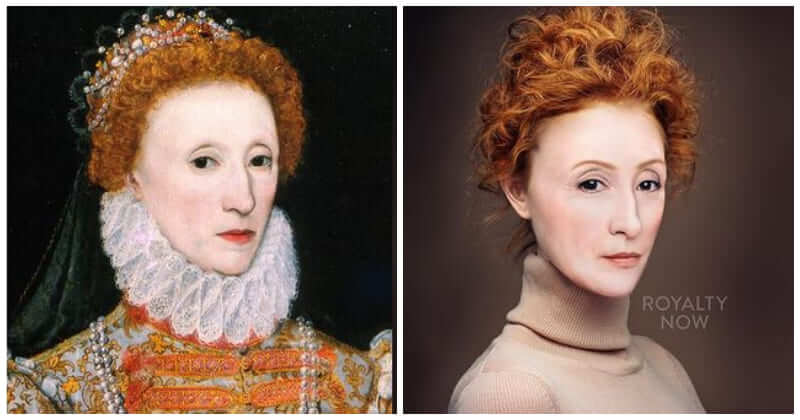 Recently, she has run her unique project called “Royalty Now” – an illustration series in which Becca depicts how the historical characters would look in modern life. The project has earned her more than 300K followers on Instagram, and today we’d like to show you some of her works of art.

According to Becca, she started drawing when she was small. Her parents tried their best to do her a favor in the field of art. By reading books with her, they sparked in Becca an interest in history as well. That was how the artist found the inspiration to reimagine historical figures as how they would look in modern life.

Are you excited to know the results? Scroll down to see how amazing they are! “She was the official chief mistress of Louis XV from 1745 to 1751, considered as a valuable aide and advisor at the time. She received a private education and was very quick-witted – learning all the skills she would one day need to thrive at Versailles. Pompadour was a major patroness of architecture and decorative arts, especially porcelain. She was a patroness of the philosophes of the Enlightenment, including Voltaire.” “Elizabeth I (1533 – 1603) was Queen of England and Ireland from 17 November 1558 until her death in 1603. Sometimes called the Virgin Queen, Gloriana or Good Queen Bess, Elizabeth was the last of the five monarchs of the House of Tudor.” (Wikipedia) Hürrem Sultan (1502-1558), was one of the most powerful and influential women in Ottoman history and a prominent and controversial figure during the era known as the Sultanate of Women. Hurrem is famous for not only being beautiful and the wife of the great Sultan, but also for being smart and active in the affairs and direction of the empire. She acted as Suleiman’s chief advisor and corresponded with politicians on matters of state both foreign and domestic. “Catherine (1519 – 1589) was Queen of France from 1547 until 1559, alongside King Henry II until he passed away. The problems facing the monarchy were complex and daunting, but Catherine was able to keep the monarchy and the state institutions functioning even at a minimum level. Intelligent but ruthless, she resorted to hard-line policies that included excessive persecutions and violence, leading the people of France to become extremely disillusioned with the monarchy.” “Victoria (Alexandrina Victoria;1819 – 1901) was Queen of the United Kingdom of Great Britain and Ireland from 20 June 1837. Known as the Victorian era, her reign of 63 years and seven months was longer than any previous British monarch. It was a period of industrial, political, scientific, and military change within the United Kingdom, and was marked by a great expansion of the British Empire. In 1876, the British Parliament voted to grant her the additional title of Empress of India.” “Alexander III became the King of the ancient Greek kingdom of Macedon at 20. He was ambitious. He spent most of his years as king conducting military campaigns and acquiring new territories to add to his empire. By the age of 30, he managed to conquer one-fourth of the Earth from Greece to northwestern India. Many historians consider him to be one of the most successful military commanders in history.” “Cleopatra VII Philopator (69 BC –30 BC) was Queen of the Ptolemaic Kingdom of Egypt, and its last active ruler.” “Charlotte Brontë (1816 – 1855) was an English novelist and poet, the eldest of the three Brontë sisters whose novels became classics of English literature. Her most famous literature was Jane Eyre. She was strong-minded, clever, shy (but ready to argue her beliefs), and apparently hated teaching young children.” “Pocahontas (c. 1596 – March 1617) was notable for her association with the colonial settlement at Jamestown, Virginia, and her travels to England.” “Hatshepsut came to the throne of Egypt in 1478 BC. She ruled longer than any other female pharaoh and is regarded as being one of the most successful pharaohs in Egyptian history. Egyptologist James Henry Breasted said she is “the first great woman in the history of whom we are informed.” She re-established trade networks and embarked on great building projects in Egypt.” “Genghis Khan was the founder of the Mongol Empire. He was also responsible for millions of deaths. As the documentary said,  he had red hair and green eyes, and his features were very similar to East Asian populations today.” “Idia was the mother of Esigie, who ruled as the Oba of Benin from 1504-1540 in what is now the modern-day Edo State in Nigeria. She was described as a great warrior who was integral in the rise and reign of her son who was the oba (king) of the Edo people.” “Bolívar was amazing. He was a Venezuelan leader who led what are currently the states of Venezuela, Bolivia, Colombia, Ecuador, Peru, and Panama to independence from the Spanish Empire in the early 1800s. He later became the president of Gran Colombia, a state which included present-day Venezuela, Colombia, Panama and Ecuador. During his campaigns, Bolivar rode over 123,000 kilometers on horseback, which is 10 times more than Hannibal, three times more than Napoleon, and twice as much as Alexander the Great.” “This portrait was painted when Mary was between 16 and 18 years old, painted around the time of her wedding to Francis, the Dauphin of France.” “Shaka kaSenzangakhona (1787-1828) was a powerful South African King, ruling over the Zulu Kingdom from 1816 – 1828. Also known as Zulu Shaka,  he preferred to apply diplomatic pressure over warfare. He was a master of social and propagandistic political methods, as well as a great warrior when he decided to engage. His reputation is a bit shaky, as scholars disagree on the extent to which he revolutionized warfare methods as he is credited.” “Richard III was the last Plantagenet monarch of England. Richard was known as a cruel cripple who probably killed the two children who were the greatest threat to his throne.” “Bull Bear was chief of the Oglala Sioux tribe. According to Karen McWhorter: In 1834, the Oglala Sioux began to move southward from their traditional home on the Missouri River into the Laramie Plain, historically a shared hunting ground for many tribes. The Sioux’s migration caused tumult among the many Indian cultures who communally used the area, many of whom were longstanding enemies.” “Qin Shi Huang (around 210 BCE)the founder of the Qin dynasty, and first emperor of a unified China. He became China’s first emperor when he was 38 after the Qin had conquered all of the other Warring States and unified all of China in 221 BC. He ruled as the First Emperor of the Qin dynasty from 221 BC to 210 BC. His self-invented title “emperor” would continue to be borne by Chinese rulers for the next two millennia.” (Wikimedia) “Augustus, born Gaius Octavius, was the great-nephew of Julius Caesar and his heir after Julius Caesar was assassinated. Augustus was incredibly intelligent and skilled at diplomacy, and became the first emperor of the Roman Empire, reigning for 40 years. Augustus turned out to be a master at civil politics, and throughout his reign he reformed the taxation system, the transportation system, the Roman police and fire services, and the city’s architecture. He also greatly expanded the empire.” “Al-Nasir Salah al-Din Yusuf ibn Ayyub, known as Salah ad-Din or Saladin (1137-93) was a 12th century Kurdish Sultan and crusader. He is mainly known for defeating an army of Christian Crusaders at the Battle of Hattin and capturing Jerusalem in 1187. He was uniquely famous during this time period, both in his own lands and in the Western world.”

The Art Of Origami: How Romanian Artist Folds The Paper Into “Talking” Cranes

Lovely Moments Of Squirrel Enjoying The Sweetness Of Flowers Captured

These 30 Colorful, Adorable Illustrations Can Take You Back To Your Wonderful Childhood

25 Cute, Simple Illustrations For Those Who Seek Positive Vibes For Their Dull Day

25 English Idioms Are Depicted Literally Through Brilliant And Hilarious Illustrations