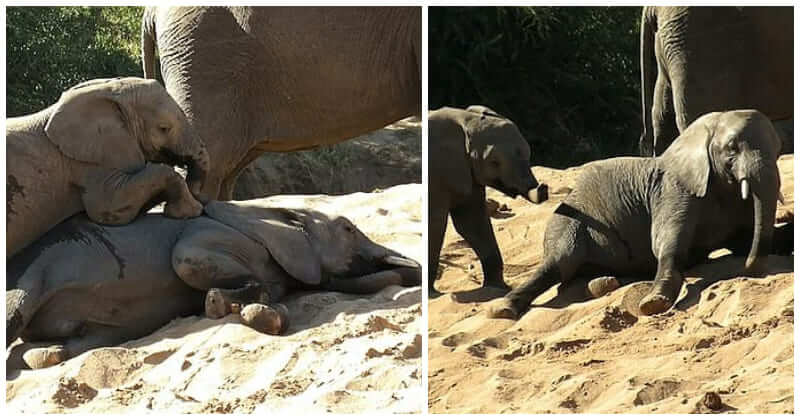 Elephants are always loved for their being intelligent, playful, and adorable. But if there is anything more adorable than the elephant, it’s the baby elephant. The moment when this naughty baby elephant tries to wake up his brother will show you why. The scene was shot by a tourist when he was visiting Kruger National Park (South Africa), and it might be the cutest thing you see today. Watch it now:

Children often have so much energy that they love to play and enjoy things all day long. The elephant in the video is the same. He looked so excited under the sun while his older brother was enjoying his sleep in the early morning. Of course, who wanted to play alone on a nice day? What happened next, as you might expect, was such a hilarious sight to see.

The little naughty baby jumped on top of his brother, hoping to wake him up with his weight. The sleepy brother, however, refused to get up and continued to sleep.

Trying for the second time, the little elephant started pushing and shoving his brother more intensely. It seemed like he was not going to give up until the brother agreed to play with him. All of a sudden, the bigger elephant opened his eyes and quickly jumped up as if he was trying to say: “That’s enough! Alright, I will play with you baby!” The video was only forty seconds but we think it already crack you up with the adorable behaviors of the elephants. Share this interesting video with your family and friends!

The Life Of A Proud Cat Owner: Expectations vs. Reality

Woman Asks If She’s Wrong Not To Buy An ESA For Daughter, And Redditors Are Dividing Themselves To Reply