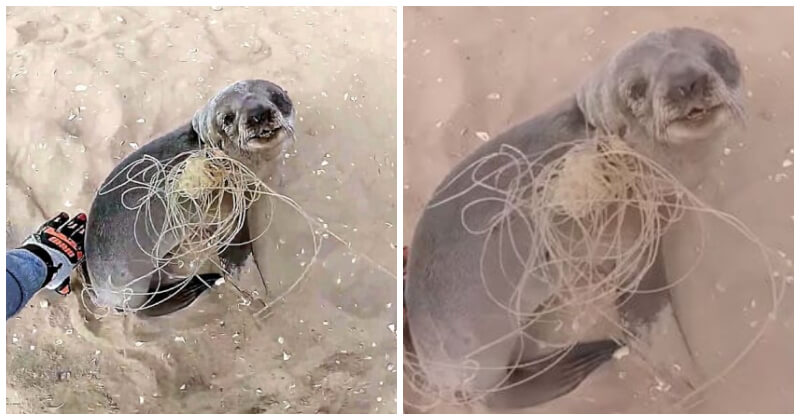 Not only territory wildlife, but marine life also suffers heavily from the expansion of human activities. Overfishing, oil spills, discarded nets, and trash are some main reasons causing the disappearance of aquatic species.

Many conservation organizations have been established to save animals’ lives and raise public awareness about this alarming issue. One of them is Ocean Conservation Namibia (OCN), a non-profit organization working for the welfare of marine species. Recently, OCN shared a video about the rescue at Walvis Bay. Rescuers Antoine and Naide visited this region to help seals trapped in fishing nets. Commercial fishing operations are prevalent in this area, so many seals got entangled in the wires on the beach.

Seals often panic after realizing their body were covered by a fishing net. As a result, they run around desperately, making the net tighten around their body and hurt them. If these poor animals are not rescued by people, they would likely end up starving or suffocating to death.

Generally, entangled seals often bite their savior and escape as quickly as possible because they think they are threatened. That’s why Antoine and Naude were amazed by the sweet response of a baby seal after they freed him. The seal cub was struggling with a net while the rescuers approached him. A sharp fishing line was around his neck, so a rescuer had to grab the baby’s neck to get rid of the wire. During the process, the seal surprisingly stayed calm and looked at the guys with his big eyes. When the cub was freed from the deadly net, he lingered on the sand instead of heading full speed to join his herd. He turned his head to the rescuers multiple times with a sweet expression to show his gratitude. It must melt the rescuers’ hearts and all people reading this moving story. It’s terrible when these adorable creatures are suffering due to human negligence. Please share this story with your friends and family to show them the beauty of other species!

People Are Posting The Funniest Photobomb Their Pets Have Caused, And They Are Hilarious!

15 Dogs Who Wake Their Owners Up With Hilarious Faces

Treat Your Pets Like Royalty With Renaissance Masterpieces And Royal Portraits