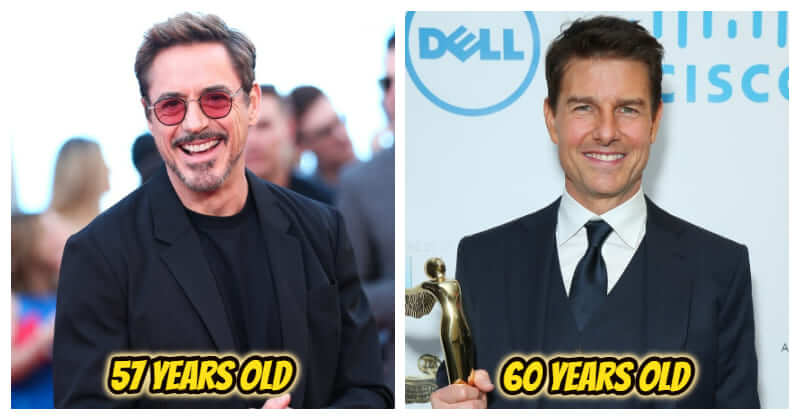 Aging can be a time of great growth and opportunity if you are blessed with good genes.

For the majority of the world, however, older men have a tendency to lose their hair, have more wrinkles, and have less muscle mass. Which effectively makes them a lot less attractive than those in their prime.

However, the same cannot be said for Hollywood men over 50, who remain super attractive even in their older years. Maybe they use makeup and take better care of their skin? Maybe plastic surgery. Or maybe it’s simply good genes that keep them aging like fine wine. Not to mention the wealth of experience and knowledge to share. Oh, and actual wealth, of course!

In fact, we invented the term “silver foxes” to describe Hollywood men over 50 who are attractive, successful, and rich, with beautifully greying hair. They have it all, and they’ve had time to perfect their craft. They’re confident, they’re sophisticated, and they’re just plain hot!

George Clooney, Brad Pitt, and Tom Cruise are just a few of the most beautiful silver foxes in Hollywood. But we all know that. Let’s see who else can be considered the top men over 50s of Tinseltown. Denzel Washington, who was born in 1954, never seems to age… ever! He looks just as he did when he first arrived in Hollywood decades ago. We find it hard to believe Brad Pitt is just a few years short of 60 years old. The gorgeous actor who won an Oscar for his performance was born in 1963. Jon Bon Jovi looks great whether he’s dressed up in a business suit or rocking out on stage! He doesn’t need to be “Livin’ on a Prayer” in order to preserve his beautiful looks. Can you believe the rocker, who was born in 1962, will be 60 years old in 2022? Colin Firth looks fantastic! The British actor, who was born in 1960 and turned 60 in 2020, just has a classic style that we find really appealing. Hugh Jackman is the man for you if you enjoy men who can pull off a well-choreographed musical act or X-men! He has been taken by his wife Deborra-lee Furness since 1996, which is unfortunate for the rest of us. The handsome Australian actor turns 50 in 2018 and was born in 1968. Tom Cruise isn’t slowing down, either professionally or physically! The celebrity, who was born in 1962 and will turn 60 in 2022, can still do just as many adrenaline stunts while making us swoon. Sean Penn is in his 60s, yet he demonstrates that age is just a number. The star’s ruggedly gorgeous looks make us forget what decade he’s promoting. Sean, by the way, was born in 1960 and turned 60 years old in 2020. His wife, Leila George, is over three decades his junior. Steve Carell has obviously improved with age! Though we may not have realized it when watching him as Michael Scott in “The Office,” the adored actor, who was born in 1962, is now a genuine movie star… and a silver fox! Rob Lowe has undoubtedly discovered the elixir of youth. The former teen star, who was born in 1964, seemed to have aged just a few years! Pierce Brosnan just appears to carry himself with that James Bond swagger all the time. The Irish actor was born in 1953 and will be 70 years old in a few years! Perhaps “The Matrix” gave Keanu Reeves a special anti-aging serum. He looks just as hot now as he did in 1991. Keanu was born in 1964, by the way. Since John Travolta wooed us in a white suit in the 1977 film “Saturday Night Fever,” a lot has changed. But the two-time Oscar nominee, who was born in 1954, is now a different sort of gorgeous – older, wiser, and just as hot, with a whole new bald ‘do. Alec Baldwin’s six children under the age of ten must keep him in shape! The father of seven, who was born in 1958 and turned 60 in 2018, looks great. Or perhaps it’s his wife Hilaria Baldwin, who is 26 years his junior! Antonio Banderas continues to make our hearts race. Not unexpectedly, the super-sexy Spanish celebrity, who was born in 1960 and will turn 60 in 2020, is presently seeing a woman 20 years his junior. Maybe Tom Hanks didn’t look so great back in 2000 when he played a guy abandoned on a desert island in “Cast Away.” But in real life, he has a really attractive appearance! The two-time Academy Award winner was born in 1956. Is it possible that Robert Downey Jr. is in his late 50s? The quirky, beautiful celebrity, who was born in 1965, seemed to be becoming more attractive by the year. There’s definitely something broodingly seductive about Liam Neeson – and those baby blues don’t hurt! The Irish actor was born in 1952 and will be 70 years old in 2022! Samuel L. Jackson, who turned 70 in 2018, still has flair, swagger, and some pretty decent genes. LaTanya Richardson, the Marvel franchise star’s wife, has kept him near since 1980! In the 1999 romantic comedy “Notting Hill,” Hugh Grant spoke the famous phrase, “I’m just a boy, standing in front of a girl, begging her to love him.” The English actor, who was born in 1960 and will celebrate his 60th birthday in 2020, may no longer be a lad, but we still like him. Isn’t Richard Gere the epitome of a silver fox? We certainly think the “Pretty Woman” actor, who was born in 1949 and celebrated his 70th birthday in 2019, is hot. Kevin Bacon danced away our hearts in the 1988 film “Footloose,” and his sculpted jawline still makes us dizzy. The former teen star was born in 1958 and celebrated her 60th birthday in 2018. Michael Keaton is already extremely attractive, but those spectacles really provide that additional oomph we’re looking for! The Oscar winner, who was born in 1951 and will be 70 in 2021, should wear them more regularly. 15 Odd Things Celebrities Did At Their Parties