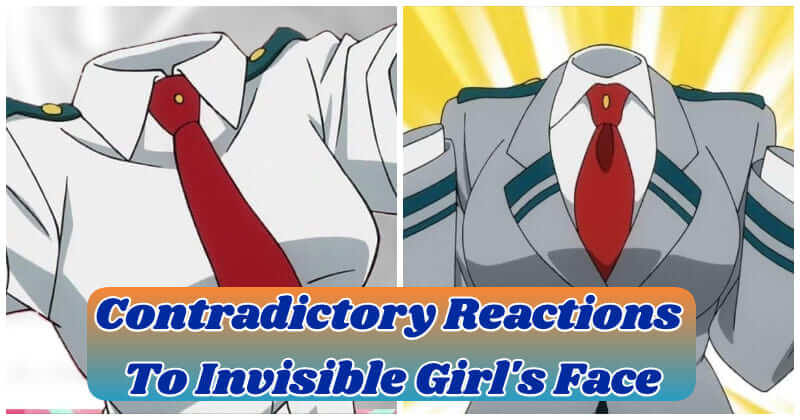 Fans of My Hero Academia were surprised not just by the disclosure of Toru Hagakure face, but also by the revelation that Yuga Aoyama was the traitor. Invisible Girl, aka Toru Hagakure, has emerged as a central figure in the final few issues of the My Hero Academia manga after having played a supporting role for most of the book.

Much of it at first centered on whether or not she was the long-supposed U.A. Indicted for high school betrayal. The manga gave readers every reason to believe that Toru was the traitor but then pulled a classic “bait and switch” by revealing that Yuga Aoyama was, in fact, the real traitor.

#1. How Did Invisible Girl Reveal Her Face?

By that time, Toru’s moment of glory appeared to end, and she was resigning herself to life as a background player again. What followed, however, catapulted her back to the forefront of the My Hero Academia debate. Aoyama lashes out at Deku with a laser blast to the belly button after being confronted about his double life. The light refraction skills of Toru, standing next to Deku, allow her to deflect the explosion away. Her defensive move is typical for Class 1A, but the crowd didn’t expect how the light bent as she turned away from the blast, showing part of Toru’s face. If you are interested in Aizawa, check out her top 5 fascinating facts. Toru’s appearance has been shrouded in mystery since Invisible Girl was introduced 330 chapters earlier in the manga. The supporters’ reactions to the reveal were undoubtedly open and honest. Many fans started speculating on what a fuller unveiling of the face would look like after seeing the partial reveal. Other fans have taken advantage of the partial facial reveal to create their depictions of what a fully visible Toru would look like. Many viewers felt disappointed that Aoyama was the traitor soon after the announcement. In other words, it is possible to dilute the effect of two major reveals by making them simultaneously.

One reader felt the reveal lacked excitement and was just another attempt by mangaka Kohei Horikoshi to silence those who thought Toru wasn’t the traitor despite the overwhelming evidence to the contrary. True, people thought Toru would be the traitor for a long time during the manga’s run. People thought she would make a great minion for All for One because she was invisible and trained to make the most of it. Who knows where she is at all times? Moreover, you may be interested in these strongest MHA characters. The disclosure of Hagakure’s face isn’t as satisfying as some might have imagined. Her face shows obvious agony because of the gravity of the situation. Her eyes well with tears as she struggles to make sense of Aoyama’s betrayal. Because Hagakure is typically such a happy-faced young lady, witnessing her face distort in pain for the first time is excruciatingly painful. With everything else going on in Chapter 337, it’s easy to lose track of this major plot point. This chapter focuses squarely on Aoyama by exploring his students’ responses to his betrayal, including Hagakure’s.

However, this peeks at Hagakure’s face should not be discounted because the UA traitor subplot will be crucial to the overall drama. The mystery surrounding Hagakure’s actual appearance predates even the search for the traitor. Although the lighting isn’t great, this doesn’t have to be the last time you see their face. This casual revelation may set the stage for a deeper dive into Hagakure in a future episode of My Hero Academia. Also, don’t hesitate to have comprehensive vision about Midnight’s death.