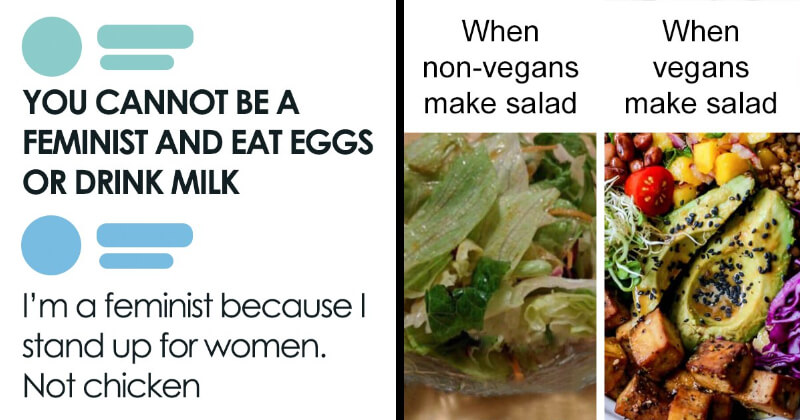 Veganism is a healthy lifestyle that indeed should be adopted by more people. Usually, people who follow the diet or philosophy exclude animal products from their diet and also their daily life. According to some research, a vegan diet has positive health effects. It lowers the risks of heart disease, diabetes, and diverticular disease.

On a larger scale, being vegan helps slow down global warming. Maybe you don’t know that methane gas in the atmosphere is mainly from cattle feces. As humans consume more meat, the herd will grow bigger. More cattle, more feces, so more methane. By completely cutting off animal products from different aspects of life, veganism is a hope to reduce human impact on this world’s environment.

Even though the philosophy of veganism is good, people who follow it are not necessarily the same. Not all, but many of those vegans think that they are better than other people. And other people here are those who are non-vegan. Some vegans excel at gatekeeping others. So good that they even bring non-relevant matters into a conversation just to prove that they’re in a higher position. Have you ever thought about the relationship between supporting feminism and eating eggs? Like, do they have anything to deal with each other at all? Yet, some vegans use this as an argument to deny the opinions of others on the matter. Where’s the logic? Well, there’s nothing logical or reasonable when talking to such vegans. And here, the list we have made below contains pictures that captured the moments when vegans tried their best to gatekeep.

Not gonna lie, some vegans are so good at demeaning others that we doubt it’s a side effect of becoming vegan. Anyway, their gatekeepers are just ridiculously funny. And we believe that they’ll bring you a good dose of laughter for the day. Keep scrolling down and be sure to reach the end of this post!

#2 Apparently I’m not a vegan, even though I don’t buy animal products. There are toxic people in every community 🙁 Like, watching Bob’s Burger make you a fake vegan? What’s that? Watching a program can turn your broccoli into meat or something? Ignorance is bliss, people say. But in this case, ignorance is for nothing but making you look like an idiot, indeed. What’s that standing up for all women makes you a feminist? Now that hens can cast votes or something?

#5 The Orator of all Vegetarians So vegetarians now also need to be animal advocates to legitimate themselves as vegetarians? Wow, never thought that becoming a vegetarian can be this hard! #10 Faker than the fake tofu meat they make Let’s make this clear. Those vegans think that non-vegans can’t make salads that look appetizing. How bold is too bold? Yeah, I’ll tell you that if you’re bold like this vegan, it’s not just bold you are, you’re delusional.

#12 Only vegans are allowed to care about the environment #13 My sister is eating my vegan ice cream… But she’s NOT VEGAN? #15 These people give vegans a bad rep #16 I guess being a true vegan requires an iron deficiency #18 You can’t care unless you are vegan #20 Found this on r/vegan. If you’re vegan for reasons other than the animals I have news for you… you’re not vegan sorry bud #21 Only vegans know the secret uses of ripe bananas 20 Parenting Tweets That Hilariously Describe What Parenthood Is Like