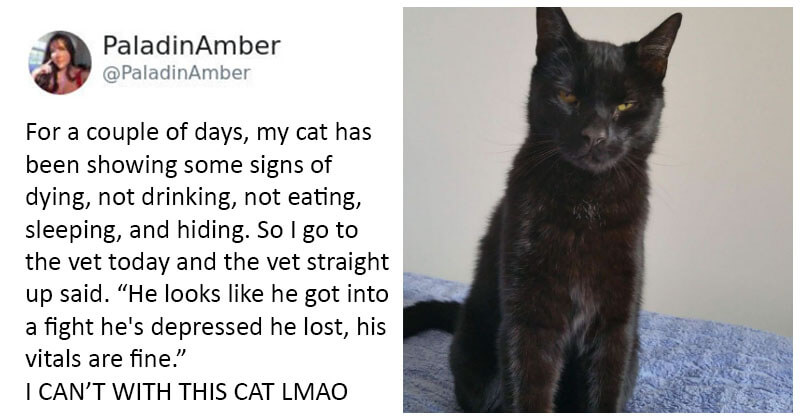 If you think cats don’t often care about their humans, perhaps you are wrong. Some people pretend to be cool on the outside but are actually warm and affectionate on the inside. Cats are the same. They might act independently, but they do feel all sorts of emotions such as happiness, anger, sadness, or disappointment. If their owners don’t provide them with enough love and care, they’ll be sad, just like other animals.

A cat has recently pretended to be sick as it wanted more love, care, and comfort from its human. Twitter user @PaladinAmber has shared the story of her cat, Louis, who refused to eat and drink for three days. She thought he was ill, but when she took him to the vet, the reason turned out clearly that the cat did that intentionally. Actually, Louis wasn’t sick at all. He was just sad about the fight he lost with the neighbor cat. Therefore, the vet reassured @PaladinAmber that her feline was completely fine and that there was no need to worry about Louis. Everyone, meet our boy, Louis. Well, we do feel embarrassed sometimes, but we have to learn to overcome it. Anyway, it’s good to hear that Louis finally agreed to return to his usual diet. Poor boy! PaladinAmber’s post attracted more than 823K likes and thousands of comments. A lot of people were excited about Louis’ cuteness, but some people shared stories of their own pets pretending to be sick to get attention from their owners. 20 Exotic Birds That Are Simply Too Beautiful To Be Real