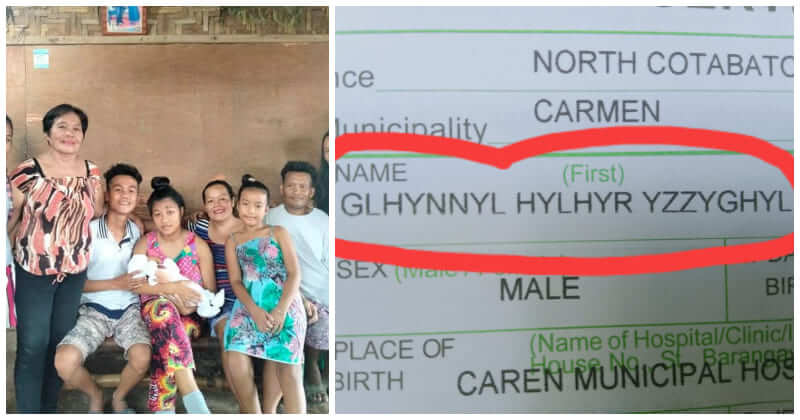 Giving a baby a name is something most families would love to discuss. Some families choose pretty names, some choose really weird ones, but they all wish the best for the kid. Some parents want their babies to become unique, so they come up with the most unique names ever, while others name their children based on their family’s cultural traditions. It means that when a baby comes into the world, the family has to decide on who it should be named after and what its name symbolizes.

Recently, a family from Cotabato province, Philippines, has made the headlines for celebrating their new baby’s arrival with a name that has zero vowels: Glhynnyl Hylhyr Yzzyghyl. You think that X Æ A-12, Elon Musk’s baby, has the most unique name you’ve ever known? No, this baby boy’s name is much more special. It is not only confusing in terms of pronunciation and spelling, but it is also the most unique, beautiful, and meaningful name I’ve seen.

On April 27, the baby was introduced to people on Facebook after a family friend, Yuleses Romneck Cequiña Referent, posted a picture of the newborn’s birth certificate with the caption: “Welcome to the amazing world, Glhynnyl Hylhyr Yzzyghyl M. Buscato.” The post shortly went viral with 30K reactions and 51K shares. I believed that you are having the same feeling as many other people on Facebook, who were impressed by the baby’s name and decided to give it a share. In response to people’s massive attention, the baby’s parents decided to explain the reason why they chose the name.

The baby’s last name was given by its granduncle, 25-year-old college student Raugyl Ferolin Estrera, while the special first name “Glhynnyl Hylhyr Yzzyghyl” was decided by its parents who thought it was “bizarre” but “beautiful.” As explained by Estrera, the amazing name was formed after a process of mixing letters from different family members’ names. Letters G and N in “Glhynnyl,” for instance, came from Estrera’s mother name Geraldine, and letters N, Y, and L were chosen from the baby’s grandmother Joralyn.

As you might realize, there were many Y but no vowels in the name. Estrera said that the vowels were all replaced by the letter Y in order to tribute to a family naming pattern, because Estrera’s siblings’ names all had the letters Y and L, some of them were “Joralyn”, “Jeoradyl”, and “Jerrylyl.”

I agree that this is a beautiful name. what about you? Share with us your feelings in the comment below.

23 Insanely Accurate Tweets That Make You Go “That’s Me”

19 Photos That Need A Super Brain to Decipher

20 Extraordinary Photos To Show The Imagination Of Nature

People Are Sharing The Worst Things Happened To Them This Week

20 Weird Photos That Are Literally Hard To Explain, As Shared On The “Meta Visions” Instagram (New Pics)

23 People Who Were Way Too Smug About Their Wrong Answers

Because Of Being Jealous With His Girlfriend’s Horse, Controlling Boyfriend Demands That She Sell Her Horse

Get Your Funny Bone Ready For These Epic Parenting Fails