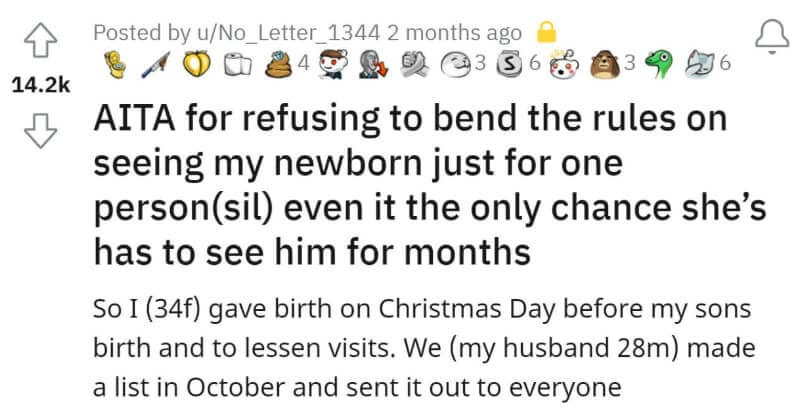 Parents are often protective of their newborn babies, but it’s not hard to see why. Babies need a lot of care and protection in at least the first two years of their life. However, more and more parents are becoming over-protective toward their children, especially in the pandemic.

A new mom who gave birth last Christmas has shared with Redditors an outrageous list of rules she demanded visitors to follow if they wanted to see her baby. Some of the rules that should be mentioned are staying for only an hour without picking up the baby, buying a gift for the baby and the mom from the approved list, informing them a week in advance so they can arrange a time. Also, the new mom was too strict with these rules and refused to ease them in any case.

This led to a big problem as her sister-in-law really wanted to visit her baby but she was unable to take in a number of rules. Meanwhile, OP still didn’t change her mind and only allowed the person who could follow all of the rules. Can you imagine how ridiculous it could be that the sister-in-law was broke and cried out?

The story posted on r/AITA quickly became the center of the Internet with 14.2K upvotes and 6.2K comments. Read the full post here.

We agree that boundaries are important when it comes to a new baby, but some rules can certainly be bent if they don’t put the baby’s health and safety at risk. In the story, OP’s list included some rules that were unnecessary, unreasonable, and should have been deleted. Netizen had an instant response to OP’s behaviors. Let’s see their reactions here.

Some Of The Most Fascinating “Unknown Facts Daily”, As Shared On ‘Facts Encyclopedia’ Instagram

20 Designs That Are Both Creative And Amusing

If You Think You’re Having A Bad Day, Take A Look At These 21 People

19 Examples Of Cringy Text Messages That Truly Hurt To Read