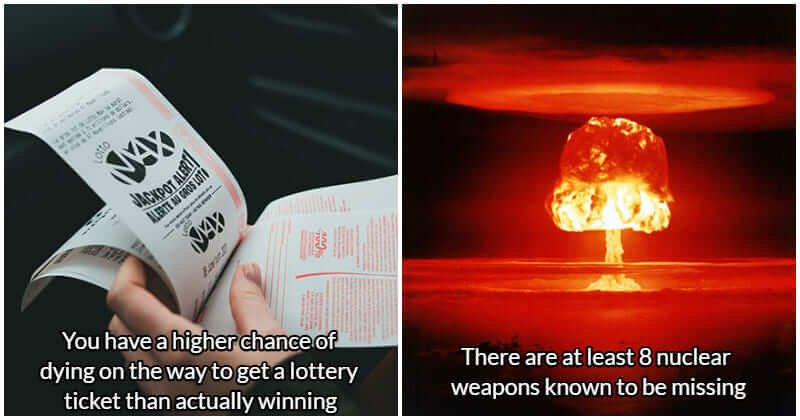 Yes, the world is so vast, and there are so many things out there for us to learn. We know that you all love to learn one or two little fun facts every day. Well, even though we call it “fun fact,” it’s sometimes actually not that fun, not at all. Like two sides of the same coin, this world can be beautiful and bright but can also be dark and terrifying. Right, some of those “facts to ruin your day” are more distressing than fun to know. But, poor souls, people only wish they could unlearn them.

What are some not-really-fun facts you might not have known? The list below is full of facts to ruin your day that can possibly bewilder every single one of you. Do you know that whales do not die off age but just get drowned as they become too weak one day? That’s plain sad. And the list below is full of facts like this. So, you may consider turning back now. But if you still want to know, then keep scrolling down and check them out. #2 There are only 2 states in the US that have outlawed child marriage. One of them only just put it into law a few weeks ago. 23 states don’t even have an age limit on marriage #5 After experiencing the symptoms of Rabies there is no going back, you are dying 100% #6 Only one in every 1,000 sea turtles born ever make it to adulthood #7 Anyone can have a brain aneurysm at any age. No matter your health situation #10 When your skin becomes red from spending too much time under the sunlight, it’s basically because your skin cells are committing suicide to avoid becoming cancerous #11 That brain-eating amoebas exist at all and is also pretty commonly found in freshwater ponds and lakes. Apparently, only 4 people have survived getting it in the last 50 years #12 There is a whale called 52 Blue that only sings at that frequency meaning it can’t communicate with other whales. It is nicknamed the loneliest whale on the planet #13 Your voice on recordings is actually how your voice really sounds. Your voice in your head is a bit muffled and deeper because the sound travels through your head instead of the air. That’s why it feels weird to hear your own voice recorded #14 Most animals will kill you before eating you, bears just start eating you #15 One day the last person who knows your name will die and you will be forgotten. You could still be alive when this happens #16 From 1948 – the end of the Cold War, there were approximately 5,000 close case scenarios in which Nuclear weapons were launched or detonated. The fact that we are alive is a statistical miracle #17 When Hitler was four years old he fell into a pond next to a church and nearly drowned. However, the priest jumped in and saved his life. To think that WWII and the holocaust, as well as modern history as a whole, could have been prevented if not for that man is mind-blowing #19 Dead people can get goosebumps #22 Your lips are made of the same skin as your anus. Do you have lips on your a**, or an anus for a mouth? #24 Whales don’t die of old age. Eventually, they just don’t have the strength to resurface and slowly drown 20 Horrendous Haircuts That Will Make You Laugh

Hilarious Yard Signs You Wish Your Neighbors Had

23 Cake Disasters That Kill Your Imagination And Traumatize Your Children