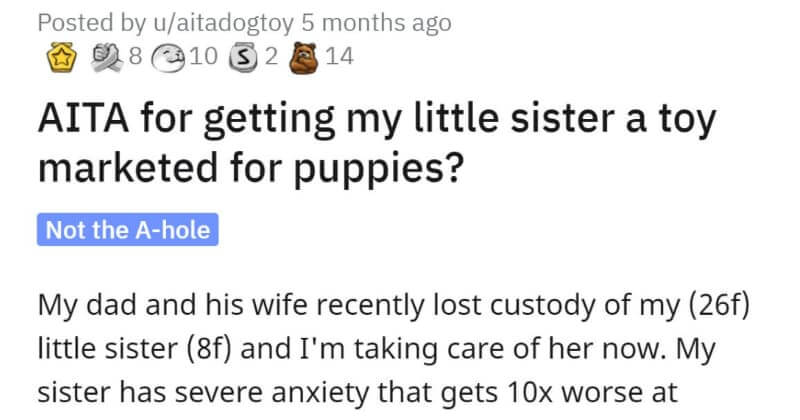 Looking after a kid is not easy, especially when you are not really for it. A twenty-six-year-old woman has recently shared on Reddit how she dealt with an eight-year-old sister whom she was asked to take care of after her dad’s breakup with his wife. Unfortunately, her method wasn’t approved of by her close friend.

OP (original poster) told that her sister had anxiety issues that made it very difficult for her to fall asleep during bedtime. To train the little sister to sleep on her own,  OP purchased a stuffed animal with heartbeat so her sister could feel comfort and safety. It worked, actually.

However, when OP talked to her friend about that, she clearly showed her disagreement. The friend believed that marketed stuffed animals were aimed at dogs, and OP shouldn’t have given her little sister something meant for puppies. Her story has gained 6.3K upvotes, and nearly a thousand Redditors have come to prove that OP is not an a**hole.

While a product is often targeted at a (or some) certain group(s) of people, it doesn’t mean that untargeted customers can’t buy the product, as long as they have a demand for it.

If it is safe for dogs, it is safe for kids. And, OP said that it worked with her little sister. So, was there any reason not to buy it? She was a good sister.

The friend seemed to be judgy this time.

See how the netizens reacted to the story here. If you have any opinions, please join the discussion by leaving us a comment! These Baby White Lions Step Outside For The First Time, And Their Reactions Are Priceless

Reddit Defends Man Who Takes Everything From His Ex, Even Her Cat After Breaking Up