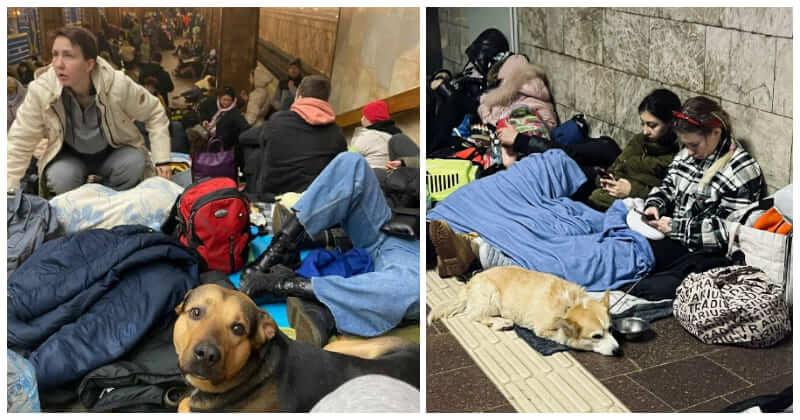 As a current Russia – Ukraine tension attracts the world’s attention, citizens of both nations are fighting their ways against this evil, life-taking conflict. However, those who suffer the most in this war are Ukrainians, who suddenly become homeless and unwantedly flee their home country to safety.

Along with Ukrainian’s journey to migrate, there is a popular thread on social media during these very anxious and heartbreaking days – Ukrainian folks are seen escaping the war with their beloved pets. Subway stations are turned into shelters where many folks are hiding with their pets making their uneasy way to cross borders. Those who are left behind due to complicated procedures and vaccination restrictions are choosing to stay together with their pets. Fortunately, many EU countries such as Poland, Romania, and Slovakia have eased entry requirements and allowed Ukrainian refugees to come to safety without having to give up on their pets. This, in fact, is supported by not only Ukrainians but also people around the world because it avoids animals being left to survive alone in danger. Many people consider their pets their family members and treat them just like any ordinary parent would, so actually, raising an animal is like taking responsibility for a baby.

This is a difficult decade for us, humans, as we’ve spent two years dealing with a terrible pandemic that has taken the lives of many people. Now, during the conflict that potentially leads to World War III, everything seems to be turning to a scarier chapter. No one knows exactly when and where this crisis is going to end, but one thing we can be sure is that if we don’t take any action to stop it, a tragic scenario is going to happen. We believe that there are many ways that we can come to an agreement without using violence or putting people’s lives at risk. Instead of forcing people to end their peaceful lives, ending children’s dreams, and killing many innocent souls, let’s make the world a better place to live. At least, in such a terrible war, we are able to witness the beautiful love of owners who didn’t decide to leave their furry companions no matter what. Kitten Pooping Trying To Learn How To Use Litter Box, But Then… He Does The Funniest Thing Ever, OMG

15 Dogs Who Wake Their Owners Up With Hilarious Faces

Fat Rat Stuck In Sewer Grate And Waited For Help In Vain, He Didn’t Think Anyone Would Stop To Save Him

10+ Cats With The Most Incredible Eyes In The World