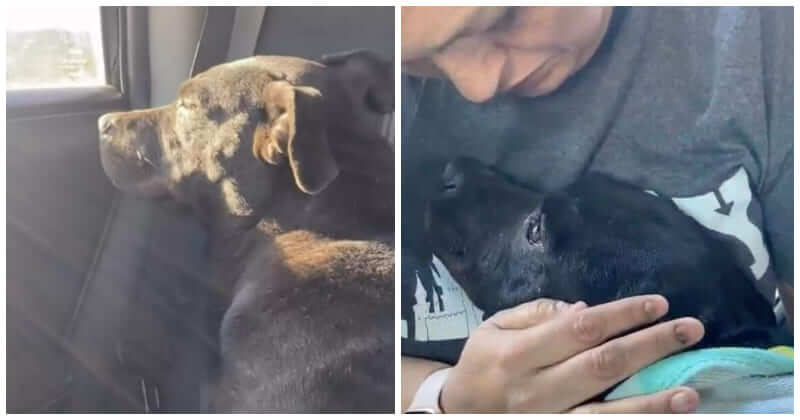 We’ve always admired those people who work to help animals in need. And when we hear the story of Jacks Anderson and her wife rescuing a pregnant street dog, we can say nothing but hundred thanks to them.

Poppy the pittie was found by Jacks and her wife in November 2021 when they were having lunch at a fried chicken stand. Poppy was laying on the sidewalk under the barstools at the counter watching them eat. She didn’t take her eyes off them but didn’t come to beg for food either.

It was not long before the owner of the stand appeared and shooed her down the street. To Anderson’s surprise, she was scared and ran away.

They came across the dog, once again, when they were walking to the parking lot after lunch. This time, the couple was able to see her large, pregnant belly, and they knew they couldn’t leave the dog and her babies to survive alone in such a dangerous environment. It was not the first time they approached and tried to earn the trust of animals, so they knew exactly how to comfort Poppy and convince her. “My wife took the leftovers, and I walked toward her to put them down for her,” Anderson told The Dodo. “She was very skittish, but we could see some of the scars that she has, so I understood why she didn’t want to risk it.”

The moment the dog was put in their car and realized she was already rescued to safety, Poppy couldn’t be more grateful.

“We just kind of paused at that moment to allow Poppy to calm a bit, but honestly, she was far more calm than I anticipated,” Anderson said. “I started to record the video of my wife comforting her, and I realized that Poppy had tears coming from her eyes. I don’t think I’ve ever seen that in a dog, and it definitely made an impact.” The good news was that Poppy was relatively healthy, she just needed to be treated for fleas and worms. Once she finished the treatment, she was released into Anderson’s care.

“Poppy spent her first couple of days with us just one on one,” Anderson added. “She slept nearly all the time and acclimated to the couch pretty quickly. In the last day or two, she’s become far more active, showing interest in the other dogs and following me around instead of sleeping.”

Turns out, Poppy was a sweet dog that loved being cuddled and petted and soaking up every piece of love she got from her humans.

When the mom dog was about to give birth, Anderson and her wife decided to take her home to care for her. When the couple first met Poppy, they thought they would only foster her. But after she set foot in their house, they knew that they wanted to take care of her family, too.

“Poppy will stay with us. We’re learning more about her all the time and building trust with her,” Anderson said. “I don’t want to send her to someone else to make her go through that again. She’s earned an easier go of things.”

Now, Poppy and her pups are living happily with Anderson’s family. They will take care of the dogs until they are old enough to find their own loving homes. And, Poppy won’t have to worry about going back to the street again.

Best wishes to this beautiful doggie family! If you want to watch more videos about Poppy and her pups, please follow Anderson on Tiktok.

Dogs At The Malls Considered Attention-Seeking Attempts, Redditors Debate Whether Pets Should Be Allowed In Public Places

Expectation Vs Reality Of Giving Pets A Gift, And They Are Incredibly Hilarious (20 pics)