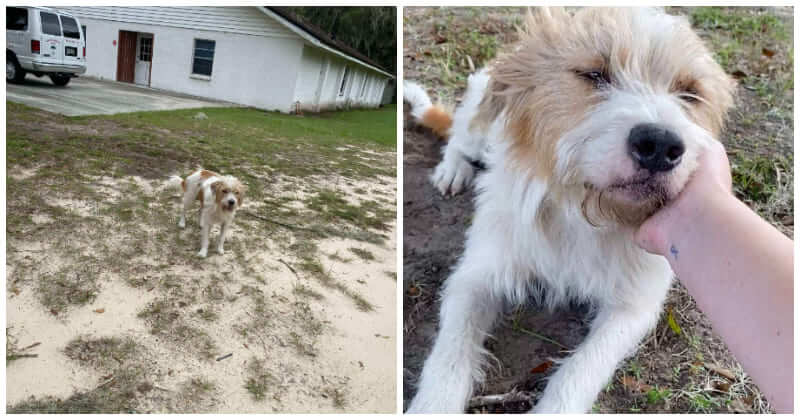 When a stray animal learns to trust humans for the first time, it takes a lot of time and effort. A woman has waited 10 days with all of her tenderness for a stray dog to decide to trust her. Thankfully, she managed to win his heart. Carley Coca, who has been volunteering at Paw Print Hearts Rescue since she was young, knew that she needed to save three abandoned puppies at a Florida church after she noticed them on Facebook. For more than 10 years working at a rescue, she has never rejected a chance to help animals.

She arrived at the church and quickly was able to take two of the dogs, Zeus and Lily, into her car. The other one, Chance, however, refused to let her approach him. He was extremely scared and barked as the only way to defend himself, and finally, ran away. Coca had no choice but left him behind. Although it broke her heart, she knew that she wouldn’t give up on the poor dog. At least, his two companions were rescued to safety.

In the next days, Coca kept returning to meet Chance every day. After work, she would drop in a store, bought him some food, and drove to him.

“When I got off work for the day, I’d go to McDonald’s and get 10 plain cheeseburgers, then drive out to the church, which was approximately 30 minutes away,” She explained. “I’d go to Chance’s sleeping shack and announce my presence — then I’d sit at a distance (selected by Chance) and chuck him cheeseburgers for up to three hours at a time.” In the first five days, Chance didn’t change his attitude. He would flee whenever Coca tried to get closer. Even though she tried to bring his friend Lily, he was still much cautious with her.

However, from the sixth day, things started to change little by little. “Chance would wait for me to get to the church by sitting at the end of the driveway rather than hiding under his shed,” Coca said. “However, he still wouldn’t let me go near him.” And on the eighth day, Coca approached Chance more gently, and this time, he didn’t run away. The poor dog was determined he was ready to trust her, laying down and sniffing her hand before she could pat him for the first time. “I put my hand on top of his head and began petting him,” Coca recalled. “I was worried about how he’d respond; I was worried he’d bite, but he didn’t. He seems almost relieved. I began to cry, joyous tears.”

After days of trying, the kind-hearted woman was able to put Chane in her car, give him time to rest and heal. She promised to bring the dog a better future.

After taking the dog to the vet, she drove him to her home so that he could start treating the fleas, ticks, and burrs. “Chance is doing absolutely amazing,” she said. “I love being able to see his personality come out each day. You can tell how grateful he is that he is finally safe. He’s still fearful of other people, but we’re working on it a little bit each day!”

Right now, Chance is living in the best love and care he needed. He’ll stay with Coca for three months until his fleas are treated completely and he is ready for adoption. Best wishes to Chance and his mom, Coca!