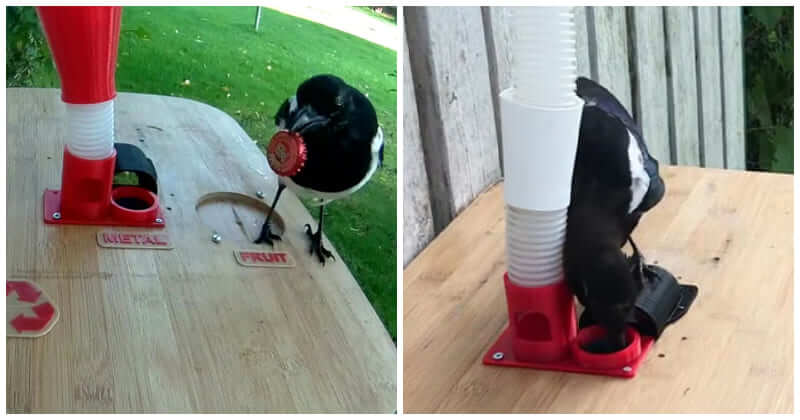 It’s always fantastic to see animals accomplish meaningful tricks that we’ve already taught them. And, it’s amazing when animals can be trained to do something helpful for the environment. Hans Forsberg, who works in robotics and the AI industry, has recently got a chance to put his knowledge to good use in real life. One day, he noticed a family of magpies that had been living in his backyard for years.

Magpies are known for being smart and curious about their surroundings. Forsberg continued observing these birds until he saw them finagling with the complex locks on his outdoor lanterns. Curious little critters were searching for paraffin candles inside the lanterns. Then, Forsberg asked himself, “Why not let them do more meaningful tasks?” –  because they do love stealing. He invented the machine that allowed the birds to get the food they wanted if they put something in exchange. In this way, the magpies had to collect trash in his garden when they needed food. The machine was designed with a dispenser to store peanuts and animal kibble, a receptacle to be filled with trash (like bottler caps), a tube, and a base to transport the food. When a bottle cap was added to the receptacle through a hole, the dispensation of food began. One to two peanuts would be dispensed through the tube and landed on the base with a small compartment from which the magpies took their treats out. The whole process was captured in a camera that was attached to the main box. According to Forsberg, this was a brand new design for him, but it was the most creative idea he had ever tried. Adult magpies seemed to be cautious at first, but then they joined the younger ones to keep the environment clean. However, in fact, completing the project was no easy feat at all. The most difficult part was to create vibrating motors and moving parts in the dispenser. The graphic user interface that logged the progress and the status of the bird box also took a lot of effort. Over several years, he has trained the neighborhood magpies to recycle trash and rubbish from his house. Many wild birds are invited by the feeder, but only a few can figure out how it works. Here is a clip that Forsberg captures when one of a few magpies understands his machine and constantly collects bottle caps for food.

In the future, Forsberg hopes to move on to bigger and better things such as fallen fruit and cigarette butts. Anyway, he has done a good job, right?

Injured Dog Makes Miraculous Recovery After Being Given To Shelter

What Is The Cutest Rat? 7 Most Beloved Types of Pet Rat Breeds

Two Tiny Kittens Found On The Street Without Mom, Held Each Other Tight And Refused To Let Go