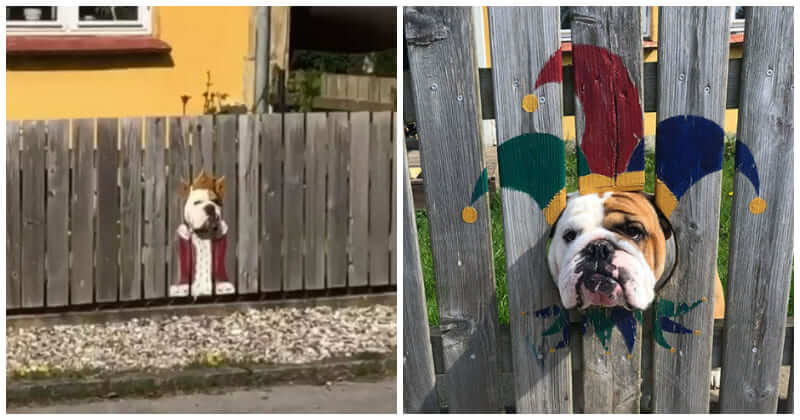 For some reason, animals always know to entertain us with their cuteness and purity. And if you are finding a way to end your day with laughter and fun, there is a viral funny video of a bulldog that has taken the Internet by storm for the way it watches the street.

Everyone, meet Bogart, a 4-year-old English Bulldog and also the critter that has gone viral recently. Bogart is living with his two brother dogs, his mom Ranveig, and his dad Claus in Gråsten, Denmark. Their house is located near a walking path, where people go across every day, and that makes the dogs curious. Ranveig, however, doesn’t want them to skip the fence and go down the busy road. Dogs are not aware of possible risks and dangers when they stay alone. Therefore, the woman makes some holes in the fence, and it turns out it looks so funny from the other side.

“But even if it was funny to see them from the other side, I just thought it would look even [funnier] if we painted something,” Ranveig thought, and came up with the most creative idea than ever.

A little costume including a crown and a jester’s hat was painted on the outside of the fence where Bogart often peers out, making him a real “King of Road”. And, can you imagine how funny it is when passersby look at him from their view? Below is the footage filmed by strangers as they saw Bogart ticking his head out to see the road. The video has been reshared and amassed thousands of likes.

Ranveig reposted it on her Facebook, writing: “Bogart has gone viral in Denmark—he has also got on one of Denmark’s biggest influencers’ Instagram profile, and now I can see that he’s [on] a Norwegian dog group too.”

To describe Bogart, the woman said that the cute dog has always brought her positive energy. “He has a [unique] personality, and he is so funny—I really do love that little guy.” Ranveig and her husband have a good sense of humor, so they don’t mind showing more pictures in which they make jokes of other dogs as well. You can see that Bogart isn’t the only one to get in on the fun! Little Special Kitten Grows Up To Be Her Mom’s Soulmate