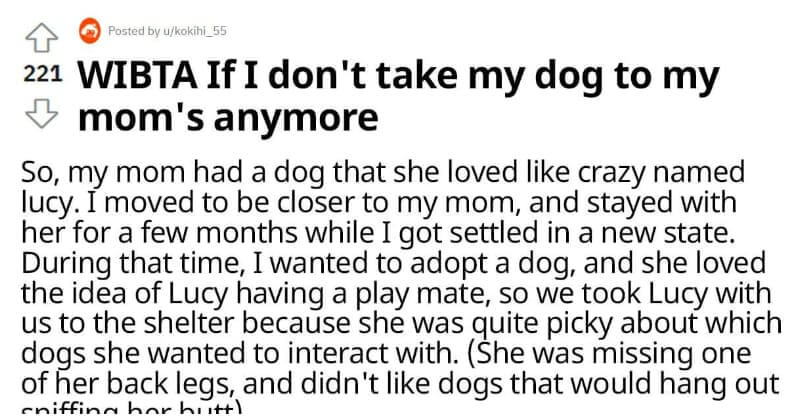 Just ask some dog owners and they’ll tell you a dozen of reasons why you should raise a dog. These furballs always know to make us feel happy and relieved after stressful working hours. The companionship they share with us is something we all love and appreciate.

Therefore, losing a pet is not easy, especially when it becomes so close to us. It will take quite a long time to grieve over a deceased dog who used to be a part of our life. That’s the story Redditor kokihi_55 brought to us telling how her mother’s life was impacted after she lost her dog, Lucy.

Lucy passed away from cancer just after the beginning of the Covid-19 pandemic, which upset the mother so much. Before that, Lucy formed an instant friendship with a dog she met at the shelter, Dexter, whom the OP adopted soon after.

The mom, however, seemed not to really like Dexter at first. But after Lucy’s death, she started treating Dexter like mother and son. She became possessive of the dog thinking that it was Lucy’s offspring. Of course, that was something the OP couldn’t agree with. Have a look at the full post below. The OP wanted her mom to understand that Dexter was not hers. When the mom denied that, she decided to stop allowing her mother to keep the dog. She would no longer bring it along whenever she came to visit her. She wanted to know whether she is TA for doing that.

An overview of Redditor’s responses shows that the OP is not at fault. Some people sympathy with the mom’s emotional damage after losing her dog, but they think she is trying to replace Lucy with Dexter.

It’s about time for the mom to get a new dog after two years of living without her companion, Lucy. However, it is the way the OP reacted that makes their problem more complicated and harder to be solved. People suggest that she try to talk with her mom again so that she knows about her behaviors and she should be warned about it. Dexter is the OP’s dog, so no one else can claim it from her. It is her right to either give it to someone or take it back from someone.

More and more people are taking the side of the OP. Man Criticizes Some People For Dumping Dogs In The Country, And Reddit Community Give Him A Big Applause

Meet Macy, A Little Brave Yorkie Pup Who Fends Off Coyote To Save Her 10-Year-Old Owner