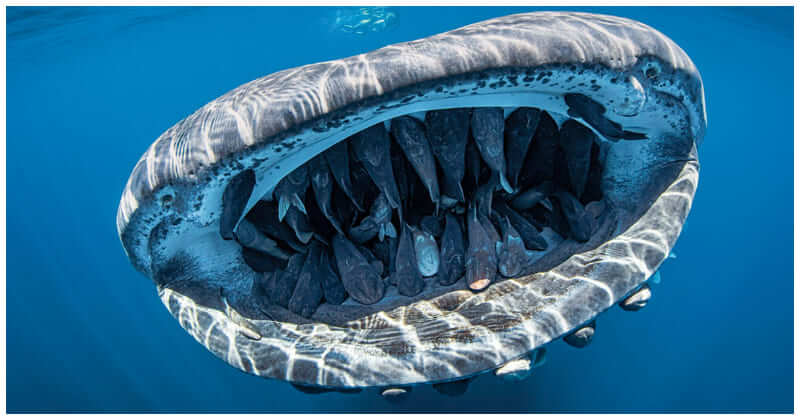 For 16 years, the “Through Your Lens Underwater Photo Contest”, held by Scuba Diving Magazine, has been great underwater photography inspire for many divers and photographers. This year’s contest came up with a great result!

Winners were chosen among 2,636 photos, which was the highest number throughout the competition’s history. Judges worked so hard to find out the five best images to be recognized as one grand prize winner and four categories of 1st place winners: Behavior, Compact Camera, Macro, and Wide Angle.

This year, the grand prize went to photographer Evans Baudin whose photo featured a majestic whale shark holding more than 50 fish in its mouth. The picture captured the close encounter with the whale shark, making it a “mind-blowing and jaw-dropping image” according to the magazine. Evans Baudin photographed the picture in Baja California, Mexico. He also wrote a description for it:

“In June 2020, with a special permit, I went on an expedition to document marine life and the effects of reduced sea traffic due to C.O.V.I.D-19. After two hours in the water with a school of silky sharks near the surface, our captain yelled, ‘Whale sharks, right behind you!’ – a 12-meter-tall female. The surprise was doubly when I found out about 50 remoras were peacefully enjoying a free ride in her mouth!”

The whale shark is the largest marine animal that can reach up to the maximum size of 20 meters. They often collaborate with small fish by letting them clean their teeth and take a ride where they want to go in their mouth.

Check out below the other winner photos of the year: 20+ Cats That Deserve An Oscar For Their Dramatic Performances

Dog Hides In UPS Truck And Rides All Over Town, Wears Note With Important Message For All