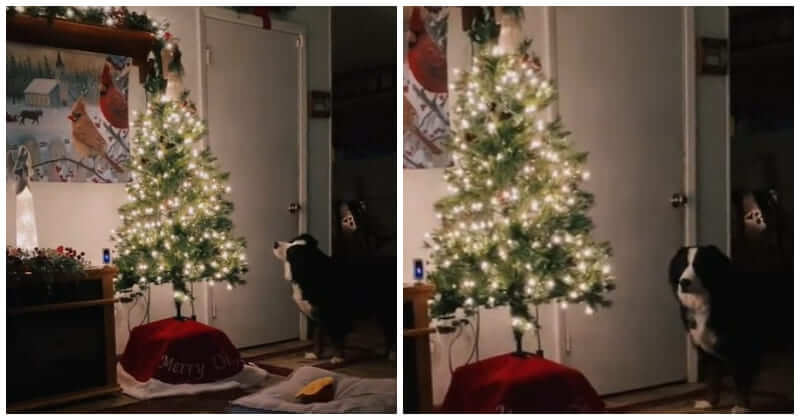 Christmas is coming. Such an important holiday is an occasion people can spend time with their family, chill out with friends, or just stay home and watch “oh-so-funny” videos. Recently, a viral clip in which a Bernese Mountain dog thinks the Christmas tree is talking to him has brought laughter and warmth to millions of hearts. The Tiktok video has been viewed more than half a million times, attracted tens of thousands of likes and hundreds of comments. Watch it here:

A two-year-old Bernese Mountain named Daisy was sitting in front of the family X-mas tree when she heard a sound coming from the branches wishing her a Merry Christmas. As an immediate response, the dog adorably tilted her head side to side while throwing confusing eyes at her mother, Shannon, who was filming the moment.

The TikTokers wrote in her caption: “Daisy thinks the Christmas tree is talking but it’s my husband talking through the Ring.” Her face was like “Mommmmm guess what I’ve heard… a tree can talk, and I’m just finding out now!!” Even an Antarctica iceberg struggles not to melt for that sweet and adorable moment. People said they fell for the video, especially Daisy having her confused head tilt side to side. One user commented “I love her head tilt she thinks the tree is really talking,” and another wrote “Beautiful and that head tilt is adorable.”

If you are a pet user, we suggest the clip should be on your list of Christmas must-see videos. Whether Daisy could figure out that was her dad talking to her and not Santa, we are sure her cuteness will make your day. Girlfriend Got Sulky With Her Partner For Over-Mourning His Put Down Cat, And Reddit Is Completely Divided

Guide On How To Understand Your Cat

Man Refuses To Pay Medical Bills After His Dog Attacked His Neighbor’s Cat, Gets Support From Reddit

Rare Dog Goes Viral After Being Mistaken For A Statue