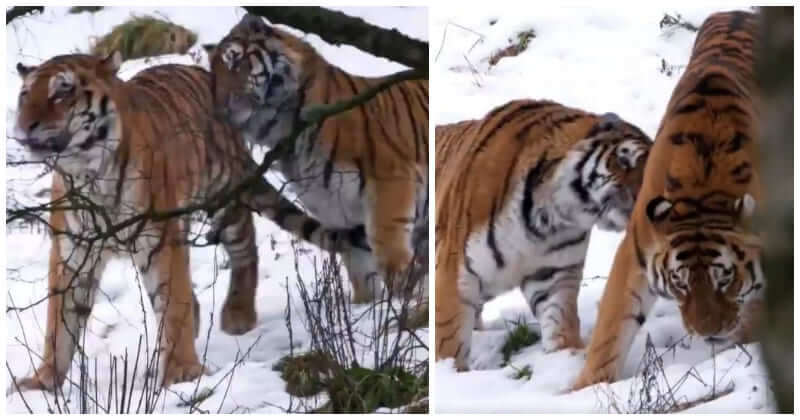 Tigers are solitary animals, so they just gather to hunt very large prey or to mate. The Highland Wildlife Park (Scotland) has recently witnessed a romance scene when Amur tigers, Dominka and Botzman, snuggled up and rolled around in the snow. The 30-second footage captured the moment Dominika and Botzman walked together, with Dominika rolling on her back in the snow. Apart from calling and scent marking, this was also a sign that the pair were smitten with love.

According to the staff, Dominika, born in May 2020, was introduced to Botzman who enrolled in the park in October 2020. The pair first met each other in late January 2021 and created an instant bond with each other. On February 1st, 2021, Highland Wildlife Park was happy to share their video on Twitter with the caption: “Botzman and Dominika, our Amur tigers, were recently introduced by our expert keepers and it’s safe to say, so far they’re kitten… oops, we mean smitten.”

Botzman and Dominika, our Amur tigers, were recently introduced by our expert keepers and it’s safe to say, so far they’re kitten… oops, we mean smitten 😍

Fingers crossed for the pitter patter of tiny stripy paws in the future. pic.twitter.com/uo9NfGrW0a

In the next days, the zoo kept an eye on the pair to make sure they were still together. They hoped two Amur tigers would end up having their babies.

“We are encouraged by how well the new couple is getting on so far and are hopeful they will have cubs in the future as part of the European endangered species breeding program,” said the spokesman for the wildlife conservation charity. The Amur Tiger (or Siberian tiger) is an endangered species with fewer than 4,000 individuals in the wild today. Hunting and deforestation are mainly responsible for the vast decline of these animals. Each female Amur tiger can give birth to litters of 2 to 6 cubs.  The babies rely on their mother for food and protection for 18 months and remain with her until they are two or three years old.

Meet Yana, The Two-Faced Kitty Whose Parents Ran Out Of Ink