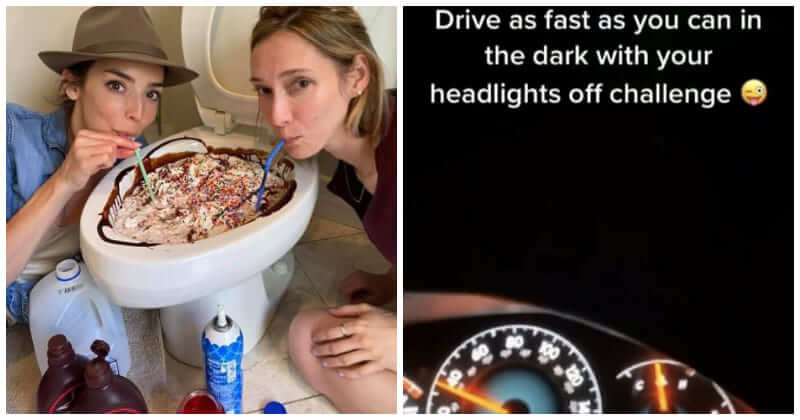 We’ve heard a lot about ‘influencers’ these days. They may have expertise and knowledge in some particular areas and hence have so many followers. They may be famous, and their opinion can influence lots of people. However, not that everything they do is right. Many people are willing to do such crazy things to gain attention on the internet. Some are mildly infuriating, while others are a total disgust. The craving for popularity can make people lose the ability to judge if things they do are okay.

Now and then, some people are posting their trashy videos and pics online. They exploit the curiosity, sympathy, and even hate of others to make them more famous. Of course, they will become more well-known, but more like in a negative way. They’ll become the subjects of criticism, and others will shame them for their disturbing actions. Down here, we have collected some pics of crazy things people have done for temporary online fame. Let’s scroll down and check them out now.

#1 Because of course it was self defense #2 Everything must have a react video #3 You should have known the limit #4 “Instagrammer” says it all #5 Her IQ test came back negative #6 Great way to end your life, and possibly some others’ #7 There are an unbelievable amount of stupid people amongst us #9 Influencers jailed in Bali for fake mask video prank, to be deported ‘as soon as possible’ #11 I know, people worldwide are struggling for food, so I will destroy some #13 DESERVES to be run over

#14 Harassing people… as a prank. Try it with me and get a free punch in the mouth #15 The face of the cashier #16 That should be: how to invite tons of ants to your house #17 Is this becoming a thing somewhere? #19 Hot glued a toilet onto your head. Now you are officially a shithead Want To Gain Extra Credits On Your Exams? Answer These Hilarious Questions!

25 Hilarious ID Pics That Deserve To Be Stamped In History

Hilarious Yard Signs You Wish Your Neighbors Had

20 Autocorrect Fails That Will Make You Laugh Like A Drain

Waiter Gets Irritated When Customers Tip Him Only $3.28, Doesn’t Expect A Pleasant Surprise The Next Day