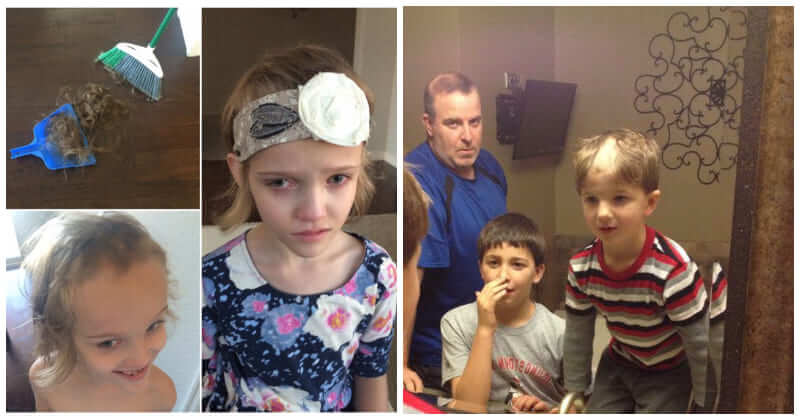 One efficient way to save money is to cut your hair at home instead of having it done at a salon. However, it’s always easier said than done. Cutting your own hair requires more than just a comb, scissors, a clipper, and a mirror. Skills are the most important. And it seems like our home-barbers don’t have that much experience. That’s understandable. People need to take proper training and months of trials before they officially become a barber. Because we cannot hope for the best here, so let’s hope it’s not the worst.

Doing a haircut on our own is hard even for adults, so you can imagine what it could be if a kid tries to do that. Anyway, letting kids do things by themselves is a way to build independence, so just wait and see. People are sharing pictures of their kids trying to do a haircut, and they’re hilariously bad. It’s good when they have figured out that clippers would simply shave their head instead of making them a nice mohawk. Lessons need to be learned most directly for the best result. Now, scroll down to take a look at those epic haircut fails made by kids in the list below.

#1 My client’s daughter cut her own hair. I am a hairdresser. She asked me if I could fix it. NOPE #2 Avery cuts her own hair, she loves it #3 He wanted a Mohawk. He used “daddy’s brush” aka clippers #4 He wanted his hair to match his daddy’s! I found him in the playroom with my peanut trimmers cutting off all his pretty red hair! #5 My daughter gave herself this haircut last week. She proudly declared that she cut it like Caillou #7 My daughter cut her own hair one day. I thought she looked a lot like Joe Dirt. It didn’t bother her at all! #8 My 8 year old niece doesn’t know how hair works. She got tired of her bangs so she cut them off #9 His older brother thought that this was funny. His father does too! #11 The only thing you need is a smile, and you have it #15 My daughter cut her own hair at her dads Humorous Grandparents That Everyone Wants To Have

People Are Sharing The Dumb Things They Believed As Kids, And They Are Insanely Hilarious

Funny And Weird Coincidences That Make People Question The Reality