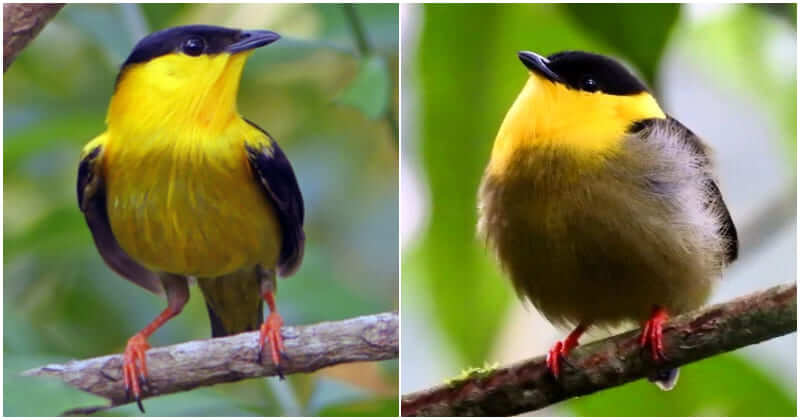 A small and rotund bird of Central America which is unsuspected until he puts his fascinating collar band in use.

The Golden-collared manakin (Manacus vitellinus) is a bird species in the Pipridae family. This small-sized bird is endemic to Panama and western Colombia. The natural habitats of this species are subtropical or tropical moist lowland forests, dense understory of forests, secondary growths, and forest edges.

The male bird appears with a stunning bright yellow collar that fades to olive-green down his chest. He wears a black cap and his back is also in black, which turns to dull green on the sides. He has a short black tail with orange-red legs.

The female bird is unadorned with dark olive-green plumage, slightly brighter on the underpart. Overall, these birds are tiny and plump with big heads, and they look especially cute when puffing up their feathers.

During the breeding season, male Golden-collared manakins gather up at a lek to compete in a courtship display. They perform acrobatic dance movements and use vocalizations to court females. The males produce a specific “chee-poo” sound during this time.

Once the female has chosen a male, she builds a nest from fibers, leaves and animal hair, then lays two eggs inside. Those eggs are colored like fallen leaves and hatch after 12 to 14 days. The female raises the chicks without her partner’s assistance.

Golden-collared manakin can interbreed with White-collared and White-bearded Manakins. The hybrid male appears with a distinctive yellow upper back.

This bird is a common and widespread species in its range and is evaluated as Least Concern by IUCN.

WATCH AND LISTEN TO THIS BIRD IN THE VIDEO BELOW: