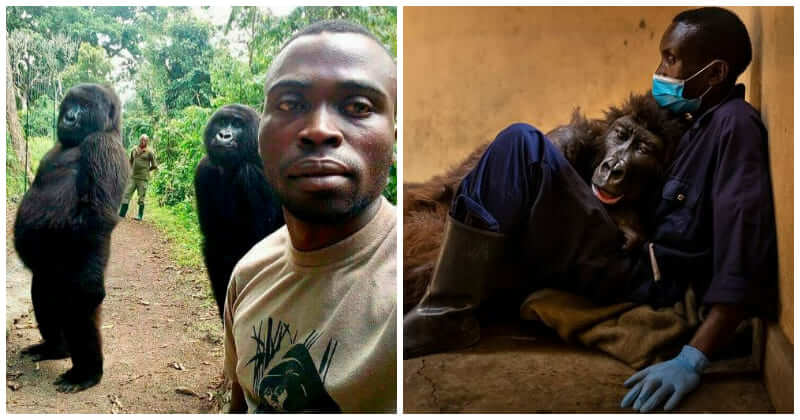 Ndakasi the mountain gorilla whose selfie rocketed global fame has passed away at fourteen, in the arms of her beloved caretaker Andre Bauma.

The friendship between Ndakasi and Bauma bloomed in 2007, when he found the gorilla, 2 months old at that time, clinging onto the lifeless body of her mother.

In 2019, Ndakasi, along with Ndeze the orphaned female gorilla, was taken to Virunga park, the Senkwekwe Centre. There started their fame after a selfie of the pair became viral on Internet. Posted in 2019, the photo showed a park ranger, Mathieu Shamavu, posing for a selfie with Ndakasi and Ndeze behind him. But maybe, viewer’s attention was mostly towards Ndakasi, who was looking over her left shoulder, peering to the camera, chin down. After fourteen years of her notable life, on 26 September, Ndakasi “took her final breath” following a battle with “a prolonged illness in which her condition rapidly deteriorated”, as stated by the park.

Along with the announcement, the park shared a heartbreaking photo when the majestic animal bonded for the last time with her lifelong friend. Ndakasi leaned her head on Bauma’s chest while he was holding her hand. The scene reminded us of what happened fourteen years ago when Bauma kept her tightly in his chest, reassuring her from her mother’s d.e.a.t.h.

“It was a privilege to support and care for such a loving creature, especially knowing the trauma Ndakasi suffered at a very young age,” Bauma told the media. “One could say that she took after her mother, Nyiransekuye, whose name means ‘someone happy to welcome others’.”

“It was Ndakasi’s sweet nature and intelligence that helped me to understand the connection between humans and Great Apes and why we should do everything in our power to protect them.”

He shared: “I am proud to have called Ndakasi my friend. I loved her like a child and her cheerful personality brought a smile to my face every time I interacted with her.”

“She will be missed by all of us at Virunga but we are forever grateful for the richness Ndakasi brought to our lives during her time at Senkwekwe.”

Ndakasi, like other mountain gorillas, are under the threat of being poached for food and sale. More than 600 rangers are working hard every day to protect the lives of these gentle giants in Virunga park, Congo. We’ll never forget such a great human-animal friendship like that of Ndakasi and Bauma.