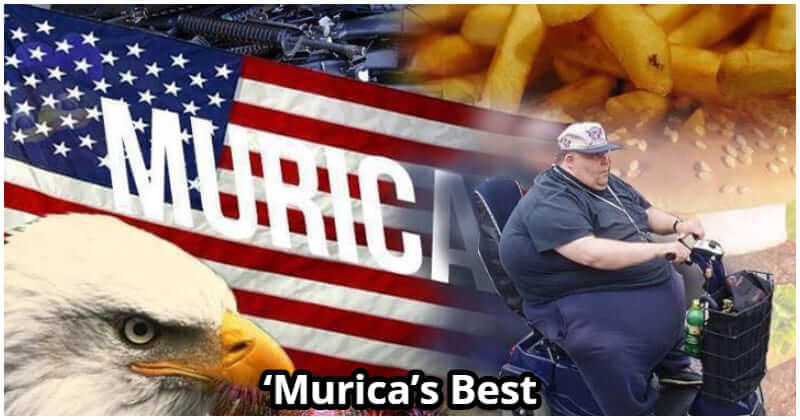 Even though the US is a multicultural country, there’s something about this land that is unique. People act and perceive things according to common sense and knowledge, but those “common” things may not be the same all over the globe. And to be fair, that’s understandable if such a big country that lies completely in the Western Hemisphere has something uncommon to the rest of the world.

When people point out the differences and incomprehensible things about the US, they turn out to be unexpectedly hilarious. And we wonder if the Americans can understand their differences or not. We have selected some of the strangest things Americans do that others can’t get about. Let’s check them out in the list below.

#1 Acting casual: Americans, especially tourists, tend to dress a bit more casually than most other people would. They’ll wear regular ol’ T-shirts and khaki shorts to the beach, a restaurant, a play, you name it. At least it makes them easy to spot! #2 Using Feet: As a person from, well, anywhere else in the world, it’s hard to fathom why the U.S. still uses the imperial measuring system. Twelve inches, three feet, 1,760 yards… It’s a lot more complicated than necessary. Oh, and freezing temperature should be zero #3 Ice Ice Baby: Why do we need ice in everything? If a drink has been refrigerated, it should be cold enough, right? In fact, adding all that ice makes it uncomfortable to sip and makes it watery fast. Not everything needs to be on the rocks #4 Coffee Run: Speaking of beverages, what’s up with drinking piping hot coffee while we’re on their way to work? In other countries, you take the time to drink coffee at home, at your desk, or on a bench if you’re out. How do Americans do it? #5 Bathroom Breaks: Compared to most western nations, public bathrooms/restrooms/powder rooms/ are pretty dirty. Not to mention the giant gaps between the stall and the door. Privacy, please!

#6 ‘Murica’s Best: Almost everyone has a sense of pride for their home country, but Americans take it to the next level. There are flags everywhere you look, and people won’t stop talking about “freedom” and “the troops.” #7 Taxes For All: In most places around the world, price tags end with “.99.” This is also the case in most stores in the U.S., except when you’re ready to check out, you’ll find a completely different total in your receipt. Include the tax in the price for goodness’ sake #8 Working Hard or Hardly Working: America, give your workers some time to rest! Jobs in the U.S. tend to have longer work days and less vacation time. Plus, depending on your position, you might have to answer calls and emails after hours. Yikes #9 Fantasy Pharmacies: In most corners of the world, a pharmacy is a place where one picks up prescriptions, bandages, and some toothpaste at best. They definitely don’t have snack food, batteries, balloons, or seasonal decorations #10 Time To Tip: Yes, we understand that servers are underpaid in the U.S., but the fact that the customer has to make up for that in tips seems absurd. Plus, you have to tip hairdressers, cab drivers, baristas, and everyone else whose service you already paid for #11 Small Talk: It’s not that Americans are particularly friendlier than people from other cultures, but they do like to chat it up with strangers. And the phrase “how are you?” when nobody cares about the answer should be scrapped from greetings altogether #12 Fry It Up: As if most snacks weren’t unhealthy enough, Americans love to deep-fry them. This oil isn’t just for french fries, it’s for Oreos, Snickers, dough, sandwiches, onion, chickens, hot dogs, butter, pickles, donuts, ice-cream, and even mac and cheese #13 PB&J: Alright, peanut butter and jelly sandwiches are pretty delicious, but also so sweet that you can barely call it a sandwich anymore. To make matters worse, American bread slices are loaded with sugar too. What’s with the sweet tooth? #14 Pushing Drugs: In most other countries, you visit a doctor, and it’s entirely up to them which medication they may or may not prescribe to you. So commercials in which a happy family kicks a ball around before hearing the 600 deadly side effects of a drug come off as a little strange

#15 Cheerful Cheerleaders: Sure, sure, they’re here to motivate the teams, yadda yadda yadda. Are the sports teams not motivated enough? Or are the scantily clad female dancers there for a different reason after all? #16 Comfort Creatures: Why on Earth do Americans wear their sweatpants, or even their pajama pants, out in public? In most cultures, those are considered house clothes, not something you wear to a coffee shop or even work. Not everything is about comfort 20 Deceiving Photos That Make People Doubt Their Own Eyes

Neymar’s Dramatic World Cup Falls Have Been Transformed Into A Free Font, And It’s Hilarious

Laugh Out Loud With These Incredibly Funny Tweets About Foods