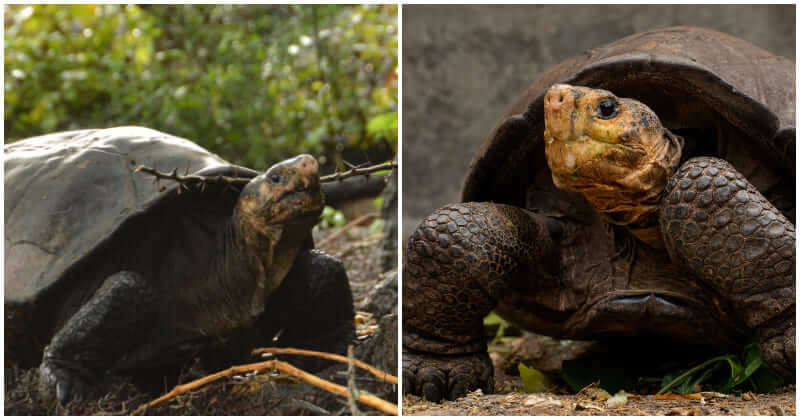 The Fernandina Giant Tortoise disappeared more than 100 years ago. The first time a confirmed sighting of this species was registered was in 1906; the specimen was a male. But this is the only time the species has ever been found. No confirmed live tortoises nor remains were found until an expedition in February 2019. And for Washington Tapia and his team, the discovery was like winning an Oscar. “For me, it was the most important achievement of my life because I have been working on tortoise conservation for 30 years,” said Tapia, the director of the nonprofit Galápagos Conservancy’s Giant Tortoise Restoration Initiative (GTRI) and leader of the expedition. “This was basically my Oscar.”

Tapia and his team – Jeffreys Malaga, Eduardo Vilema, Roberto Ballesteros, and Simon Villamar – plus Forrest Galante, a host, and biologist with Animal Planet made this significant discovery on February 17th, 2019. They set out to find the species among green patches on Fernandina island, an active shield volcano and the youngest of the Galápagos Islands. Luckily, they found and followed traces on the ground, and Malaga was the first to spot the tortoise, in the middle of the day. The female tortoise was thought to be roughly 100 years old. The area she was living in lacked stable food sources and it’d be difficult for the team to find her again in this rugged terrain. So Tapia decided to take her to a breeding center on Santa Cruz Island. The team took blood samples of the tortoise and sent them to Yale University to confirm the species. The process could take months or even more, but Tapia was quite sure she was the real thing. And eventually, on 25th May 2021, officials announced that genetic tests had confirmed that the female tortoise is indeed a member of the Chelonoidis phantasticus species. Her DNA sequence matched the sample collected in 1906. This is promising news to all scientists. As tortoises can live up to 200 years, the female tortoise still has plenty of time to help bring back her species. The Galápagos Conservancy has raised more than 7,000 tortoises in captivity that were then released into the wild, bringing them back from the brink of extinction. Tapia had a firm belief this time as his team also found some more tracks in the soil just about one mile from where they discovered the female. For Tapia, the discovery of Fernandina Giant Tortoise has so much more meaning.

“Tortoises in the Galápagos are like ecosystem engineers,” he said. “They contribute to seed dispersal and mold the ecosystem. That ecological role is so important.”