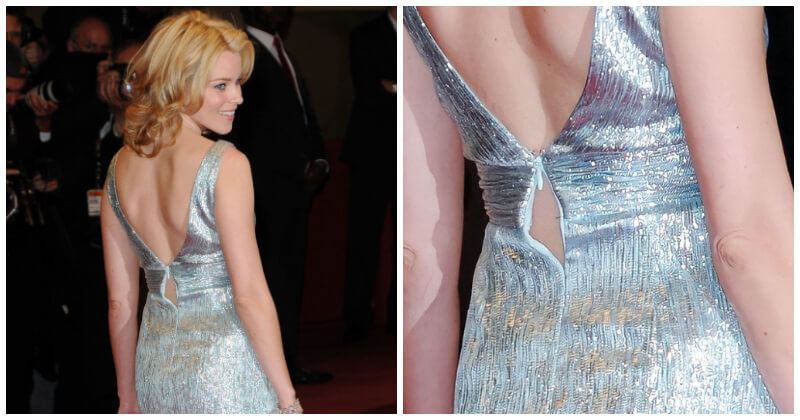 Have you ever had a tear in your shirt, a hole in your pants but didn’t notice it? Well, at this time, a great embarrassment comes. And you’re not alone. Plenty of celebrities prove that even the most glamorous stars suffer from cringy moments.

As a celeb, the cameras catch everything. Sometimes, it doesn’t matter how much double-stick tape you use, wardrobe malfunctions are unavoidable. Even with teams of assistants and stylists swarming them to ensure everything goes their plant but sometimes things just go wrong. These moments come as a surprise and we’ve seen a lot of embarrassment.
Case in point: Saweetie’s peek-a-boo moment, Katy Perry’s split pants, and Charli XCX’s slight slip off the shoulder. In addition to them, there are many cases that make us laugh out loud.

We’ve rounded up 17 celebrity wardrobe mishaps. Keep scrolling down to see them. If you want to see more, click here, here, and here. Margot Robbie’s dress got untied while walking the red carpet in London in 2016. Luckily, her colleague Alexander Skarsgård was there to help her out. One of the presenters at the People’s Choice Awards in 2016 accidentally ripped one of the straps on Dakota Johnson’s top, but the actress managed to gracefully keep everything in place. Jessica Chastain and her gorgeous dress were fighting strong gusts of wind at the Cannes Film Festival back in 2014. Beautiful actress Elsa Hosk lost her earring while strutting the red carpet at the Venice Film Festival in 2019. Robert Downey Jr. was so excited about the Iron Man 3 movie premiere that he didn’t even zip his pants up properly. Amal Clooney’s gorgeous gown gave her a headache at the Cannes Film Festival in 2016. As she struggled with its long train, her hubby lent a helping hand. British designer Stella McCartney almost took off Rihanna’s skirt when her heel tangled up in the fabric at the 2015 Met Gala. Ben Affleck appeared at the Suicide Squad premiere in 2016 with his pants unbuttoned, his shirt half tucked in, and his belt buckled far outside the loops. Sarah Jessica Parker experienced an unfortunate moment at the And Just Like That premiere this year when the handle of her purse fell off. Elizabeth Banks wore a zipper-breaking tight dress at the Cannes Film Festival in 2009. British television star Lydia Bright needed lots of strength to prevent the wind from revealing her underwear when she attended The Duke of Essex Polo Trophy in 2011 in England. Kim Kardashian had a problem with her gorgeous green dress that started to come apart in the back. Part of Katherine Heigl’s dress fell off as she was accepting the Female Star of the Year Award in 2010 in Las Vegas, but she handled it with a smile. Actor Brad Pitt was blissfully unaware of his unbuttoned trousers as he posed on the red carpet at The Curious Case of Benjamin Button in Paris in 2009. Dame Helen Mirren was caught by surprise as her earring fell off while talking to a reporter. Lily-Rose Depp experienced a wardrobe malfunction when a gust of wind moved her plunging top in an unwanted direction at The King premiere in 2019.