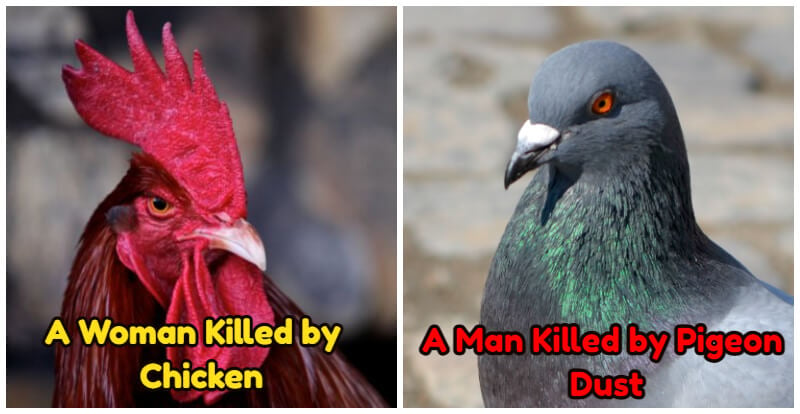 Do you have a variety of cockatoos or parrots in your cages because you think they’re fantastic pets? Or have you experienced a different experience, such as a bird pecking at you when you’re collecting eggs? Regardless of your experience, we have gathered these uncommon incidents of death caused by birds-which many people perceive to be a harmless species in the world. After seeing it, you’ll probably have a different opinion about ravens and seagulls.

Deaths caused by birds are uncommon, but they do occur and can be rather frightening! Here are 10 such murders causeby our feathered…friends.

Pigeons are supposed to be ambassadors of peace. However, this rare case will make you reconsider it.

Bill Brailsford was a champion pigeon fancier for nearly 80 years. Braibeginlsford kept his winning pigeons, sometimes as many as 170, at his Derby home. In September 2010, the 91-year-old died from extrinsic allergic alveolitis, a lung disorder resulting from repeated inhalation of organic dust.

Brailsford’s grandson, 47, blamed the toxic dust created by the birds. “Pigeons were my grandad’s life; now he has been killed by them,” he said. After cleaning the birds out of his grandfather’s house, the younger Brailsford battled pneumonia and feared he was suffering from the same condition.

“I would advise other pigeon fanciers to wear masks and probably not to keep so many,” he said. The coroner, who attributed the death to exposure to dust from pigeon droppings and bird food, recorded the death as accidental.

An unnamed 76-year-old woman was gathering eggs from her rural Australian property in August 2019 when she was pecked to death by a rooster. The bird’s beak punctured a varicose vein, which hemorrhaged and caused the woman to collapse. She died from blood loss before paramedics arrived. In addition to her varicose veins, the victim had also been diagnosed with hypertension and Type II diabetes.

“Even relatively small domestic animals may be able to inflict lethal injuries in individuals if there are specific vascular vulnerabilities present,” read a report in the Journal of Forensic Science, Medicine, and Pathology, adding that the freak incident shows how vulnerable the elderly are.

3. A Child Killed by Martial Eagle

A town in the Somali region of Ethiopia was under attack… by a terrifying martial eagle. Residents of the area believed all of the repeating attacks came from the same bird.

In September 2019, at least three children were pecked or clawed by the vicious bird. One woman was in her house when she heard her son screaming. “We rushed outside the house. I saw [the bird] holding my son on the ground and biting him,” she told the BBC. “He was crying ‘Mother… Mother!’ I ran to him and threw a stick at the bird.”

The action likely saved the boy’s life because another child was not so lucky—he was clawed to death. Armed with shoot-to-kill orders, police began actively hunting the vicious eagle. Authorities believe that the rogue eagle mistook children for its usual prey.

4. A Man Killed by Ostrich

In June 1999, Linda Carter was shocked to discover her father, 81-year-old Fred Parker, lying dead in an ostrich pen on her exotic animal farm near Seattle, Washington. Parker, who was afraid of ostriches according to his family, was living in a recreational vehicle on Carter’s farm. While alone one weekend, he took responsibility for feeding his daughter’s ostriches, emus, llamas, and pot-bellied pigs.

Carter explained that the ostriches were supposed to be fed by throwing food over the fence and was unable to explain why her father had entered King Tut’s pen. The 400-pound bird stomped or kicked Parker and broke the man’s neck. It’s thought that Parker’s bad heart may have contributed to his death as well.

One year earlier, King Tut kicked Carter, sending her flying more than 3 meters (10 feet). She defends the bird and maintains her booming business of selling ostrich meat and skin. “I have no intentions right now of destroying my ostrich because of my father’s death,” she said. “The ostrich was protecting his domain. It’s just like any wild animal. You don’t go in a bear’s pen; you don’t go in an ostrich’s pen.”

The Taung child, unearthed in South Africa in 1924, is a hominid skull believed to be 2 million years old. It was long thought that the 3- or 4-year-old was killed by a leopard or a saber-toothed tiger.

But in January 2006, Johannesburg paleoanthropologist Lee Berger asserted that the Taung child had been scooped up by a large bird of prey that ripped out and ate the child’s eyes. The murderous bird was likely a crowned hawk-eagle, which still today preys on small primates in Africa.

The Taung child’s skull revealed bone damage that distinguishes bird-of-prey kills from those of big cats. “These critical clues were puncture marks in the base of the eye sockets of primates, made when the eagles ripped the eyes out of the dead monkeys with their sharp talons and beaks,” Berger said. “It was a marker that others hadn’t noted before, that linked eagles definitively to the kill.” The marks on the Taung child were perfect examples of eagle damage.

In August 2021, an Australian woman was holding her 5-month-old daughter when a magpie swooped at them. As she attempted to avoid the bird’s dive-bomb attack, the mother tripped and fell. Baby Mia died from the head injuries she sustained in the fall.

Magpies, which grow to about 40 centimeters (15 inches) long, are native to Australia. They are notorious for aggressively defending their nests, especially during the July to December breeding season. The sharp-beaked black-and-white birds are a protected species in Australia, where it is illegal to kill the bird or remove its chicks or eggs from the wild.

But Queensland’s “Magpie Alert” website logged 1,231 magpie swoops in 2020. Thousands more were reported across the rest of Australia. More than one in ten people swooped by magpies suffer injuries. In 2020, a Melbourne man nearly had his eye plucked out by a magpie. In 2019, a 76-year-old Sydney man died of head injuries after crashing his bicycle while attempting to avoid a swooping magpie. And in 2018, a child in Perth was almost blinded when a magpie attacked his face while he sat in his stroller.

“Swooping season only occurs when the male magpies are defending the chicks in the nest,” said Sean Dooley from BirdLife Australia. “While it’s only the male magpies that swoop and only 10 percent of males do swoop… the consequences, especially when people are caught unaware, can be truly terrifying and devastating.”

7. Tragedian Playwright Killed by a Turtle

A carrion bird was blamed for the unusual death of 67-year-old playwright Aeschylus. In 455 BC, the “Father of Greek Tragedy” died when the high-flying bird dropped its tortoise dinner on the man’s head.

The bird, most likely an eagle or vulture, had likely mistaken the top of Aeschylus’s bald head for a rock or hard surface suitable for shattering the tortoise’s shell. The lammergeier vulture, common in southern Europe at the time, carried large bones high in the air and dropped them onto rocks before descending to feed on the exposed marrow (a technique that also worked for tortoise shells).

Ironically, according to Naturalis Historia by Roman author Pliny the Elder, the tragedian Aeschylus had intentionally spent time outdoors to avert a prophecy that he would be killed by a falling object.

Native to Papua New Guinea and Australia, the cassowary is considered the most dangerous bird on the planet.

The cassowary’s weapon is its claws. On each three-toed foot is a 12.7-centimeter (5-inch) toenail, “probably the closest thing you’ll find in nature to a railway spike.” The deadly talon can disembowel a human in an instant. The cautious, defensive, flightless bird rarely attacks without provocation, but it doesn’t take much to provoke it.

A Florida man who raised cassowaries was killed by one of his own. Marvin Hajos, age 75, fell between two cassowary pens in April 2019. The motion either startled one of the cassowaries or simply presented the opportunity for the bird to attack Hajos through the fence. The medical examiner said that Hajos died from the trauma inflicted by the bird and added, “I know ostriches and emus have their moments, but cassowaries are an extremely, extremely dangerous bird. You don’t want to fool around with them. They have no sense of humor.”

Cassowaries are bred for their meat in New Guinea, where they remain part of the diet. But in the U.S., they are more likely bred for high-paying hobbyists who want to add the monstrous bird to their exotic animal collections. Following Hajos’s death, the killer bird went up for auction with 100 or so fellow exotic animals kept on the Florida property.

9. A Man Killed by Cockerel

In southern India, in February 2021, 45-year-old Thanugula Satish was killed by his own cockerel at an illegal cockfight. The young rooster had a 7-centimeter knife—a “kodi kathi”—attached to its leg and impaled its owner in the groin while attempting to escape the fight. Satish bled to death on the way to the hospital.

Police searched for the dozen or so people involved in the event—they faced charges of manslaughter, hosting a cockfight, and illegal betting. The knife-wielding rooster was sent to live on a farm but will be called as evidence at the trial.

In January 2020, 55-year-old Saripalli Venkateswara Rao died after his throat was slashed by his bird’s kodi kathi. While raiding an illegal cockfight in October 2020, Philippine police lieutenant Christine Bolok bled to death after a rooster’s blade sliced his femoral artery.

10. An Old Man Killed by Turkey

In April 2019, an unnamed 70-year-old biker died after being hit by a wild turkey. The victim was riding his motorcycle when several turkeys began to cross the road in front of him. One of the turkeys took flight and hit the man in the chest.

The man, who was wearing a helmet and protective clothing, lost control of his bike and hit a guardrail post, severing his leg below the knee. Medics transported him to a nearby hospital, where he died from his injuries. Spring is the breeding season for wild turkeys in the East North Central U.S. The birds can become aggressive at this time, occasionally even charging, threatening, and acting aggressively toward people.

Aubtu.biz is a website that provides you with entertainment updates and creative ideas to brighten your day. Don’t hesitate to visit our site to know more about updated animal pictures and news.

This Dog Was Seen Helping Her Human Sister With The Laundry