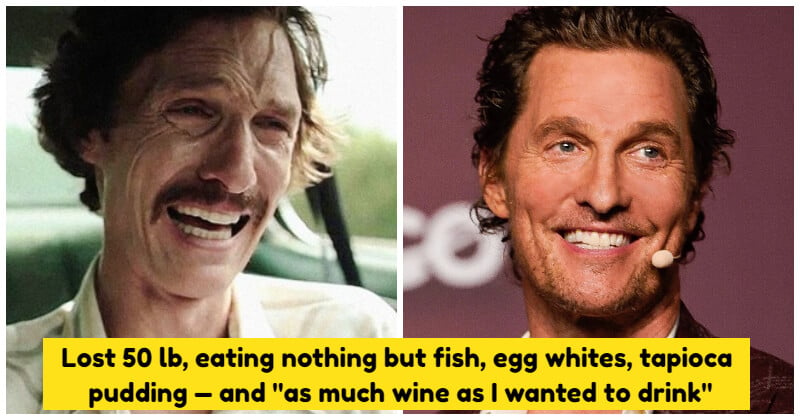 Some believe that acting is only hard because you have to memorize lines and if you could remember, you would be an actor. We guess that professional actors must be burst out laughing after hearing the saying. To the uninformed, acting doesn’t require years and years of intense training. Indeed, for them, acting is not a thing.

So, how hard can acting be? It is incredibly hard that takes an amount of skill and dedication. It often goes far beyond slipping into character to deliver a few lines, wearing some make-up or perhaps a fake wig or mustache. Some sacrificed their figure for extreme weight gain, others went on dieting for months for a role-proper weight loss. After all, it really is not so easy to be a famous actor.

Below are 12 actors who dramatically changed their appearance for a role. To perfectly fulfill his role in “Dallas Buyers Club”, Jared Leto lost 30 lb and even went shopping for groceries while in character. His effort was rewarded with an Oscar. The actor shared, “Your body goes through weird stages. Sometimes it’s hard to hold on to water. But for me, it’s not about the most weight I can lose – it’s more to represent the character”.

Charlize Theron underwent a dramatic transformation for her role in “Monster”. She gained 30 lb, dyed her hair, shaved her eyebrows, and wore prosthetic dentures. Makeup ruined her skin, looking stained and aged. For his role as Irving Rosenfeld, Christian Bale gained over 40lb, got a combover, slouched and ended up herniating two of his disks.

Gwyneth Paltrow, who played an obese woman in “Shallow Hal”, had to go through 4 hours of makeup. For her makeup, no one recognized her in public.

Matthew McConaughey lost over 50 lb when starring as an AIDS patient in “Dallas Buyers Club”. His unusual approach involved eating nothing but fish, egg whites, tapioca pudding — and “as much wine as I wanted to drink.” He stated, he probably “lost 35% of his energy”.

To achieve the physical traits of his character in “Southpaw”, Jake Gyllenhaal experienced an intense workout: 2,000 sit-ups a day, 8-mile runs, and core/weight training. Cate Blanchett had a great performance, portraying music legend Bob Dylan. She not only wore a wig, and sunglasses but men’s clothing and even a sock down her pants. She said, “It helped her walk like a man”.

Marlon Brando received praise from critics and fans for his performance as gangster Frank Costello. Besides losing weight, he stuffed his cheeks with cotton, wore a mouthpiece made by a dentist, and wore a lot of makeup to help him look older. For his role, he won an Oscar. To portray a transgender, Elle Fanning put on men’s clothing along with her dark and short hair. Although the movie received some criticism, her performance was generally acclaimed. Rooney Mara lost a considerable amount of weight to give her character in “The Girl with the Dragon Tattoo” a bony appearance. Every piercing she had was real. She even kept her right nipple one, in case of possible sequels.

12+ Extremely Witty Details In Movies That Most People Missed

15 Times Supporting Actors Stole The Show With Their Brilliant Acting