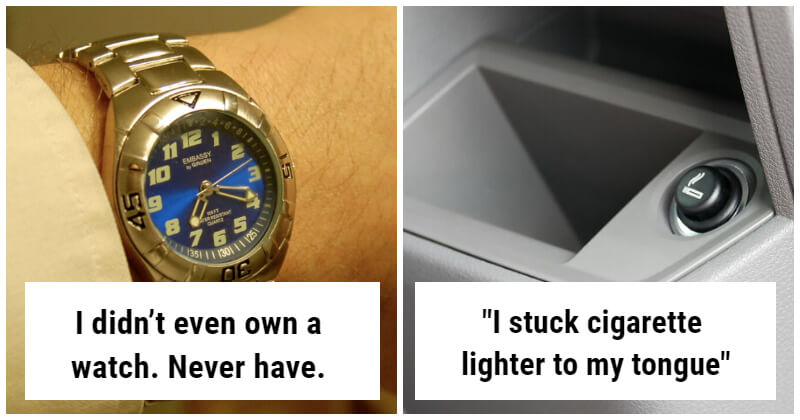 Even the brightest among us are capable of making mistakes. Call it a brain fart, a lack of clarity when making decisions, an irrational inclination, or a momentary mentality of “whatever happens, happens” where, for a split second, everything sort of makes sense, even the things that generally don’t.

Unbeknownst to them, the question “What is the craziest thing you’ve ever done for absolutely no reason?” unlocked a Pandora’s box of amusing tales. Consider opening the door of a moving car out of curiosity rather than following your father’s strict instructions not to do so at all costs.

#1 Thinking That One’s Own Hand Is Somebody Else’s I woke up one night. Saw a hand on my pillow. Started to freak out, froze. Waited. Decided I’d move. Screamed and jumped when the hand moved.

It was my hand.

#2 Killing A Pint Of Vodka, Straight, On A Dare Let’s see, where to start.

I once killed a pint of vodka, straight, on a dare. Spent the rest of the night ralphing.

I fell for a prank of laying a stick across a shovel handle and then stomping the shovel spade to see how high the stick would go.

I had my windshield tinted to 5% on my car.

I sent a Nairobi prince some cash so I’d get a big return. I really did.

I volunteered for several things in boot camp without knowing what they were.

I rear ended a cop car. During the questioning, I got the involuntary giggles and when the cop asked if I thought it was funny, I said “Yes.”

In little league, I chased a ball under the bleachers from the back side. Imagine running fast as the bleacher seats get lower and lower. Cracked my head open.

Hit on a starting linebacker’s girlfriend at a frat party. I even knew it was his girlfriend.

Noticed my “low oil pressure” light on in the car; decided I could make it to the next exit 10 miles away.

Took bowling as a HYPERS class in college. Cheated on the final exam and got caught.

Decided to jump in the water to p**s; left the boat in gear.

Spent a half hour trying to pick up a quarter someone had super glued to a sidewalk.

I’m really not as dumb as all this sounds. I’m just…impulsive. Late for work, running around the house looking for my keys. Ran upstairs, saw them on the desk, pointed at them and said to the air, “There they are.” I was nearly to the front door before I realized I didn’t actually pick them up.

#4 Losing An Opportunity With A Girl Of One’s Dream The girl of my dreams came back to my place after dinner and drinks, we had been friends for a long time but never a hint of anything more.

I was in a sleeping bag, on the floor. She told me “Hey, you can jump up under the quilt to get warm” and my response was “Oh, this sleeping bag is really warm!”

It wasn’t until the next day that I realized what I had done.

…Wow. Thinking about this makes me really depressed 🙁 I once started talking s**t about a friend who I’d forgotten we had just picked up and was sitting in the backseat of the car. This one still keeps me up at night. One of my ex’s and I met in the city. We always went on dates in the city and never close to where we lived. I had just moved to the area, I had heard of the place he lived in but didn’t think it was close to where I lived, and never really thought about it. Then I started staying over at his place, and when I was going home the following afternoons I would take the tram into city centre (~20 minutes) and then get the bus to my house (another ~40 minutes). I honestly thought the village he lived in was far from my house so I took the route I knew. Turns out he lives a 10 minute walk away. I did this like 8 times. I stapled my finger to see if stapling my finger was possible. can confirm, it is. Opened up a carton of orange juice and noticed it said shake well before use. Proceeded to violently shake the holy hell out of the carton as it rained vitamin C goodness over the kitchen and me. Housemate walked in and asked “what the f**k is wrong with you?” as if I’d done it on purpose and was thorougly enjoying my OJ shower.

#9 Accidentally Calling A Student That Just Passed Away I work as a substitute middle school teacher. At the beginning of each day the kids listen to the announcements. One time they announced that one of the students who had been battling cancer passed away the night before.

So me, being the great guy I am, give the students five minutes of time to sit quietly and reflect. Then I decide to lighten the mood by calling attendance, so I use a bizarre inflection to entertain the students.

Called out “Tyler?”, no response. Call it out again, no response. Finally one student piped up and said that was the kid that died the day before.

This was after I called his name out several times with differing tones of voice to be comical, while all the students saw was me bashing the dead kid. F**k.

#10 Asking A Barber What He Does For A Living Barber while cutting my hair asks ”what do you do for a living?”. I replied “I’m an accountant. You?” Someone asked me what time it was and I lifted and rotated my wrist so I could look at my watch. I was holding an iced tea and just poured the whole thing into my lap.

I wasn’t wearing a watch.

I didn’t even own a watch. Never have. I jumped up and (successfully) bit the string that is used to pull the attic door down. It had a metal bead on it… Immediately after I remember thinking “holy s**t I actually got it in my mouth and broke the string”. Then I realized the string was still there, but half my front tooth wasn’t. I chopped an aerosol paint can in half with an axe. I was far old enough to know better but my cousin and I thought we had it worked out. My mom always said, “One kid, one brain; two kids, no brains.” Boy was she right. I was yellow for a week. Maybe not the dumbest but a recent one on my mind. I was in my office with the door closed. Got up from my desk to walk out and knocked on the door before opening it and walking into the hallway. Went to a coffee shop and ordered a large cup of coffee. Barista hands it to me and I put it into my purse with no lid. We were driving to a restaurant and wanted to see how long the wait was. My dad handed me the phone book and asked me to look up the number. I, for whatever reason, thought he said “get rid of this”. So I opened the window and chucked the phone book while we were going 70 MPH down the highway.

That was over ten years ago, I still get s**t for it. You know those old cigarette lighters in cars? Nobody in my immediate family smokes, and when I was younger, I pressed it in and it popped out.

I pulled it out to inspect – it was just grey coils – it didn’t look red hot or anything. So I tested that sucker the best way I knew how. I stuck it to my tongue. During a traffic stop, while trying to act casual, I handed a police officer $50 instead of the licence he asked for.

When I was a kid I went into my parents bathroom. I found my dad’s razor and I decided to scrape it against my tongue, my whole tongue. I started screaming in pain immediately after. I once told my roommate I was going out of town, but really hid under his bed for 5 hours so I could freak him out that night.

If You’re Feeling Down About The World, These Wholesome Images Will Lift You Up

Wholesome Posts That Give Us Hope For The Next Generation

25 Pictures That Prove Iceland Is Actually Another Planet

20 Times People Photographed Stuff That Nightmares Are Made Of

Worst Newspaper And Magazine Layout Fails That Are Unexpectedly Funny

20 Ridiculously Funny Police Sketches That Make You Choke On Water

19 Unusual Tattoos To Help You Express Your Personality, And They Are A Feast For The Eyes

28 Cool Designs That Make You Scream Out: “I Want It”

Mother Clarifies The Reason She Never Compels Her Son To Share Anything, Even His Toys