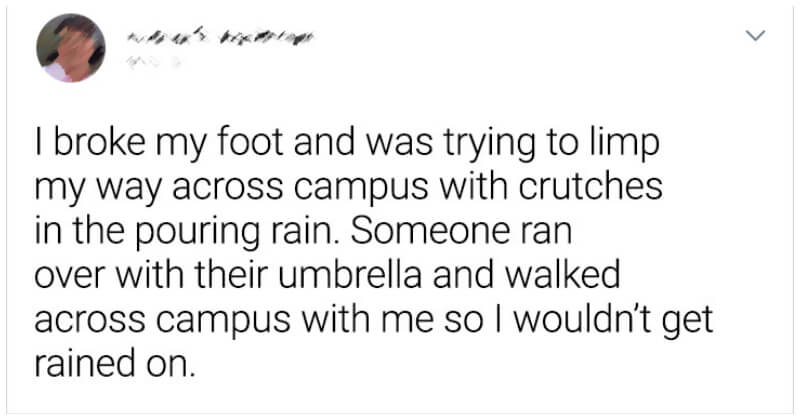 A simple question about how someone’s day is going can make their day better. A nice act is an act of love. There are many kind people in the world, and we encounter them at the most random times. Everyone merits the wonderful gift of being kind to one another. I was out of a job at a time when I had to support my mother. Finally, landed one, but I had to walk back and forth, and I didn’t have any shoes that would hold up on the walk or the work. Posted on Facebook that I was looking for old shoes that are for sale, and a day later a very kind man showed up with a brand-new pair of really nice shoes he had just gone out and bought for me. He left before I could even get any money for him. I was on a long late-night bus ride. Halfway through the trip, it made a stop at a small town station, so people could grab a snack. I went up to the counter to buy what at that point was my dinner even though it was after 10 p.m. and when the cashier rang it up I passed a $50 bill to her, and she told me that she couldn’t make a change. Defeated, I went back to my seat on the bus. As everyone piled on and the bus drove away, a lovely middle-aged lady walked up from her seat near the back and politely asked if I minded if she sat with me. I told her she was more than welcome. She sits and proceeds to unpack a small lunch bag.

She then split the entirety of her meal with me. She said she had been waiting for the washroom to clear out and had overheard what happened. She said: “I’ve gone hungry in my life, and it sucks. I wouldn’t wish it on anyone, so you can share it with me.” I had been out of work for several months due to the hurricane hitting my area very badly. I drove a really old beat-up car. While stopped at a stoplight, I thought the person in front of me was going as soon as the light turned green, but they didn’t, and I rear-ended them.
We both pulled over, and she said to me that she wasn’t worried about filing any insurance claims or having me pay to fix it. Instead, she said she wanted a hug. I was at a very low point, and it was a hug I really needed. She could probably tell I couldn’t afford to fix the scratch, and her kindness meant a lot to me. I ate at a Mexican restaurant and unknowingly threw away my car keys on my tray when I was done eating. I went and asked a worker if he had cleared them off the table, and he said no, but that he had just taken the trash out to the dumpster. Left, and called my dad for a spare key, but he said he didn’t have one.
So, I went back inside feeling humiliated and about to ask if I could look through the dumpster, only to see that this man had already dug through the dumpster on my behalf and ended up finding my keys for me. He just went above and beyond and to this day I am so grateful for his help. I was driving home from university. Then, the engine died as I exited the freeway, and as I was pushing my car out of the intersection, a guy in a truck comes up and offers to push my car to my neighborhood a good 3 miles away. He does so and, as I’m pulling into my neighborhood, he simply gives a wave and drives off into the night. I never even had a chance to thank him. I was in New York taking a lunch break at a job I absolutely hated. I was sitting, eating alone at McDonald’s and after about 15 minutes this man in his 40s comes up to me and says something like, “Hey man, you look really sad. Things will get better,” and just shook my hand. Takes a lot for one adult man to offer that up to another strange man. Really cheered me up. I was 9 years old, waiting for the school bus during winter. I had a thin coat, no hat or gloves. A woman saw me and stopped, went back to her car and got me a blanket. It was a long, skinny one, so she wrapped it around my head and shoulders like a big scarf. I told her I didn’t know how I would give it back when I was done borrowing it. She hugged me and said not to worry. I still have that blanket. I took my sister, who was in a wheelchair, to the movies for the first time on my own. Afterward, I realized I couldn’t undo the brakes and was blocking everyone. I felt like crying because I thought everyone was angry at me, but some nice lady helped me, then took me and my sister out. She said she once had a son who needed a wheelchair. At work, I was complaining about heartburn once. I was still pretty new to the job. Didn’t really have any work friends. Felt like an outsider. My life outside of work was pretty bad. The bartender on shift overheard me and ran to a nearby coffee shop to get me chocolate milk. It definitely made the heartburn go away, but it was such a needlessly kind act. 16 Stupid Things Kids Did That Adults Shared Online For Everyone

If You Know What These Technology Items Are, You’re Already Old

This Man Is A True Genius, Automates Job And Gets Paid For Doing Nothing For 5 Years

20 Times Weddings So Tasteless People Just Had To Document It

17 Times People Forget To Read The Manual Instruction Of Life

Try Not To Laugh At These Hilarious Vacation Photo Fails

New IT Head Steals Legacy Email Address From Older Employee, Gets Fired For Not Living Up To It

People Are Sharing Funny Stories Of Frustration On The Trend ‘What I Wanted Vs. What I Got’

20 Things With Unexpected Turns That Will Make You Say “Wow, That Escalated Quickly”

“Never Come Back To My Restaurant”: Chef Returns $1,350 Bill Of Rich Patrons Who ‘Disrespected’ His Employee, Bans Them From Restaurant

Super Strange And Crazy Ads People Have Ever Posted On Craigslist