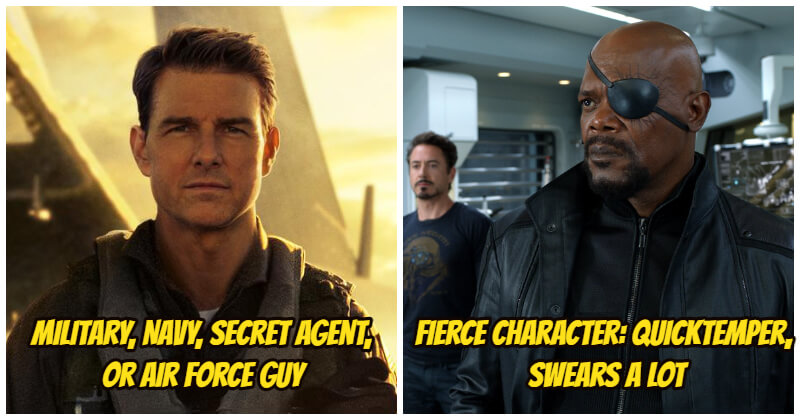 What makes a good actor? I used to believe that the best answer is the ability to portray various types of characters. And many talented Hollywood stars truly surprise us with their different roles in various movies. They can be kind men that impress us with their sweetness in one movie but strong fighters thrilling us with their stunts in others. Or even that they become criminals with many schemes that make us forget their last roles as a good person.

However, many actors are known for playing one type of character in all movies they star in. Still, no one can’t deny that they’re also brilliant actors. For example, Dwayne “The Rock” Johnson rocks the world with his chasing scenes, while Jennifer Aniston seems to be a lover girl of one she initially hates in all their movies.

We enlisted 18 actors and actresses who always appear as the same type of character throughout all movies. Though this list is far from exhaustive, it may make you wonder how these well-known stars can keep charming viewers with just one type of role in every movie. Tom Cruise has graced the silver screen for years with a plethora of excellent roles in hit movies, including “Edge of Tomorrow”,  “Valkyrie” or “Jack Reacher”. The 60 years old actor sticks to roles related to the military, navy, secret agent, or air force. Still, he wants a role where he can do something that thrills him, like performing stunts.

Speaking of his acting career, he shared: “It’s a strange thing, being handed so much power to do whatever you want to do.” Will Ferrell is a household name in comedy, best known for his appearances in “Anchorman”, “Daddy’s Home”, The Other Guys, and especially his time on Saturday Night Live. Despite his accomplishments, it’s difficult to distinguish his characters in each film he’s appeared in. They’re all ridiculous, aloof, and humorously obnoxious. K-Drama fans can recognize Ken Jeong, albeit in movies for only around 5 minutes. But he always makes his 5 minutes memorable with his uniquely hilarious playing. Can’t believe that? Just try The Hangover series, Crazy Rich Asians, The Duff, or Role Models. Milla Jovovich is well-known for portraying this beautiful girl who can fight anyone. She can wrestle, throw punches, do karate, and wield any weapon. She’s essentially the feminine equivalent of Vin Diesel. Her films include Resident Evil, The Messenger,  The Perfect Getaway, and Ultraviolet. Micheal Cera always plays a hated guy who ends up winning the girl with his innocence and natural humor in every movie. From “Superbad” (2007), and “Juno” (2007), to Scott Pilgrim vs. the World (2007), all of his roles emanate awkward and dorky feelings. Usually appearing as a sweet, handsome, and supportive guy, James Marsden’s roles tend to be a perfect boyfriend or a husband but always loses his girls. X-Men, Enchanted, Superman Returns, and The Notebook is great examples. Bruce Willis is so familiar with the type of nearly-bald badass, caught up in something wicked that only he can conquer with his pun, his ability to get out of sticky circumstances, his moral uprightness, and his unforgiving will. Although he occasionally plays more than one role in his films, he has generally played roles in Die Hard, Unbreakable, and The Fifth Element. Jason Bateman consistently portrays this mature, responsible character who makes an effort to act morally upright, speaks quietly, and never swears. He struggles a lot to show that he is unselfish, humble, and all of those things. You won’t even need to recall his character’s name to recognize him in Hancock, The Switch, or The Change-Up because he appears in all of them practically exactly the same. This guy likes portraying attractive roles. In most of his performances, such as those in the Magic Mike series, 21 and 22 Jump Street, Step Up, and Dear John, he plays the popular, fit, cool guy that every female wants.

Even though he has recently been working to improve his image, perhaps soon he will, for the time being, he stated, “I’ve done things where I thought they were going to be financially successful, and they failed. For me, the only thing I can be super sure of at the end of the day is whether I’m proud that I made the movie, even if it never comes out.” The “Girlfight” star, who first gained notoriety for her roles in “The Fast and the Furious” and “Avatar,” plays the role of the savior in most of her movies. Rodriguez’s roles tend to be a large, difficult-to-crack female character who is accompanied by numerous weapons, kicks, and punches.

She shared: “Throughout my 15-year career, I’ve always had this battle. I represent this specific demographic: Tomgirls. You don’t have a lot of them in Hollywood, and audiences respect that. I need to represent those little girls or women who think I’m cool.” This is typical Steve Carell: a decent person with a dash of sarcasm and a suit. His characters constantly have to deal with a female who breaks up with them or with him attempting throughout the entire movie to get one; he’s always a “nice boy” with impeccable comedic timing. As an illustration, consider the films “Crazy”, “Stupid Love”, “Get Smart”, and “40-Year-Old Virgin”.

“I never thought that I would become a comedic actor. My intent was to try and make a living as an actor. I sort of fell into the whole idea of comedy. It’s nothing that I ever trained to be or thought I would be.” He explained. An unbreakable man with a British accent who loves acting smart, driving, hitting, and shooting. Statham tends to play the roles of secret agent, rogue agent, assassin, or transporter. He serves as the non-James Bond films’ equivalent of James Bond. You can see him doing a fantastic job with the Mechanic, Transporter, Fast and Furious, and Expendables series. The man is a born thug; nothing can faze him in either real life or in movies. He typically portrays a fierce character who has a quick temper, swears a lot, and carries an aura of a person with unquestionable confidence. His on-screen charisma is astounding, whether in “The Hitman’s Bodyguard”, “Pulp Fiction”, or “The Hateful Eight”.  It’s interesting to note that he claimed in an interview, “I am not as cool as people think I am.” Hugh Grant enjoys portraying cute characters in every drama or romantic comedy. In films like “Notting Hill”, “Bridget Jones’s Diary”, “About a Boy”, “Love Actually”, and “Two Weeks Notice”, his charm and good looks make him the ideal chocolate boy. Just a warning, but he’s in every movie your girlfriend wants to watch with you. Jennifer Aniston tends to be an untidy lady on-screen who works as a waitress or “damsel in distress” who frequently falls in love with the person she dislikes the most. Try “Just Go With It” “The Bounty Hunter”, and “The Switch”, you can feel the same. Adam Sandler has starred in a number of hit-or-miss comedies and has even ventured into romantic films with Drew Barrymore. He frequently plays the stupid leading man who needs to learn a lesson and usually has a love interest to help him navigate the story. You can check that at “Grown Ups”, “Billy Madison”, “That’s My Boy”, and “Big Daddy”