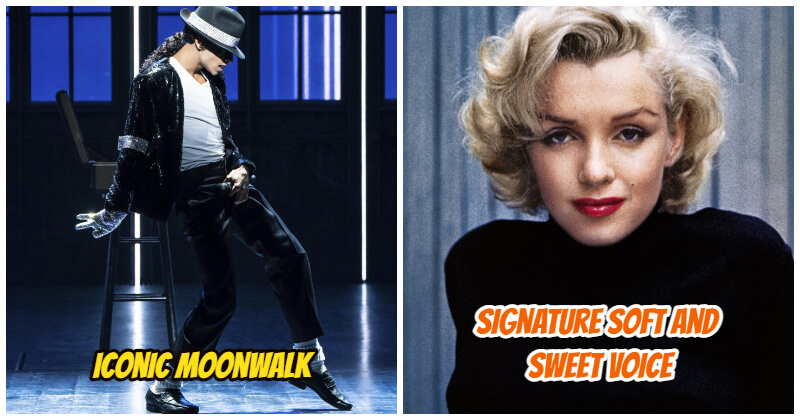 Famous people always emanate amazing vibes that inspire a lot of people. That’s why many fans try so hard to imitate their idols, including their voices, styles, manners, and even facial expressions. Some people who master celeb impersonation leave a massive impression on some costume parties, especially on Halloween.

Some who are crazy fans even spend a fortune to transform themselves into their idol’s look-alike. That sounds crazy, but that’s not out of the ordinary. It’s hard to forget the X-Factor audition of Lorna Bliss, who is so similar to the “One More Time” singer.

In fact, you can have an adequate impersonation if you can get their signature manner, voice, or quote. Some singers and actors are so iconic that it’s easy to pronounce and move like them. If you are looking for famous people to impersonate, these 10 following ones are a good start. Scroll down and check them out now! Michael Jackson is considered the King of Pop Music, so far there are a million people who have impersonated him and covered his moves. M.J is known for his signature moonwalk, anyone who saw that wanted to do that move. It seems to take ages to learn, yet if you got some trick, you can do it smoothly like Michael. To imitate Michael, you also learn some high kicks, dance, shuffle, and of course, his sexy crotch grab. If you’re bold enough, try to learn the 45-degree tilt dance move, and you will take your MJ impression to the next level.

Vocal-wise, Michael Jackson possesses a soft voice that could hit a high pitch. Try to mimic that, and throw in a “shamone” every once and a while, you’ll be as cool as MJ. As one of the most recognizable pop culture icons in Hollywood history, it’s not a tall order to impersonate the usually gorgeous Marilyn Monroe. Just take a little time to get her mannerisms and voice down, and the remaining part is just a cup of tea. The crucial thing here is not the custom or the hairstyle, but the signature voice. You should attempt to make your voice as soft and sweet as possible. Ariana Grande can capture all of Dion’s eccentricities and nuances just at a moment’s notice, suffice it to say how easy it is to impersonate the “My Heart Will Go On” singer. Take more attention to her French-Canadian accent and signature chest smack, also don’t forget to extend your words. Of course, if you have singing skills, you can nail that without working up a sweat. There are literally thousands of Elvis impersonators in the city of Las Vegas alone. His strong baritone, distinctive lip curl, and southern drawl have all been imitated by many performers. For actors to get into character, he also offers a variety of looks. The voice will draw attention, whether they mimic the Ed Sullivan program from way back when or his late-career appearance.

Even just the “King Of Rock and Roll”‘s vocal range has influenced Johnny Bravo and other pop culture figures. He has sideburns and a pompadour, and he sounds just like Elvis. In reality, it is really easy to pass for the vocalist. Nothing prevents you from donning a bejeweled onesie and attempting to sound like Elvis Presley. Christopher Walken is one of the most recognizable voices in Hollywood, whether he’s requesting more cowbells or comparing himself to a mouse that churns cream into butter. It nearly sounds like Walken is impersonating himself because of how distinctive his voice and speech cadence is. While he isn’t, a lot of other individuals undoubtedly are.

Everyone has given us their best Walken, from Bradley Cooper to Howard Wolowitz. The fact that you don’t need to have the voice down pat certainly helps. Almost everyone will be able to identify you after you master the intonations and speaking style. Imitating Cher is easy indeed, all you need is just an exaggerated hair toss and add a wide-mouthed “hoooooo” after everything you say. So what you’re waiting for, try it on now. It’s a lot of fun to imitate Nicholson thanks to his distinctive voice and expressions. Countless celebrities have tried to imitate him throughout the years. In “A Few Good Men,” before Nicholson gave his epoch-making statement, Cruise’s character made a strong impression on the audience. He demonstrated how to make your face pucker and change the pace of your voice to mimic the image.

These crucial components also enabled Robin Williams to completely outdo himself in his “Aladdin” portrayal. We’re inspired to try our hand at the “Here’s Johnny” moment after seeing actors have fun with their Nicholson impressions. Thanks to his thick Austrian accent, it’s quite easy to imitate Schwarzenegger. Everyone will immediately understand it even if you don’t pair it with one of his catchphrases. However, if you add phrases like “I’ll be Back” or “get to the choppa,” your job is successfully completed. Jess Robinson, an impressionist and “Britain’s Got Talent” finalist, claims that there are only five steps required to imitate Liza Minelli. She advises in her video to make it difficult to determine if you’re about to laugh or cry by speaking from the back of your throat. After becoming proficient with these techniques, you can practice your impression by attempting to turn off a lamp in front of a friend. Everybody wants to imitate Sean Connery’s iconic introduction. To nail that, you should put on your best Scottish accent and drop your voice a couple of octaves. Even if it isn’t ideal, it won’t be difficult for people to adopt it right away. If you’re truly committed, you can get a shaken, not stirred, martini. You may now kill it at your upcoming dinner party!