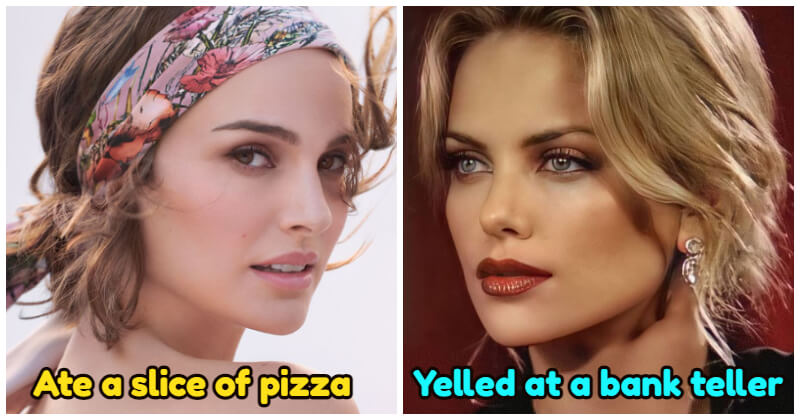 Hollywood can be seen as a cutthroat environment. Millions of youngsters have struggled to make it in the entertainment industry but are suffering rejection after rejection. To become an in-demand actor, many make an endless effort like staying in acting class or doing their best at every audition. Their efforts can’t be denied.

However, some people are lucky and get discovered by sheer chance. Maybe they were simply eating a slice of pizza (Natalie Portman) or just getting out of a cab one day (Tippi Hedren). Of course, that doesn’t mean they weren’t working extra hard or lacking an ounce of talent. In the extremely competitive entertainment industry, it does help to be in the right place at the right time.

We’ve rounded up 11 real stories of how actors were discovered. At age 14, Jennifer Lawrence was vacationing in New York when a talent agent spotted her walking around Union Square. She went into an agency and did a cold read for Reese’s Peanut Butter Cup commercial, and they loved her. Lawrence quickly got to work as a teen model before making her television debut on Monk in 2006.

#2 Pamela Anderson appeared on a jumbotron at a football game Pamela Anderson shot to stardom after she was “discovered” cheering on the B.C. lions football team from the stands. The image of a girl wearing a Labatt’s blue crop top caught huge attention at that time. Labatt soon hired her as a “Blue Zone girl” and then she went on to model for Playboy in 1989. After modeling in Playboy, Anderson began focusing on acting and received small parts in several TV shows. Charlize Theron had a hard time when being on the verge of running out of cash and living in a sketchy hotel room. Luckily, she was discovered when she was pleading with a bank teller and causing quite a scene while trying to cash a check. At that time, a man tried to help her. It turns out he was an agent. Theron successfully cashed her check and left the bank with Crosby’s business card as well.

#4 Johnny Depp was hired thanks to a friend Apparently, Johnny Depp wanted to be a rock star. But friend Nicholas Cage got him an audition for Nightmare on Elm Street, and Wes Craven’s teenage daughter thought he was the best choice for the part. A rep from Revlon spotted Natalie Portman when she a normal 11-year-old eating a slice of pizza. The rep suggested she pursue modeling, but the actress was interested in acting. Portman spent a few summers honing her acting chops by working in theater productions.

#6 Ellen Pompeo worked as a bartender A casting director noticed Ellen Pompeo when she was bartending in New York City. The director advised her to enter the entertainment industry. As a result, she was signed to an advertising campaign with L’Oreal. After that, she starred in small roles in some movies and rose to fame thanks to the role of Meredith Grey in “Grey’s Anatomy”.

#7 Rosario Dawson was hanging out on her front porch The director Larry Clark and writer Harmony Korine spotted Rosario Dawson when she was hanging out on the stoop of her Lower East Side apartment building. The director suggested Dawson come to a movie audition. Even with no acting experience, Dawson landed the part of Ruby in the controversial indie film Kids.

#8 Harrison Ford worked as a carpenter Before getting famous, Harrison Ford learned carpentry to make ends meet. His small gig in George Lucas’s American Graffiti (1973) couldn’t help him have a stable life. Fortunately, Lucas noted him at a movie studio when he was conducting auditions for his movie, “Star Wars” and offered Ford to play Han Solo, which became an iconic gig.

#9 Ashton Kutcher was hanging out at a bar Ashton Kutcher was studying biochemical engineering at the University of Lowa in 1996. While hanging out at a bar, he was spotted by an agent. The agent advised her to enter a state modeling competition. As a result, he won and then dropped out of university and became a professional model. Eventually, he decided to pursue acting. He began his acting career portraying Michael Kelso in the Fox sitcom That ’70s Show (1998–2006). Initially, Burt Reynolds was interested in playing football and even earned a scholarship to Florida State University. Unfortunately, he suffered a career-ending injury that made him give up his dream.

He took a shot at acting and won a scholarship to the Hype Park Playhouse in New York. After his performance in “Mister Roberts”, the actor signed a television contract and hit the silver screen in “Deliverance”.

#11 Tippi Hedren was getting out of a cab Hedren was discovered when she got out of a cab in Minneapolis. Thanks to the happy accident, she received offers for a few ads and a commercial for a diet beverage called Sego. Hedren became an actress after she was discovered by director Alfred Hitchcock while appearing in a television commercial in 1961. She gained wide recognition through two movies: “The Birds” (1963) and “Marnie” (1964).