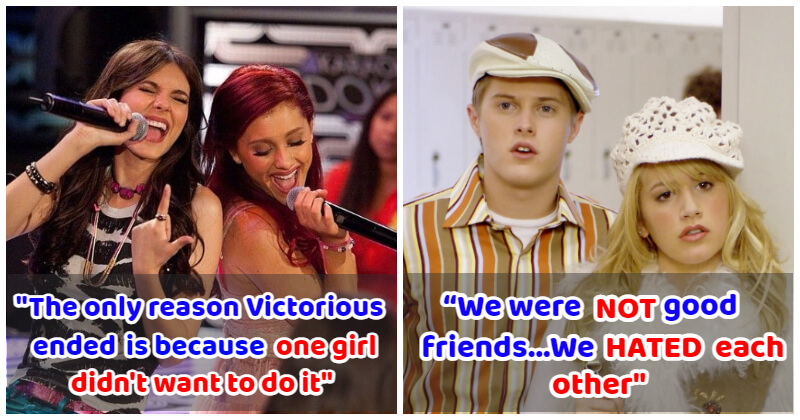 Many TV shows became successful thanks to the amazing chemistry between the characters, especially BFF duos. But this isn’t always the case in real life. We can only see what the show-writer wants us to see, not the dramas behind the scenes. Some actors who played the most iconic besties on screen actually can’t stand each other, even going as far as canceling the whole show over their quarrels. With that said, here is a list of celebrities who had a hard time coexisting when cameras weren’t rolling. One of the most infamous feuds among celebrities is the one between Victoria Justice and Ariana Grande. Rumors all around said that their friendship went downhill after the show was canceled. Victoria’s absence in the “Thank U, Next” music video, which was considered a Victorious reunion, further makes people believe in the feud.

If we turn back to when Victorious just ended, Ariana allegedly hopped on her ask.fm account to answer why the show was discontinued. She wrote to a fan: “Sweetheart the only reason Victorious ended is because one girl didn’t want to do it. She chose to do a solo tour instead of a cast tour.”

Coincidentally, Victoria was on tour in the summer of 2013. People immediately thought that Ariana was referencing her. Later, Victoria responded: “Some people would throw someone that they consider a friend under the bus just 2 make themselves look good. #StopBeingAPhony #IfTheyOnlyKnew.” If you love High School Musical, then you must know the iconic brother-sister duo Sharpay and Ryan. But despite being very close on the screen, actors Ashley and Lucas were far from friends in real life. Ashley shared in an 2017 interview that they used to hate each other.

Lucas also shared his thought on his co-star and thought she was just like her character Sharpay back then. In an interview with Billboard in 2018, Lucas revealed “I remember auditioning with Ashley and hating her because she wanted to rehearse a lot […] She gave me notes in true Sharpay fashion. I was like, ‘Who is this girl telling me how to do my own audition?’”

Luckily, Tisdale has grown out of her Sharpay phase. Nowadays both actors have become friends.

3. Will Smith and Janet Hubert: The Fresh Prince of Bel-Air Another legendary feud is the fallout between Will Smith and Janet Hubert. This feud lasted 30 years and was only resolved two years ago in 2020.

Hubert said that Smith was immature and full of himself. She claimed that the actor had wanted her off of the show as she told Insider in 2013: “He said, ‘We’re just gonna replace her and act like nothing happened.'” Smith gave his answer in a 1993 interview: “…I know she is going to dog me in the press,” before adding, “She said once, ‘I’ve been in the business for 10 years and this snotty-nosed punk comes along and gets a show.’ No matter what, to her, I’m just the Antichrist.”

Smith and Hubert reunited one-on-one as part of the televised Fresh Prince reunion in 2020, where they explained why they did what they did, forgave each other, and moved on. Everybody in the Star Trek original cast crew knows about Shatner’s legendary ego, but no one has ever hated it more than Takei has. Their beef has been festering for over five decades, which is a pretty long time. Long enough to call them enemies even.

In 1994, Takei wrote in his autobiography “To The Stars,” telling us how Shatner would pretend not to know him on set. He even went further and tried to prevent Takei’s character Sulu from taking command of a starship. Shatner also threw some subtle shade in his own autobiography. He claimed that he never really got to know Takei because Takei was barely on set (another way of saying that Takei’s part was small).

Things got tense after Shatner apparently didn’t receive an invite to Takei’s 2008 wedding. Despite his co-star’s accusations, Takei claimed that he did invite Shatner and that the invite must have gotten lost in the mail. Gossip Girl is one of the most watched shows on HBO, and there is no denying that its success came from the amazing chemistry between Blair and Serena. However, the relationship between the two in real life is far from spectacular.

When rumors said that the two stars couldn’t stand each other, Lively’s publicist did nothing to address the matter. They even commented in August 2010, “Blake and Leighton have never been and never claimed to be great friends. Blake goes on stage, completes her duties, and returns home.” According to a New York magazine exposé, Lively and Meester would “avoid each other like the plague” on set.

6. Elena And Stefan: The Vampire Diaries Nowadays Nina Dobrev and Paul Wesley are great friends. But their friendship is none existent in the first few seasons of Vampire Diaries, even though they were supposed to play as perfect friends and lovers while on the set. Their different personalities immediately clashed. Nina explained their chemistry, saying “I realize now that there’s a fine line between love and hate, and we despised each other so much that it read as love.”

They have overcome their differences and become like family though. The two actors have since joked about hating each other and still maintained a good friendship. For two amazing besties on screen, Milano and Doherty are a bad duo in real life. Milano even outright acknowledged the hatred, saying “We didn’t get along”. She further added, “There were times when I’d come in and say, ‘Good morning, Shannen,’ and she didn’t say anything to me. There were times when she’d come in and say, ‘Good morning, Alyssa,’ and I wouldn’t say anything to her.”

Doherty confirmed the tension between them in an interview, saying: “There was too much drama on the set and not enough passion for the work. You know, I’m 30 years old and I don’t have time for drama in my life anymore.” While Lorelai and Luke have become the icon for friend goals, Lauren Graham and Scott Patterson weren’t exactly best friends. Lauren said in a meeting that the two were not companions. However, she also said that the whole “beef” was just profoundly exaggerated. According to the actress, the set was happy and they weren’t hostile towards one another. She and Patterson just weren’t really close in real life.

9. The Ninth Doctor And Jack: Doctor Who The fans of the Doctor Who franchise will see Ninth Doctor and Jack’s friendship as something pretty intense and fun. If only the relationship between the actors who played them could be half as good.

Barrowman thought Eccleston was a downer. During an interview, Barrowman said, “Chris was always grumpy. You don’t always have to be intense. There comes a point when intensity makes you miserable. I think that was the case with Chris.” Sam & Cat was canceled after sensitive photos of McCurdy were leaked onto the internet in March 2014. Many people thought this was the reason why the actress skipped the Kid’s Choice Awards. However, TMZ reported that McCurdy didn’t go to the ceremony because she found out about the differences between her and Grande’s pay. Apparently, Grande was being paid a significant amount more money than she was.

All hell broke loose when McCurdy posted a long essay about letting go of a toxic friendship in 2014, which people quickly assumed was about Grande. Fortunately, both stars have moved on. McCurdy congratulated Grande on her engagement to then-fiancé Pete Davidson, and Grande tweeted “I love her forever” in response in June 2018.

11. Susan And The Other Housewives: Desperate Housewives This feud is quite well known to the public eye. Despite playing as best of friends on screen, the ladies of Wisteria Lane don’t get along with Susan in real life. The root of the problem seems to be that Teri Hatcher considered herself the star of the show, though all four of the actresses were all leads.

Nicolette Sheridan called Hatcher “the meanest woman in the world.” Longoria appeared on “Jimmy Kimmel Live!” claiming that the crew was all still “very good friends,” before correcting herself with, “99% of us are.”

12. Mulder And Scully: The X-Files Despite being a great pair on camera, The X-Files performers were always fighting off-screen. David Duchovny (Fox) and Gillian Anderson (Dana) quarreled a lot throughout the eight series. “Familiarity begets contempt,” said one of the performers, “It has little to do with the other individual. We used to get into fights about anything else. We couldn’t tolerate being in the same room.”