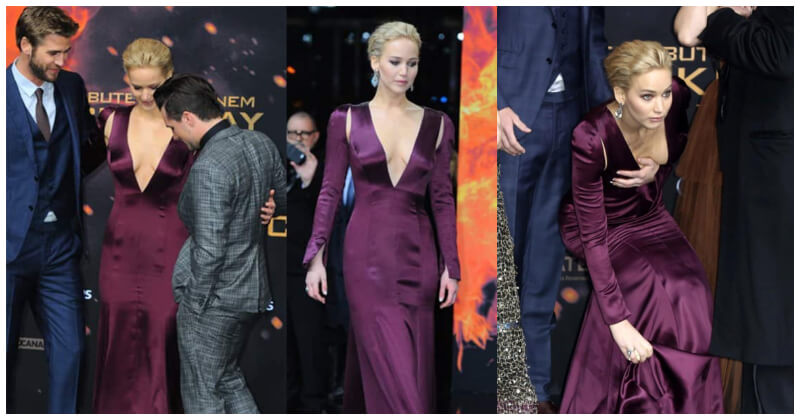 In recent years, the fashion industry has become more and more developed. Celebrities from all walks of life tastefully displayed exquisite costumes created by renowned designers at a variety of major occasions. They dressed up and walked the red carpets in gorgeous clothes. Their appearance drew a lot of attention, and all cameras were drawn to them.

Although we think of Hollywood stars as graceful and poised, their high fashion outfits sometimes turn against them at the most embarrassing moments. Unlike our fashion catastrophes, these clothing disasters were captured live on camera and have been living rent-free in our imaginations. From nip slips to slit skirts that showed more than was intended, here are some of the most jaw-dropping wardrobe malfunctions that celebrities really want to forget. Keep reading for more details! The “Good Ones” singer must have been happy that the ARIA Awards in November 2021 would not be broadcast live. Charli filmed a video from home, presenting an award to Justin Bieber and Kid La Rai for their hit “Stay.” After Charli said goodbye, the strap of her dress fell down, revealing her breast (which was censored in the video).

The native of England was taken aback and immediately laughed off the wardrobe malfunction. She rerecorded her presentation without any nip slips for the actual program, but she couldn’t help but share the humorous film a few days later on Instagram. Hailee Steinfeld looks stunning on the red carpet at the 2017 Academy Awards. She was a vision in white, shining out on the deep-hued runway in a high-neck gown by Ralph & Russo. However, she encountered a minor wardrobe malfunction when a seam in her custom Ralph & Russo gown ripped.

The tear “was getting bigger and bigger as I went down the carpet, because anytime anyone stepped on the train, it would just rip more and more. There was a point where I was awkwardly holding my hand to try and hide it as it was getting bigger.” – she shared. Ashley Tisdale drew attention to herself at the Mother’s Day premiere in Hollywood on Wednesday owing to what seemed to be a wardrobe malfunction. The 30-year-old High School Musical graduate went braless and donned breast pasties that were visible beneath her sheer black top. She later addressed the issue and named the brand of her nipple pasties on her Instagram page. Emily Ratajkowski’s Reem Acra dress separated wider than she anticipated when she walked at the Golden Globes after-party, exposing her underwear. Despite the accident, the actress quickly recovered and looked stunning. The model had a wardrobe malfunction as she stepped out in a daring gown with a variety of designs on it. She looked unconcerned about her nip slip as she entered the star-studded party, but then grasped at the top of her dress to ensure she didn’t reveal her best assets again.

As she walked out of private members club Lou Lou’s, she covered her chest with her arm and held her right arm up to avoid another wardrobe malfunction being caught on camera. Bella Hadid is emerging as one of the top earning models in the fashion industry in the world. At the same time, she is the face of many famous brands that are sought after today. Appearing on the red carpet of Cannes 2016, during the premiere of Unknown Girl, the 19-year-old model made everyone around her “hold their breath” with every step she took. With a hot style of wearing no underwear. Jennifer Lawrence had a wardrobe mishap during the Berlin premiere of “The Hunger Games: Mockingjay – Part 2”! It happened when co-star Donald Sutherland walked on her gown by mistake. Lawrence was seen with her top covered as she bent forward to try to release the dress from his shoe. The daring burgundy silk satin Dior couture gown was already a hazardous option with its plunging neckline that would undoubtedly necessitate some fashion tape. When your dress has not one, but two, pelvic-high slits, you’re going to make the same mishap Victoria Harvey did at the 68th Cannes Film Festival.The model and member of the British nobility struggled against the wind to prevent indecent exposure. Kruger looked stunning in a tiny pale blue dress with a huge sequined rose on the front while attending a photocall for Disorder Saturday. But the dress was a little too short because as she went to leap off the podium she was sitting on, she showed off her red undies! The 25-year-old Poison singer wore a silver metallic floor-length gown that showed off her cleavage, giving a busty display. The dress was backless, showing off her tattoos. Her blonde locks were down in a natural ‘do and hung about her bare shoulders as she kept the accessories to a minimum and let the dress do the talking. Guess she didn’t practice walking up steps when she tried on this sheath with see-through panels. Nicky Hilton was caught flashing photographers (unknowingly!) as she attended the Atelier Versace fashion show in Paris. Unfortunately, the Captain America: The First Avenger actress seemed to rip the lining of her dress as she posed for photos at the BAFTAs. It was all going so well until eagle-eyed observers noticed a large rip in a transparent area of her gown. However, the actress maintained her smile, with no sign of shame on her face. What a professional. Adam Levine‘s gorgeous wife also narrowly avoided a nip slip at the Vanity Fair Oscars Party, thanks to her husband’s great catch. Prinsloo did not use enough fashion tape on her backless Calvin Klein gown, exposing plenty of side boob to photographers. Wearing this lace dress without a slip beneath is one of the worst sartorial decision the pregnant reality star has made. She appeared trashy and cringe-worthy. Cara Delevingne experienced her second wardrobe mishap in less than two months while attending the international premiere of Pan at the Oden theatre in London.

The British supermodel and actress was caught stooping over a barrier to chat to admirers, causing her black, fringed little dress to ride up and catch the attention of onlookers. The actress was spotted in New York filming scenes for her film, “All We Had”, and by all reports, the former Dawson’s Creek star was experiencing one huge wardrobe malfunction. Holmes struggled to keep her hemline down throughout the day-long shoot, dressed in a far too short denim mini dress. The blonde beauty was joined by stars including Zara Holland for the glitzy London screening, but needed help from hunky Alexander Skarsgard when her gown unzipped. The singer looked stunning in a gold sequin costume, but the thin fabric provided little covering as the cameras flashed. Christina showed off her jaw-dropping physique in the figure-hugging attire, but her underwear was clearly visible as the camera flashed. Christina’s high rise jeans were on display as she wore a pair of trusty spanx to keep her curves in check.
And it wasn’t only her underwear that shone brightly beneath the spotlights. The Glee actress showed off a little more than she intended when leaving the Alexander McQueen Savage Beauty gala in London. The blond beauty was seen making her way into her ride in a Johanna Ortiz navy and black low-cut gown. Never one to shy away from skin-baring ensembles, the daring singer-songwriter bared everything at the 2016 MTV Video Music Awards in a bedazzled jumpsuit. While Ashley Tisdale was wearing nipple pasties, Halsey went braless beneath her bedazzled striped see-through ensemble. In front of the cameras at Madison Square Garden, her boobs were definitely on exhibit.
Despite the fact that she looked underwear-free, Halsey was wearing a nude thong with little covering. Lily-Rose Depp, on the red carpet at The King premiere during the BFI London Film Festival on October 3 looked so stunning in a black and white ensemble. However, Lily-Rose Depp is in a dilemma because of this shirt. The actress reacts quickly and supports elegant costumes.