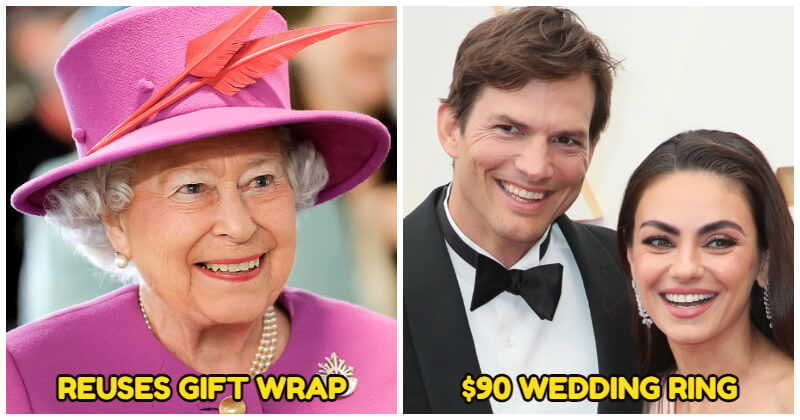 We respect how some celebrities rose to their stardom and the way they have conquered their world as diva J.Lo has been on top of billboards or Jennifer Lawrence has been nominated for Oscars for years. Certainly, fame is associated with wealth and we are stunned by the amount of money they earn. Needless to say, numerous stars are millionaires or even billionaires for real.

However, some celebrities surprisingly choose the frugal life, just like the rest of us. Instead of spending millions of dollars on mansions and cars, some just make use of coupons at supermarkets and try bargaining somewhere on Earth that you probably need a double-check, like “Really, Is that he/she?

We all agree that money should never control us or our principle. Let’s take a look at these 10 famous people below to see how they are similar to us. Scroll down and enjoy! The two-time Oscar winner Hilary Swank never ignores coupons when she sees them. She revealed, “When you open the paper and see those coupons, it’s like dollar bills staring you in the face.” And even though she’s now a Hollywood A-lister she added ’’It’s how I grew up. Why not?” Geller once said that she clips coupons to pay less money. She described, “Just because you’re successful doesn’t mean that you should be errant in your spending.”

The actress also revealed that she doesn’t “like making big purchases.” She went on saying, “I will go back and stare at a leather jacket for a couple of days before I even purchase it.” Lady Gaga shared on Twitter that she still makes use of coupons at supermarkets and always bargains before ending up a deal at retail stores. In addition, she revealed that she comes from New York and that’s why she enjoys shopping from the sale rack. The successful comedian and actress, Tiffany Haddish, is definitely against squandering her money. She once revealed that the purse she had was the knock-off version of the well-known brand. Still, in 2016, Haddish had given herself an allowance of $500 to be able to pay off her house. She explained that she was afraid of being homeless once again. Kristen Bell once said that she’s a huge fan of shopping with coupons to save some money. The 42-year-old actress even claimed that she might steal coupons from her neighbor’s mailbox sometimes. Ed Sheeran is regarded as one of the most successful and best-selling artists today. Still, the 31-year-old talented singer stated, “I really don’t spend much.” He even admitted that he let himself to spent about $1,000/month which he mainly spends on taxis. Kunis and Kutcher who got married in 2015, are considered one of the most powerful couples in Hollywood. Still, they are known for enjoying a low-key life and staying far away from the glamour and glitter which go along with fame. Kunis said that she got her wedding ring from an online site for $90 because she was horrified at how ’’astronomical’’ the prices of wedding rings at extravagant jewelry stores were. Keira once revealed that she restricts her consumption to an allowance of about $50,000/year. But it isn’t just about saving money purpose, it helps her stay grounded and connected to others. She stated, ’’I think living a [expensive] lifestyle means you can’t hang out with people who don’t live that lifestyle.” She then added that some of the best times she spent have been in the least fancy places. The famous actress Halle Berry was one of the highest-paid in the 2000s. Despite earning big bucks, she defines herself as “pretty frugal.” She described her lifestyle by saying, “I save a lot because I’m always worried about when this trip is going to stop.” Like the rest of us, Queen Elizabeth has some ordinary habits. When it comes to saving money, it was said that after Christmas, the Queen collects “the wrapping paper and ribbons and would smooth them” in order to reuse them instead of throwing them away.