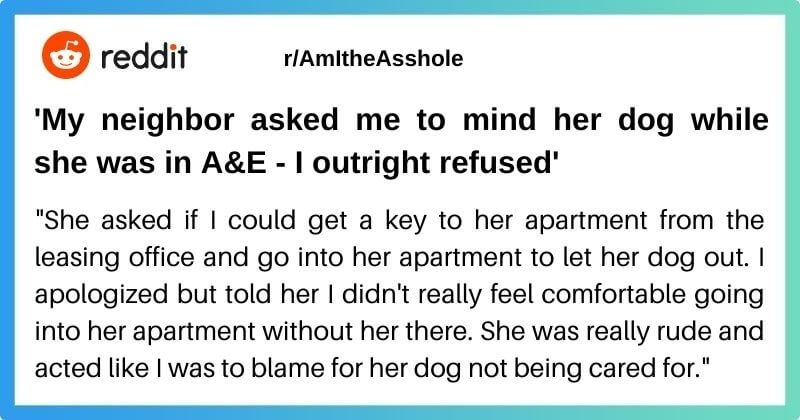 Pets are brilliant companions, but at the same time, they also are a great responsibility to the owners. Though pet parents always want to take care of their furry babies, they cannot be with them all the time. If pet owners are busy with work or go on a vacation, they could entrust their babies to pet sitters. However, when they unexpectedly end up at the hospital, their animals have to rely on their family, friends, and neighbors. Lately, a Reddit user shared on the internet the conflict with her neighbor over a dog and caused a stir among netizens. Speaking to Reddit, the woman admitted she wasn’t an outgoing person, while her neighbor seemed to be an extrovert. As both of them had a dog, the neighbor approached the poster when they walked their pets. They also exchanged phone numbers to contact each other if necessary. The Redditor wasn’t into gossiping, but she felt okay as she hadn’t received any texts from her neighbor.

“I’m a bit of an introvert and I have a very extroverted neighbour who is a bit of a pain. Every time she sees me outside with my dog she just has to walk up with her dog so they can ‘say hi’ and she can gossip about another neighbour. She asked for my number a few months ago so she could text me in case she saw anything sketchy happening around our apartment complex at night. I thought this seemed okay, and she hasn’t text me since then – until today,” the Redditor wrote. One day, when the poster was attending a meeting for work from home, she received two calls from the neighbor. She didn’t answer, so the woman texted her to ask if she was at home. It turned out that the neighbor was in the emergency room at the hospital, and she hoped the Redditor could do her a favor.

“She knows I work from home and she called me twice while I was working. I didn’t answer, so she texted asking if I was home. I told her I was in a Zoom meeting for work, but that I was home. She then told me she was in the ER and asked me to call her. Reluctantly, I did.” The neighbor wanted the poster to enter her flat and let her dog out as she had rushed to the ER and left the dog alone at home. However, the Reddit user refused the request since she wasn’t willing to leave her meeting. Furthermore, as a former property manager, she tried to avoid problems that could emerge when entering a house without its owner.

“She asked if I could get a key to her apartment from the leasing office and go into her apartment to let her dog out. I really don’t feel comfortable with this. Not only am I working, but I used to be a property manager and I know the type of issues that could arise from entering someone’s home without them present,” the poster stated. After being refused, the neighbor was pissed and blew up on the writer: “I apologised but told her I didn’t really feel comfortable going into her apartment without her there. She was really rude and acted like I was to blame for her dog not being cared for.” While most agreed that the poster had the right to refuse what she didn’t want to do, opinion was divided in terms of the neighbor’s attitude. Some disapproved of her impolite manner after she didn’t get what she wanted.

One user said: “I mean she was rude and tried to guilt the woman into caring for her dog – that’s an a***hole move.” Others spoke up for the neighbor as it was understandable to be crossed when she worried about her dog.

Another user shared: “She is rude but honestly if I were in ER and was scared for my abandoned pet I might be a little pushy and desperate too. The woman isn’t required to do anything but I really do feel for the neighbour in this scenario.”

A third user commented: “To be fair, someone in an ER could be given a little slack on that. The woman is still not the a***hole but she might’ve been pretty desperate. Thinking about your dog when you’re in the ER makes her OK in my book.” Who do you think is the one at fault? What would you do if you were in the poster’s position? Have you ever gone through a similar circumstance? Please share your views and experience with us in the comment below!

This Cats Owner Comes Home After a Long Separation… You Won’t Believe How the Excited Cat Reacts!

Mom Refuses To Get Rid Of Her Dogs Even Though Her Husband’s Affair Kid Is Allergic, Reddit Has Got Her Back

Despite Its Fierce Appearance, The Snow Leopard Is The Shyest One Among All The Big Cats