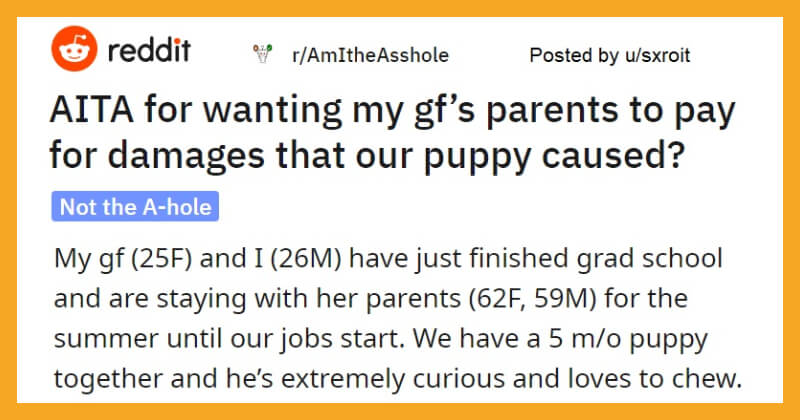 Generally, grandparents tend to indulge their grandkids, which may lead to some troubles for the parents. While the grandparents’ affection and kindness are appreciated, spoiling the kids too much could cause grave consequences that the parents have to take responsibility for. Unfortunately, the same rules apply to puppies and drive many to the end of their rope. An owner of a 5-month-old dog turned to Reddit for advice to help him handle his dilemma. Posting on the account u/sxroit, the guy shared that he and his girlfriend were living at the girlfriend’s house with her parents during the summer. The couple raised a naughty puppy that was kept in the sunroom to minimize the damage it might cause. The dog was not allowed to enter the upstairs area, and all family members were aware of that.

One day, an unexpected event happened when the girlfriend’s father was at home alone with the dog for 2 hours. The dog was in crate training, so the couple asked the father to keep an eye on it from time to time and not let it out of the sunroom.

However, the pet parents freaked out after returning home and seeing an empty sunroom. They asked the father and learned that he had freed the dog and let it roam around the house. Eventually, the couple found their baby upstairs with a mess of clothes and shoes. Moreover, the dog seemed to dig in a trash bin and eat some strange stuff. The girlfriend’s mother showed no sympathy for the couple. She stated that it was their fault to place their items all over the house so the pup could reach them. On the other hand, her daughter blamed the father for letting the pet out and not paying attention to it. Therefore, the couple believed the girlfriend’s parents should be responsible for the vet bills and damaged stuff. The mother disapproved of the idea since she thought the couple should be accountable for their carelessness. Besides, she had helped them financially for eight weeks of the summer, so they should feel grateful instead of demanding more.

The post has evoked an intense discussion among netizens. While most sided with the couple and agreed that the father was in the wrong, others believed it was unreasonable to expect other people to care for their pet.

Many commenters criticized the father for neglecting the couple’s instructions about the pup. Nonetheless, the public suggested the Redditor withdraw from this situation and let his girlfriend talk to her parents.

By contrast, some insisted the dog was the couple’s responsibility. The father wasn’t their pet sitter, so they didn’t have the right to demand compensation from him. Reddit users also claimed the poster was a terrible dog owner when leaving a 5-month-old pup in the crate instead of training it properly.

Luckily, this story had a happy ending with a plausible solution. After the girlfriend discussed it with her parents, her dad admitted his fault and volunteered to pay for the vet bill and medicines. It turned out that he opened the crate for the dog’s sake, but he failed to watch it as he had planned. The conflict was finally over, and the pup was in his best condition at the moment.

What do you think about this thread? Who do you think is the one at fault? Have you ever been in a similar situation? Please share your views with us in the comment below!

Corgi Was About To Be Put Down Because Of Two Noses And One Eye, But Man Stepped In To Make Her Unique Dog

People Open Shoebox And Discover A Tiny Kitten Abandoned Inside

6 Cutest Small Pet Mammals That You Might Want One Now

Being Distressed By Cute Puppies Means Something Wrong With Heart And Mind? Reddit Replied The Overly Blinded Dog People

Poor Pregnant Cat Cried Out To People To Help Feed Her. Then An Angel Listens To Her