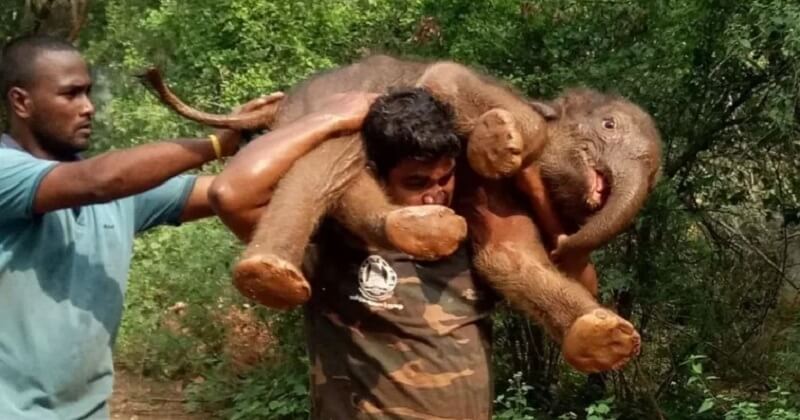 Somebody said kindness could be heard by the deaf and seen by the blinded. We believe kindness also can reach every living being’s heart and soul. Plus, it can give people the strength and courage they need to overcome obstacles. That explains why a man was capable of moving an elephant calf out of danger on his own. That young man became a hero, about whom we would love to tell. Let’s not skip any part of his touching story! Palanichamy Sarathkumar was a twenty-eight-year-old guardian of a forest team stationed near Mettupalayam in Tamil Nadu. On December 12th, 2017, he received a call reporting a female elephant blocking a road. Immediately, he and his colleagues lured the elephant away by using firecrackers. Then, they searched the area to check whether there were no more elephants, which is when they found the calf stuck in a ditch.

The giant baby was so petrified and tired that they had to quickly rescue him by moving the huge blocking boulder and lifting him out of the mud. But the calf was too weak to walk, and his mother was nowhere to be found. Henceforth, the forest guards decided to carry him to the other side of the road to reunite with his group. However, they were afraid that the mom elephant would probably turn back and attack them. Therefore, they couldn’t gather to move the calf but had to follow Sarathkumar’s idea. They put the more-than-a-hundred-kilogram creature on his shoulder. Then, with another partner’s help to stabilize the calf, he brought him crossing the fifty-meter distance and put him down near a watering hole. Afterward, they waited for the elephants’ reunion. Yet, no animals appeared, perhaps because of humans’ being there. They came home and returned to the water hole the next day. The calf was no longer there. In addition, they found enormous footprints on the ground, which made them believe the baby elephant had met up with his family and come home.
Two years later, Ms. Dipika Bajpai – an Indian Forest Services officer, shared a flashback photo of Sarathkumar carrying the baby elephant that weighed more than him (who was about eighty kilograms at that time). The picture created a buzz on social media. Twitter users hatted off to the brave man with tons of praise. They claimed that only a courageous heart filled with passion and kindness could set off such a magnanimous action.

We are so thankful to the guardians around the world who have always been supervising and saving the wildlife and wish them the best. Also, we would like to listen to your thoughts on this phenomenal rescue. Please leave your comment in the zone below after hitting the like-share button! Finally, don’t forget to follow us to meet again in the upcoming pieces!

Internet Shares That Too Compliant Dogs May Cause Many Troubles

Loving-Hearted Dog Fosters Baby Kittens He Found In A Box, We Need To Thank This Boy!