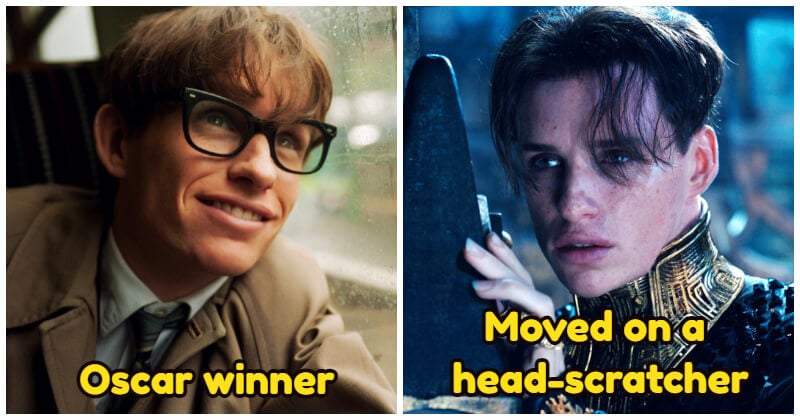 It goes without saying that the Academy Awards are the dream of every actor. An Oscar winner has certainly won all the attention in the movie world, and that person’s name will be sought after for the next billion-dollar film project. To imagine how big an Oscar winner’s impact is, we have to mention that an Oscar nomination is even considered a success for an actor. Indeed, being nominated for an Oscar is successful enough to be offered a great movie role.

However, even an Oscar cannot guarantee long-term success for award-winning actors. We all agree that acting is one of the most competitive careers in the world, actors must maintain their form before their position is taken by another actor. In fact, it doesn’t take too long for a successful career to go downhill. Someone might think about several years when so many prominent actors start to conquer the cinema world. But, amazingly, some actors whose performances in the next movie immediately received terrible reviews.

Below are some actors whose next movie after winning an Oscar was awful. Keep scrolling down and check them out! Rami Malek rose to his stardom as the protagonist in “Mr. Robot” and triumphed at the Oscar over some prominent names such as Christian Bale and Bradley Cooper. But Malek’s next role of Chee Chee the gorilla in 2020’s forgettable “Dolittle” certainly let the audience down. The movie was excoriated by critics, who focused mostly on the weird leading turn from Robert Downey Jr., and the horrible script, but also remained unimpressed by the all-star animal voice cast. In 2014, Eddie Redmayne won an Oscar for portraying cherished scientific icon Stephen Hawking, winning raves in the biopic “The Theory of Everything. Redmayne truly made us reach for tissues and was a straightforward favorite for a golden statue.

Unfortunately, his next role was a total left turn into the Wachowski sisters’ bad-acid-trip “Jupiter Ascending.” The actor portrayed the arrogant bad guy and this movie was praised for its world-building but it was met with extreme indifference and confusion from critics, stalling immediately at the box office upon release. Its singularly WTF-inducing vibe, like “Dune” combined with a teen drama on The CW, might give it iconic status someday, but as an Oscar follow-up for Redmayne, it was a head-scratcher. Helen Hunt, who was known for the sitcom “Mad About You,” took a starring role in 1997’s “As Good As It Gets” and went toe-to-toe with the legendary Jack Nicholson. Thanks to her performance in that flick, she won an Oscar for Best Actress.
After that, she came back to the silver screen in “Dr. T and the Women” and it was a flop. “Dr. T and the Women” is one of few films to get a straight-up “F” from audience pollster CinemaScore (per Vulture), and it couldn’t recoup its meager budget at the box office. Jared Leto is the Best Supporting Actor winner in 2013 for “Dallas Buyers Club,” converting himself by losing 30 pounds to portray a transgender woman dealing with HIV.

His next movie project was a step back in 2016’s “Suicide Squad,” not to be confused with the subsequent (and much better) “The Suicide Squad” in 2021. DC’s first flick about the squad of anti-heroes was drubbed critically despite creating a fair amount of money, and generally, Leto failed to bring the high bar set by his predecessors Jack Nicholson to life, and the late Heath Ledger in playing iconic Batman villain The Joker. It didn’t help that “Suicide Squad” was poorly written and choppily edited together after requiring multiple shoots. Jennifer Lawrence rose to her stardom impossibly fast. Lawrence starred in X-Men flicks and headlining “The Hunger Games” franchise, and she won Best Actress for “Silver Linings Playbook.” Her success at age 22, meant she could pick whatever project she liked moving forward.

However, a horror film that she appeared in the fall of 2010, months before her “Winter’s Bone” Oscar nomination would put her on the map, had been postponed by the studio for a bit, and they saw fit to premiere “House at the End of the Street” several years later after Lawrence’s Oscar win to maximize the box office potential of what became a roundly awful movie. Critics loathed it, finding it to be primarily devoid of actual scares and its plot mainly understandable. Sandra Bullock won an Oscar in 2010 thanks to his role in “The Blind Side”. There were some critics but the audiences all agreed that Bullock’s portrayal as a fierce and protective southern matriarch was the unquestionable highlight. Still, her next role would be in 2011’s “Extremely Loud & Incredibly Close,” a movie that doubled down on perhaps the touchiest “based on a true story” material possible in contemporary America: the events of 9/11. An adaptation of a Jonathan Safran Foer novel, the movie polarized critics right down the middle and was the opposite of a “Blind Side”-like grower at the box office, disappearing immediately. 5 years after winning the Best Actress Oscar for “Boys Don’t Cry” in 1999 in a star-making portrayal, Hilary Swank entered the elite ranks of actors with numerous Oscars for leading roles with another victory for “Million Dollar Baby” in 2004. One of the most brilliant and successful films in director-writer-star Clint Eastwood’s long career, “Million Dollar Baby” impressed critics on its way to winning Best Picture, Best Director, and Best Supporting Actor (for the ever-reliable Morgan Freeman) in addition to Swank’s statue.

But the Swank’s next role was a disappointment that started a downhill of her entire career in the following years. Brian De Palma invited her to cast as a femme fatale in a high-profile adaptation of James Ellroy’s novel “The Black Dahlia,” which was doomed to draw unflattering comparisons to the seminal Ellroy adaptation “L.A. Confidential” from the beginning. The audiences despised “The Black Dahlia” to the tune of a cringeworthy “D+” grade from CinemaScore. Jammie Foxx had the rare honor at the 77th Academy Awards when being nominated for two different acting Oscars in two different categories: Best Supporting Actor for “Collateral,” which he lost to Morgan Freeman (“Million Dollar Baby”); and Best Actor for “Ray,” which he effortlessly won Don Cheadle (“Hotel Rwanda”) and Leonardo DiCaprio (“The Aviator”).

His bright and shining new star power wouldn’t help his next feature, 2005’s “Stealth.” A forgettable, critically-panned fume bomb that lazily mashed up “2001: A Space Odyssey” and “Top Gun,” “Stealth” starred Foxx alongside Josh Lucas and Jessica Biel as human pilots facing a rogue AI drone. “Stealth” would hardly recoup half of its $135 million budget, and quickly turned into another failed blockbuster on the ash heap of history, where Jamie Foxx prefers it to stay. Among so many actors and actresses who have portrayed notable roles in Quentin Tarantino’s movies, only one of them has won Oscar gold: Christoph Waltz for his Best Supporting Actor for 2009’s “Inglorious Basterds” and again only 3 years later for “Django Unchained.”

However, Waltz decided to portray another villain in the colossal flop “The Green Hornet” in 2011. Although the actor did his best in an underwritten role as a paranoid gangster, he failed to create a bad guy as impressive as Hans Landa soon after winning an Oscar award. Natalie Portman’s Oscar-winning portrayal in “Black Swan” was a showcase role for her, and remains the successful career that’s taken her from child prodigy to “Star Wars,” and back around to A-list status and the Marvel Cinematic Universe.

And while “No Strings Attached” wasn’t so horrible, receiving reviews that largely betrayed dissatisfaction in the star-power involved, the two romantic comedies with highly similar premises will be recognized as a missed opportunity: why not just have Mila Kunis and Ashton Kutcher star in one flick, and combine forces? Perhaps Natalie Portman would have paired better with “Friends With Benefits” co-star Justin Timberlake. Charlize Theron’s Best Actress victory in 2003 for “Monster” is one of the most textbook examples, as Theron’s all-out commitment won her the Oscar in future films like “Mad Max: Fury Road” and “Atomic Blonde.”

Soon after, Theron delivered a letdown in the form of the cliché-ridden and critically-loathed “Head in the Clouds” in 2004. In many ways the polar opposite of “Monster,” the film was a gauzy historical drama against the backdrop of World War II that followed a very attractive love triangle (or love triad, perhaps) among Theron and the equally glamorous Stuart Townsend and Penelope Cruz. Treacly, flat, and forgettable, “Head in the Clouds” was a forgettable misfire from Charlize Theron that was unfortunately timed just after her crowning Oscar glory. Gary Oldman’s Best Actor for 2017’s “Darkest Hour” was his second Oscar, so he might not pleased with all he got. He pursued a more successful stage in his career. But his move soon later was his nightmare.

After portraying one of history’s most outstanding figures in Winston Churchill to the Oscar podium, hardly anyone was interested in seeing Oldman play just some general in another dime-a-dozen war film. If they were, they’d have numerous superior choices like “Air Force One” or “Tinker, Tailor, Solider, Spy” from Oldman’s filmography to choose from.

16 Celebrities Who Look Unrecognizable Without Their Iconic Hairstyles