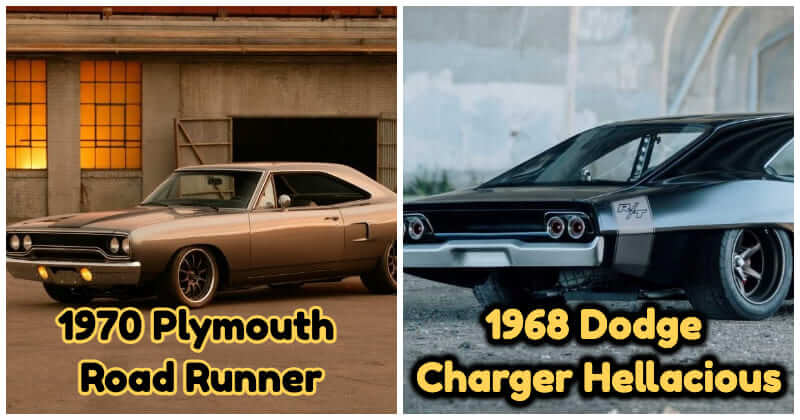 Early in the franchise, Dom’s love of muscle vehicles became clear. Dom liked horsepower-powered versions for street races. Dom’s father, another automobile lover, influenced his love for imports, and Dom argued with Brian O’Conner about it.

What is the black car Dom drove in the first Fast and Furious movies? Dom’s favorite car in The Fast Saga is the black 1970 Dodge Charger R/T. Dom and his father built it, and it appeared in The Fast and the Furious, Fast & Furious, Fast Five, and Furious 7, where Dom and Deckard Shaw destroyed it. Based on how the 1970 Dodge Charger R/T looks at the hideout in F9, it seems like Dom fixed the car after Furious 7.

The Fast and the Furious ends with Dom driving a red Chevelle in Baja, Mexico, to get away from Los Angeles. In Fast & Furious, the car came back when Dom drove home to go to Letty’s funeral. Dom later sanded the car, painted it gray, and blew it up as a way to get revenge for what he thought was Letty’s death. Dom’s Road Runner was first seen at the end of The Fast and the Furious: Tokyo Drift when he ran into Sean at the race. He said that he got the car from Han, which brought them back to Furious 7 when Dom went to Tokyo to get Han’s things after thinking he was dead. When Dom returned to Los Angeles in the movie, he used a different Road Runner. Dom bought the Challenger in Spain, and at the end of Fast Five, they celebrated their successful heist by racing Brian. In the next movie, Fast & Furious 6, Dom and Brian raced the same two cars they had used in the previous movies. In The Fast Saga, nobody knows what will happen to the car.

Dom first used the 1968 Dodge Charger Hellacious in F9 when the group went to Edinburgh to find Jakob Toretto and stop him from using the Project Ares device. The car was then used in the Tbilisi convoy scene when magnets were used to bring down the armored car. The Charger was then given to Jakob Toretto, who tried to give it back to Dom when he and his brother tried to make up.

Apart from All Dominic Toretto cars, we also want to show you information about the cars of Deckard Shaw in Hobb & Shaw.

As Shaw navigates London’s busy streets with his sister Hattie (Vanessa Kirby) and Hobbs, the McLaren 720S’s performance is on full display. The sports car’s world-class control and skill help our heroes elude Brixton and his thugs. The car can go from 0 to 60 mph in 2.7 seconds and reach 212 mph, and its stopping power allows the crew to stop, reverse direction, and speed off quickly.

Despite McLaren’s top-tier performance in Hobbs and Shaw and Shaw’s excellent handling of the 720S, the three protagonists are crowded into the two-seat cabin. Only 76.0 inches wide and sporting an extremely small passenger space of 47 cubic feet, it’s a mystery how Statham, Kirby, and especially Johnson (6’5″, 260 pounds) fit in the McLaren.

David Leitch verified to Cinema Blend that the trio fit in the sports car during production. Leitch said he wanted to play up Dwayne Johnson’s gigantic proportions compared to the McLaren but deleted the gags because they didn’t fit the scene’s atmosphere.

If you found this article related to Dominic Toretto Car interesting, visit our website Aubtu.biz to get access more news and information about not only “Fast & Serious” but also other famous movies.