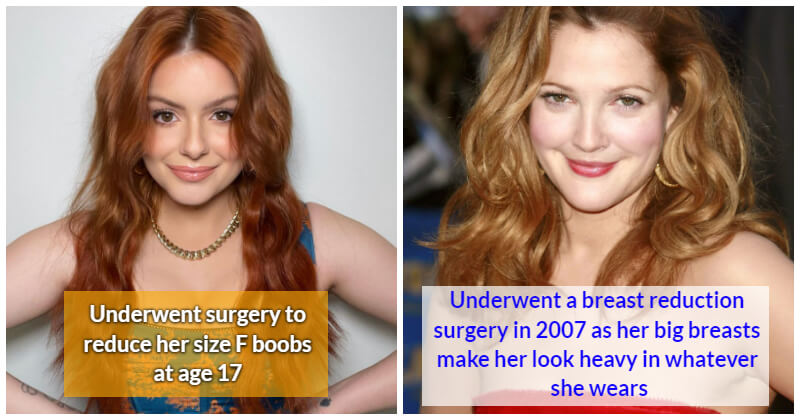 There is no right or wrong in going under the knife. It’s a personal choice to improve the look of body parts. This brings them more confidence and opens up more opportunities in their careers. Both men and women do plastic surgeries. Both ordinary people and celebrities have cosmetic surgeries. And, celebrities, whose every move is in public eyes are the subject of judging and scrutinizing. They go under the knife for the sake of their attractiveness, but many people consider it a public issue, freely commenting on it.

For this thing, many celebrities don’t speak up about their transformations. However, many are open about it. They don’t regret their decision and are satisfied with their body changes.

In this post, we’re introducing 20 celebrities who are proud of their breast implants and openly talk about their process. This change makes them look sexier and more gorgeous in all kinds of outfits. Scroll down to see who they are! “I remember being in my sister’s wedding and being so flat and thinking, ‘I just wish I would grow boobs!’ and then overnight I did. But then they kept growing and growing and growing and it didn’t seem like they were going to stop,” she said. “I was 15 years old with [size] F [breasts]. It’s like, ‘How do you navigate that?'” She spoke to Glamour magazine. Drew Barrymore underwent a breast reduction surgery in 2007. She had her explanation of her relationship with her breasts. Men look at them so much. As they’re huge, she becomes very self-conscious and she looks heavy in whatever she wears. It’s uncomfortable. At age 15, Soleil Moon Frye famously had a breast reduction surgery, taking her 38DD bust down to 36Cs. The “Punky Brewster” star used to be the victim of taunting and teasing due to her gigantomastia, literal “giant breasts.” Rapper and Oscar-nominee Queen Latifah Due suffered from back pain and difficulty exercising due to her extra breast size. She decided to reduce her breasts from F cups to a DDs.

“I was pretty big. Now I’m like a DD. I wanted to be a triple. They took one D too many! So that was hard to deal with. …I missed my old look.” She said: “I had four babies and four C-sections, and my stomach looked like the map of the world. My breasts were hanging down to here from breast-feeding those babies, and my nipples were like platters. I wanted to fit into the gowns that I finally got to wear. I had a breast reduction and a tummy-tuck, and I feel fine about that, and I feel fine about saying I did it.” Former reality TV star Heidi Montag underwent 10 plastic surgery procedures, including her second breast augmentation. In 2013, she announced that removed her size F breast implants because they were too heavy for her frame. Comedian Janeane Garofalo underwent breast reduction surgery in her 20s. The reason is that she felt heavy, and uncomfortable with an extra-sized chest on her small frame. “I had boobs like Dolly Parton…As soon as I was in college I was like, ‘these have to go.'” she explained. Marie Osmond underwent a breast reduction in her 20s as her big chest caused her back pain and difficulty fitting into clothing. Although Model Katie Price had a breast reduction in 2008, her breasts were still too big for the model. “They hang too low when I’m standing up…I’ve also got indents so you can see where the implant is sitting.” “The Millionaire Matchmaker” star Patti Stanger has taken several breast reduction surgeries so far. “I had my first breast reduction and lift five years ago, then I had another one. I felt skinny and young again!” Real Housewives of New Jersey star Dina Manzo star has undergone two breast reductions, one in 2000 and one in 2010. Legendary comedian Phyllis Diller had a breast reduction surgery in 1974. “The View” host Star Jones had a gastric bypass surgery around the time of her 2003. She also did a breast reduction.