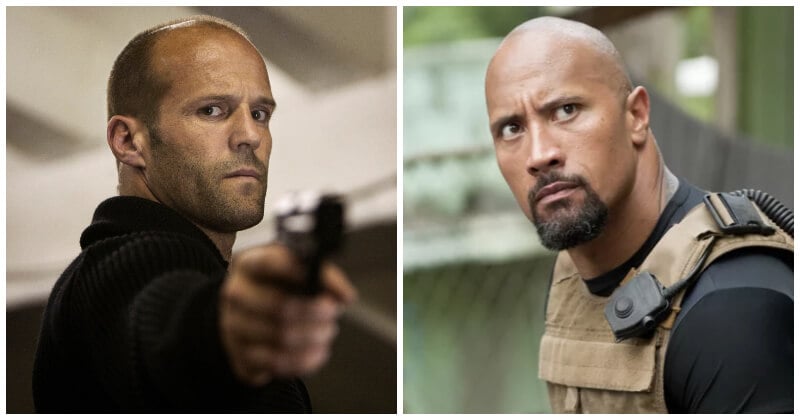 Some people still think baldness is a bad thing, but that doesn’t mean bald men will lose their good looks. In fact, almost women advise bald men to be more confident in themselves and many women find bald men attractive.

When it comes to celebrities, some sexy bald actors don’t need hair to look hot, stylish, and cool. These attractive bald guys who have starred as the leading man in almost every movie have become some of the most successful actors in Hollywood. One of the reasons why they’re so well suited for the leading role is that men are often perceived as being dominant, more masculine, and stronger than other actors with a full head of hair. From Vin Diesel to Jason Statham, no one can deny their charming beauty and gifted talent that have made their acting careers flourish over the years.

Today, we have compiled a list of the 12 best bald actors of all time. Scroll down and check them out! Jason Statham is known for his roles in movie series, such as the famous Transporter series, and the Fast and Furious series. His credit is always enough to guarantee success at the box office. Now, his movies have made over $3 billion at the box office, making him one of the most famous stars in the cinema world. “The Rock” Dwayne Johnson had a successful career in the WWE before hitting the big time in the movie industry with his roles in “G.I Joe: Retaliation” (2013), “Hercules” (2014), the comedy “Jumanji: Welcome to the Jungle” (2017), and “Central Intelligence” (2016), and the Fast and Furious series. Being a bankable star, his movies still make a lot of money. Sir Patrick Stewart is no doubt one of the most talented bald actors ever. Star Trek fans remember him for his role as Captain Jean-Luc Picard in Star Trek: Next Generation TV series (1987-1994). But he’s most known for playing the X-Men comic book character Charles Xavier aka Professor X in the X-Men movies. Anupam Kher, who is one of the most versatile actors working in Indian cinema, has a big acting career of more than 500 films in different languages. He is best known for his roles in Hindi cinema like ‘Vijay’ (1988), ‘Dilwale Dulhania Le Jayenge’ (1995), ‘A Wednesday!’ (2007) and ‘Khosla ka Ghosla’ (2007). Kher has not shied from performing in the international film industry also in movies like Gurinder Chadha’s “Bend It Like Beckham” (2002), David O Russel’s Oscar-winning “Silver Linings Playbook”, and recently in the Hollywood film “The Big Sick” (2017). Indeed, Kher’s contribution to the cinema cannot be undermined. Samuel L Jackson portrays all sorts of roles, whether a protagonist or an antagonist. He’s featured in a wide range of action films like “Die Hard with a Vengeance” (1995), “Snakes On a Plane” (2006), and “Kingsman: The Secret Service” (2015). He’s starred in many big blockbusters like portraying Nick Fury in the Marvel Cinematic Universe and also featured in the Star Wars prequel trilogy. Jackson is best known for the role of the antagonist in films like “Unbreakable” (2000) and “Django Unchained” (2012). He’s also one of the best actors working today.

J.K. Simmons is known for a lot of supporting roles in movies of different genres. Comic-book fans will agree that his portrayal in Sam Raimi’s Spider-Man Trilogy (2002-07) is the best in a superhero movie ever. However, it was his performance in “Whiplash” (2014) which made headlines all over the cinema world for his groundbreaking portrayal. It also brought him an Oscar, a Golden Globe, and A BAFTA. Stanley Tucci, who has worked in the movie industry for a long time, is considered one of the most underrated actors working today. His memorable supporting roles in movies like the political thriller “The Pelican Brief,” portrayed a very annoying customs director at an Airport in “The Terminal” (2004), and a military scientist in “Captain America: The First Avenger” (2011), and as a Master of Ceremonies in the Hunger Games movies (2012-2015). His best portrayal in “The Lovely Bones” (2009) brought him an Oscar nomination. Alan Arkin’s career spans over six long decades. He is one of the most respected actors on the stage and on the screen. He made his debut in the movie “The Russians Are Coming, the Russians are coming” (1966) for which he was nominated for an Academy Award. Since then, Arkin has appeared in lead and supporting roles in movies like “The Heart is a Lonely Hunter” (1968), “Simon” (1980), and his most known recent work is Ben Affleck‘s Oscar-winning film “Argo” (2012). He finally won an Oscar for his portrayal in the comedy-drama road film “Little Miss Sunshine” (2003). Undoubtedly the most versatile bald actor on the list, Sir Ben Kingsley has starred in films that have not only made millions at the box office but also chosen a lot of independent projects for which his acting earned a lot of critical acclaims. With a career spanning more than 50 years, the legendary British actor has won an Oscar, two Golden Globes, a BAFTA, a Screen Actors Guild Award, and even a Grammy. His most memorable roles include “Sexy Beast” (2000), “House of Sand and Fog” (2003), “Hugo” (2011), “Ender’s Game” (2013), “Schindler’s List” (1993), and the Richard Attenborough-directed “Gandhi” (1982) for which he won an Oscar for portraying Mahatma Gandhi. Robert Duvall is truly a living legend. He’s been nominated for seven Academy Awards (winning one for his performance in “Tender Mercies” (1983), seven Golden Globe Awards (winning four of them) and has multiple nominations for Emmy Awards, BAFTA, and a Screen Actors Guild Award and winning one of each of them. Throughout his successful career, Duvall is best known for his supporting roles which include The first two Godfather movies, “Network” (1976),  “The Judge” (2014), and his brilliant role in “To Kill a Mockingbird” (1962). But of course, who can forget the most famous quote in Francis Ford Coppola‘s “Apocalypse Now” (1979) portraying Lieutenant Bill Kilgore “I love the smell of napalm in the morning”.