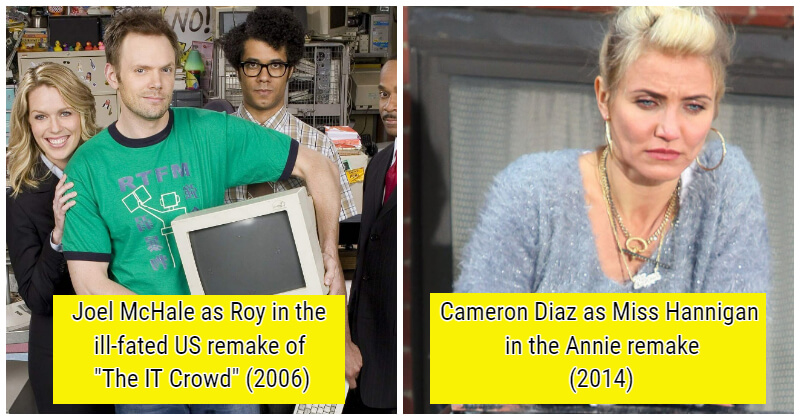 The cast, without a doubt, contributes greatly to the success of a movie. Many people watch a new movie just because it stars their favorite actor or actress. However, it doesn’t mean the main cast nails their characters. There are times people find an actor or actress completely 100% wrong for the role. These actors (actresses) can’t convince the age, appearance, or even nationality difference. As a result, they can’t bring the character to life in the way the audience expected.

Some of the most popular miscast actors and actresses? Jafar in the new “Aladdin”, Joel McHale as Roy in the ill-fated US remake of “The IT Crowd”, and Ferdia Shaw as Artemis Fowl in “Artemis Fowl”. Ferdia Shaw conveys none of the intelligence, shrewdness, or relentless determination of the book character. He comes across as a child dressed up in a suit and handed cue cards with smart-sounding lines to read unconvincingly.

Could we lay the blame for that one on the casting director? Which actors and actresses failed to play their roles? A Reddit user raised this question on r/AskReddit and ended up receiving hundreds of answers. Scroll down and check them out! Ferdia Shaw as Artemis Fowl. He conveys none of the intelligence, shrewdness or relentless determination of the book character. He comes across as a child dressed up in a suit and handed cue cards with smart-sounding lines to read unconvincingly. He’s a child so I’m going to lay the blame for that one on the casting director. – Alyverse We want a scruffy and misanthropic IT nerd, so let’s get an actor known foorrr… charisma and confidence? OK. – lucklater He is way to hammy, and not very threatening for a vampire who is behind loads of mysterious deaths in the hospital. He clearly only got the part because he wrote the darn script for it. It was also a very racist filming process where multiple times Chris Turk was told to “act blacker”. In good conscience I can’t support the film. – this_is_poorly_done

#4 Jafar in the new Aladdin He wasn’t believable or menacing and way too young. Plus for much of his screen time he’s standing next to Navid Neghaban, who would have been a MUCH better choice. – Larrik The movie is based on the book, probably Truman Capote had a reason for Mr Yunioshi being Japanese. I think probably if they’d cast an actual Japanese person the character would have been much more palatable – his role as aggrieved neighbour constantly annoyed by Holly’s parties and late nights is legit enough. It’s just the incredibly racist execution of that role. – anumati

#6 Kevin Hart as Roland in “Borderlands” Kevin Hart as Roland? Jesus fucking christ, Roland is the straight guy of the team, he doesn’t make jokes. That is what makes the interaction between him and Lilth so funny. – Destiny_player6 I like her as an actress, but I just couldn’t get into it. I felt like she struggled with hiding her accent. – mmacaluso915

#8 Mark Whalberg as Sully in “Uncharted” Wahlberg looks like he’s infiltrated human society and is pretending to inwardly agree with our conversation. – -_-o_o It’s the only time I’ve really be pulled out of a move because the casting didn’t seem right. – akchemy She can’t move her face anymore. And I like Nicole Kidman, she’s done some great stuff lately but this doesn’t make sense.- theorgangrindr

#11 Jamie Dornan and Dakota Johnson in the 50 Shades trilogy Aside from the movies being absolutely shitty, the two had no chemistry with each other and it was awkward as hell to watch. More so when I found out that Jamie was married while filming those movies. The movies shouldn’t have even been made. – LennonMcCartney65 That move is pretty awesome except for him, it felt entirely miscast and I couldn’t believe this guy was the kind of character they were making him out to be. – Nonsenseinabag

John Wayne as Genghis Khan in “The Conquerer” might be the worst casting in world history. He doesn’t even try to hide his accent. You keep expecting him to say “partner” every 15 seconds. – Ask/Reddit Dr. Christmas Jones – and no jokes. The whole point is for Venom to be more intimidating than Spider-Man. It’s like an entire point was missed. – mightbeBOND

#16 Johnny Depp as Grindelwald in the Fantastic Beasts sequels Not because of the whole situation around it, but after reading the books and the cameos in Potter, I just don’t see him as Grindelwald, just as albino Depp. –-itra Cameron Diaz opposite Daniel Day-Lewis and Leonardo DiCaprio in a period drama. What on earth were they thinking? – Stringr55 I was just thinking this the other day. Indy abandons Shortround in an orphanage sometime after Temple of Doom ‘for his own good’. Shortround grows up resenting Indy and longing for adventure. Hearing Indy’s hung up whip, he decides to adopt his persona and leverage Indy’s name to make his fortune. Indy gets wind someone is going around impersonating him and comes out of retirement. Obviously ends with Shortround and Indy teaming up and Indy giving his former protege his blessing to carry on his name (the kid having never known his own birth name). Cue new trilogy. – grim_fandjango All depictions of him are of a tall, bald, and lean businessman

No disrespect for the actor, I’d take such a high paying job too, but whoever thought of casting him is a clown. – Iperovic That stood out to me too. Stewart has kind of a brooding aura of some sort. I get why she was cast in Twilight, but Snow White is someone who is the complete opposite of that. I don’t think it’s just my bias due to her starting out in Twilight either. I imagine they put her in the role because the target audience for the film is the Twilight demographic, but it seeing her as Snow White was kind of jarring. – Funky_ButtLuvin Meryl Streep as whomever that was in Mary Poppis Returns. That whole scene was atrocious. – Maddie215