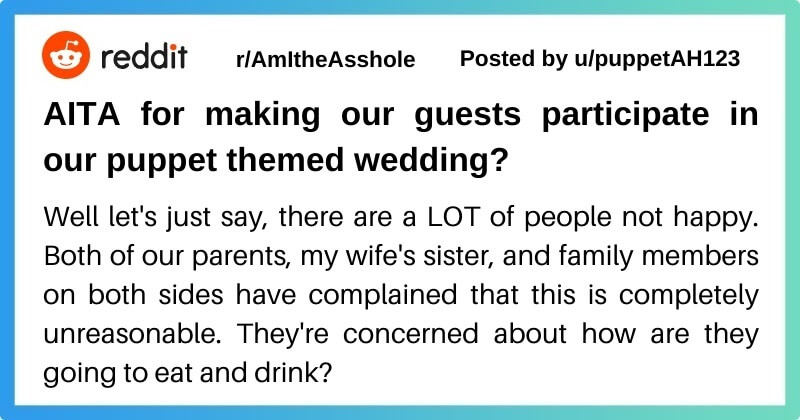 In the past, a typical wedding was a straightforward event. It required a fortune and months of preparation. But you could count on that time of your friends starting to settle down, which began in your mid-twenties, to be a confusing jumble of frothy pastels, emotional speeches, and inebriated uncles.

The entire custom is drastically different today. More and more couples appear to desire unique elements for their wedding ceremonies. Some people accomplish this by incorporating their interests and hobbies into the conversation, but most don’t go as far as u/puppetAH123 had hoped. They met in a puppetry class at college where they made their own puppets, named Hat Boy and Daisy, and started to talk to each other. They fell in love in the same way as their characters did. Their relationship grew, and after many years after graduation, they still use those characters to perform in puppet shows at the local theatre.

At their wedding, they invited the whole theatre troop of puppeteers. They also wanted Hat Boy and Daisy to be a part of the ceremony where they would celebrate their love from the beginning. It then came to their mind that they should have a wedding completely featured by puppets. It would become a special day that all their guests would remember forever.

However, not many people supported this idea. Their parents and family members on both sides thought it was totally crazy. They worry about how they would be eating, drinking, or dancing.

On the other hand, the couple told them to not worry about that because the hors d’oeuvres are all finger foods. In addition, many cocktail tables are placed around for people to put down their drinks. Food would be divided into small pieces into bite-sized portions. Participants can eat food with just a fork without using a knife.

He asked on r/AmITheAsshole whether he and his fiancée were wrong to ask all of their wedding guests to invest in a puppet to wear at their wedding. They reasoned that their puppetry hobby had played a role in their relationship.

Fellow Redditors were surprised and disagreed with the couple that they expected their loved ones to make such a costly and time-consuming commitment. They think if they were one of their guests, they would also not like to attend their party.

Do you think the idea of the couple is terrible? Let us know your opinion about this story.