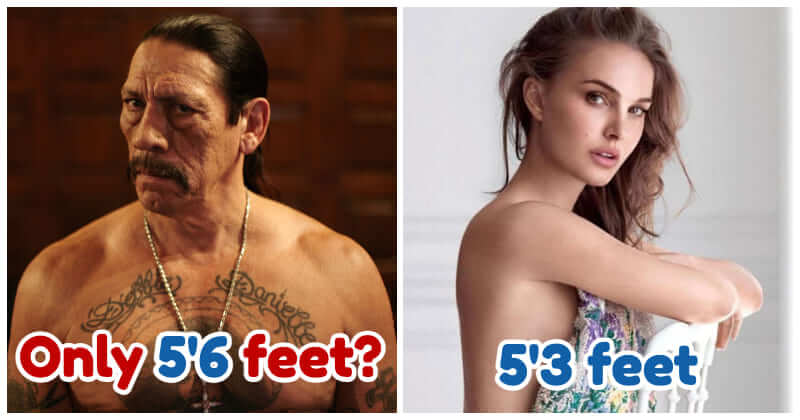 When you see someone on TV or in a movie, it can be hard to tell how tall they are. This is especially true since there are easy ways to make someone look shorter than they are. Also, everyone on screen seems bigger than life, especially stars with a lot of personality and confidence.

If you ran into some of your favorite actors or musicians on the street, you might be surprised by how tall they are in real life. In the next section, find out about 21 famous people shorter than you thought and how they feel about it. With 5’5 “, Billy Joel is four inches shorter than Christie Brinkley, one of his most well-known ex-wives. But seeing him with another supermodel, he dated made the artist feel bad about being short. “Someone took a picture of us walking down a beach at Coney Island,” Joel said of his date with 6’0 “According to The Washington Post, Elle Macpherson. “She was so tall that I looked like Bubbles the Chimp next to her, and I knew this wasn’t going to work.” Danny Trejo, who stars in “Desperado,” is scary on screen, but it’s not because he is tall. Fans of movies like “Con Air” and “Machete” may be surprised to hear that the actor is only 5 feet 6 inches tall. Shania Twain often performs in heels, so her height is easily overlooked. The singer told InStyle that she didn’t feel comfortable with her appearance as a child. “I didn’t accept who I was until after high school,” she remarked. “I realized, ‘Oh, I’m the bad girl. Maybe I should wear makeup and do my hair.'” Kendall Jenner and Khloé Kardashian are both 5’10”, but not every Kardashian is tall. Kourtney Kardashian’s height is a subject of jokes from her family, but filling out her clothing is harder. “I’m five feet tall, so I need short skirts and dresses else, I look ugly,” she told Elle. Anything in between looks odd to me. Salma Hayek gave a terrific performance in Frida. She was the appropriate height to play, Frida Kahlo, at 5’2 “, Only 1 inch shorter than the real woman. In Mexico, being short wasn’t easy for Hayek. “I’ve struggled. “I’m 5’2”, and in Mexico, it’s important to be tall,” she told the Daily Express. “People said the short thing was deformed. I hated my height.” After Black Swan, Star Wars, and Marvel, Natalie Portman has made her stamp on Hollywood. She’s only 5’3! ” Her size is often noted. She stated there were plenty of “small people jokes” when she filmed No Strings Attached with Ashton Kutcher, who is 6’2. “He’s taller than me,” said Portman. “We had a lot of fun with that, he may be more since he’s taller. My role is a gnome.” Victoria Beckham has a lot of skills. She was a Spice Girl and is now a big name in the fashion world. Getting things off the top shelf is not one of these skills. You might be surprised to learn that she’s only 5’4″, considering how much attitude Posh Spice brought to the group and how often she wears stilettos. Machine Gun Kelly is 6’4″, a full foot taller than Megan Fox, who is 5’4″. Even though their height difference is clear in pictures, she has said that her size helps her stay anonymous when she’s out in public. She told Boston.com, “People don’t realize how short I am.” “Everyone thinks I’m taller, so I often don’t get noticed because I’m so low to the ground, and everyone is looking for a taller girl.” Elliott Page is 5’1″, making his appearance in X-Men: The Last Stand extra remarkable. “Playing Kitty Pryde was fantastic since I’m five-foot-one, and I got to be a superhero,” he told Uncut in 2008. In the High School Musical movies, Zac Efron played a famous basketball player named Troy Bolton, but Efron is only 5’8″, so Bolton wouldn’t have been one of the NBA’s tallest players. Here’s another piece of proof a superhero doesn’t have to be tall: 5’3″ Black Widow star. Scarlett Johansson is comfortable with her size, but she hates when admirers call it out. “‘You’re short.'” She told Cosmopolitan UK she hears this often. “‘You’re shorter than I thought” How is it ever OK to say? Strange! Yes. “You’re short.”