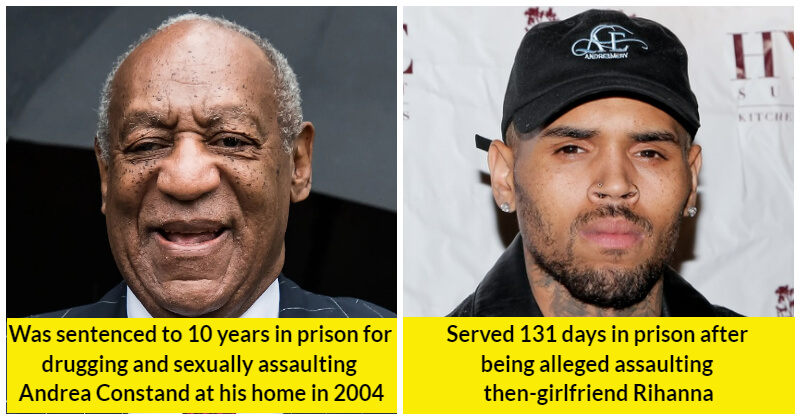 Fame comes with wealth. No one can deny that. But fame also comes with pressure and temptation. Many famous people deal with struggles with healthy methods (diet, yoga, gym,..) while some can’t resist the temptation. Alcohol and drug addiction are still found among celebrities. Some even committed serious crimes, being sentenced to jail for drug trafficking, tax fraud, sexual assault, and even murder. Such scandals shocked the world and the careers of those celebs ended.

All that glitters is not gold. The lives of the rich and famous are not always what they seem. You might be shocked when knowing that a number of well-known people have gone to prison. These people themselves tore up admirers’ trust, so they find it hard to forgive or believe in such disrespectful human beings. Below are 12 infamous names we want to show you. Take a look! Bill Cosby was once known as “America’s Dad”, but his reputation vanished into the air when he was jailed for 10 years for drugging and sexually assaulting Andrea Constand at his home in 2004. However, he was released on June 30, 2021, as his conviction was overturned. In 2017, over 80 women accused Harvey Weinstein of sexual harassment, assault, or rape. In March 2020, the former Hollywood producer was sentenced to 23 years in prison after he was found guilty of criminal sexual acts and rape in the third degree, per NPR. The college cheating scandal shattered Felicity Huffman’s reputation. In May 2021, the actress pleaded guilty to paying a college admissions consultant $15,000 to have her daughter’s SAT test scores corrected. Huffman spent 2 weeks in jail and was also sentenced to 250 hours of community service. Phil Spector died in 2021, at the age of 81, while serving a prison sentence for murder. Spector was convicted of murdering actress Lana Clarkson in 2003 and was sentenced to 19 years to life following a trial in 2009. Many fans of Robert Downey Jr. might be shocked at his past before he landed his Iron Man role in 2008. RDJ was sentenced to three years in prison for drug charges and failure to comply with the courts in 1999. In August 2000, he spent a year behind bars and still dabbled in cocaine after his release. His life totally changed in 2005 when he started a family. At age 16, Mark Wahlberg was arrested in 1988 for assaulting a man named Johnny Trinh. He was charged with assault and served 45 days of a 90-day sentence at Deer Island House of Correction. In February 2008, Wesley Snipes was convicted of three misdemeanor counts of failing to file federal tax returns and ended up serving a three-year sentence. Since his release in April 2013, Snipes has moved forward with his acting career, and appeared as Doc in The Expendables 3. You didn’t know that Tim Allen went to prison before becoming everybody’s favorite dad on Home Improvement. Allen was arrested in 1978 for trafficking cocaine. As he gave up the names of 21 people he had worked with in the drug trade, he served only five years in prison. In 2013, Chris Brown was charged with assaulting Rihanna by assaulting a man outside a hotel in Washington, D.C. The rapper was then sentenced to 131 days in prison and got released in June 2014. Stewart was charged with feds about stock sales that went down in 2000 and ended up serving five months in prison. Lauryn Hil spent three months behind the bars for tax evasion and was released in October 2013. The musician quickly kept her busy with her work and dropped a single on the eve of her exit from jail. In 2010, Lil Wayne was sentenced to one year in prison after an unlicensed gun was found on his tour bus in 2007. After his release, Lil published a memoir about his hard time in January 2012.

If Disney Princesses Came To Life, Who Would You Fall For?

Jungkook Had Difficulty During Performing At Fifa World Cup: What You Don’t Know

9 Pairs of Oscar-Nominated Actors Who Portrayed The Same Characters