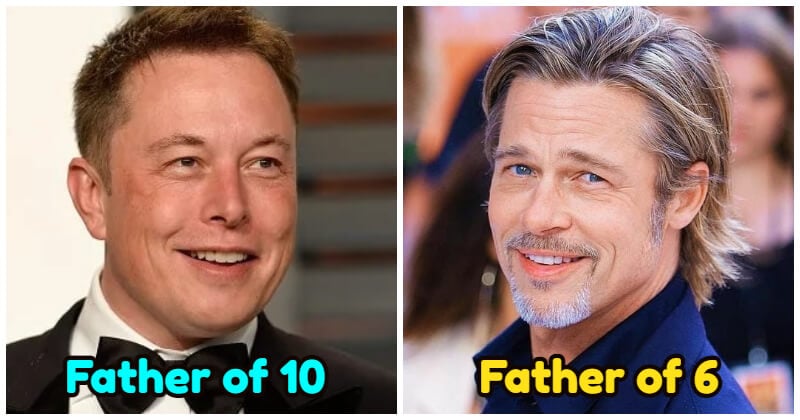 Being a parent is a blessing. Those who have opted for taking on the role of being a mother or father know that raising a kid is one of the toughest jobs you can ever do. Kids seem to be a mirror that reflects their parent’s behavior, attitude, or habits. Therefore, parents shoulder heavy responsibilities to bring up their children and educate them on how to be good people.

Raising a child isn’t easy. It is harder for celebrities, especially celebrity dads. Superstar women make up the halves of the large families, but today, we just focus on the fathers. They’ve worked long hours on set and still managed to spend time raising children. Additionally, they decided to have a whole pack of children.

Below are celebrity fathers who have more than kids than you think, and we bet their Oscar wins are less important to them than being dads. Elon Musk is known as not only the world’s wealthiest person but also the father of 10 children. He welcomed triplets and two sets of twins. Like Elon Musk, Eddie Murphy is also the dad of 10 kids. Eric Murphy is the first child with Paulette McNeely. He has 6 daughters and 4 sons with five women: Paulette McNeely, Nicole Mitchell, Tamara Hood, Melanie Brown, and Paige Butcher. Mel Gibson’s nine children are from three different relationships. He has 2 daughters and 7 sons, ranging in age from 4 to their 40s. Clint Eastwood has 8 kids with 6 different women. The great 92-year-old actor is raising 6 daughters and 2 sons. Despite having 6 kids, Mike Tyson is carefully nurturing. In fact, he has a total of 7 children but one of them passed away at the age of four. Aside from his successful acting career, Robert De Niro is a happy dad of 6 mixed-race kids, including 2 daughters and 4 sons. Brad Pitt has succeeded not only in his career but also with his family. The great actor is the father of 6 children and three of them are adopted.