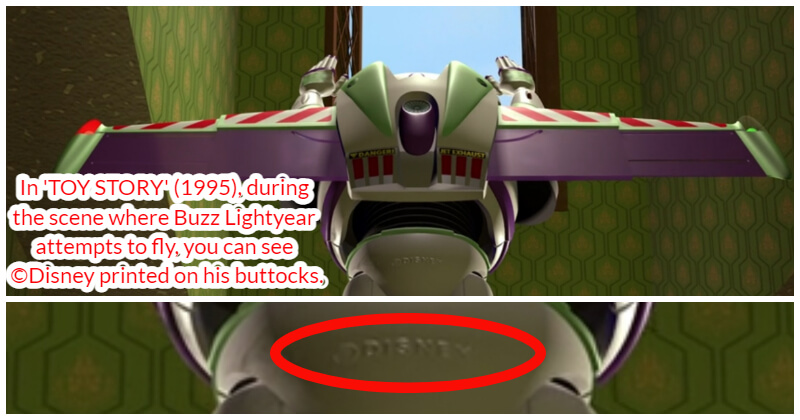 Old movies, old TV shows, old songs, and old actors always fill us with nostalgic vibes. They were once a lively, beloved part of our childhood and of course, earn a place in our hearts. Even when we’re grown up, living our busy lives, many of us spend most of the weekend (or holiday) digging into our favorite movies and TV shows or listening to our favorite songs. This can heal, guys. Or at least, it helps us reduce stress and boost up our energy levels again.

Have you ever noticed new details in a favorite movie/ TV show while watching it again? It feels like you’ve discovered a childhood treasure, haven’t you? The success of iconic movies and TV shows is they have many interesting details and Easter eggs cleverly hidden by the producers. These might need the help of eagle-eye audiences or require hours of watching to spot out. Did you find that the shopkeeper that sold nuts with fries in “In Kung Pow: Enter the Fist” (2002) also sold Pringles? Or, directors Ron Clements and John Musker appear in the parade scene in “The Princess and the Frog” (2009)?

We’ve summed up 30 exciting details in popular old movies and cartoons that people are sharing on Reddit. Scroll down and check them out!

#1 In “The Incredibles”(2004) a woman mistakes Syndrome for the superhero Fironic. In “Incredibles 2” (2018) we finally see Fironic and his costume does look somewhat similar to Syndrome’s. #3 In Kung Pow: Enter the Fist (2002), the shopkeeper that sold nuts with fries also sold Pringles.

#4 In The Dark Knight (2008), the only ones who clap for Harvey when he is being transferred to prison after coming out as the Batman are the only ones not working for either Maroney or Joker. #5 In Shazam! (2019), You can see a reference to the iconic blood stained smiley face from Watchmen on the desk of the social worker who places Billy with his foster family. #6 In The Princess Bride (1987), Inigo laments to Westley that he only works for Vizzini to pay the bills as there’s “not a lot of money in revenge.” At the end of the film, Westley suggests Inigo become the new Dread Pirate Roberts, captain of the pirate ship Revenge. #8 In Full Metal Jacket (1987) the room where the war journalists hold meetings has this sign that says “WE WILL DEFEND TO THE DEATH OUR RIGHT TO BE MISINFORMED”. #9 Clarabelle Cow can be seen in Ralph Breaks the Internet (2018) for a few seconds in the Oh My Disney scene. 2018 also marked her 90th anniversary since her first appearance.

#10 In The Princess and the Frog (2009), directors Ron Clements and John Musker appear in the parade scene. They have animated cameos in all their movies. #13 In Total Recall (1990), every event that Bob McClane lists as a reason real holidays are a “pain in the butt” happens to Doug Quaid on his trip to Mars. #14 In the movie Starship Troopers (1997) there is a scene that shows the Millennium Falcon from Star Wars (1977) attached to one of the ships. Phil Tippett was part of the visual effects team on both movies. #16 In Justice League (2017) Cyborg says “Booyah”, his catchphrase from the animated series, ‘Teen Titans’. Actor Ray Fisher did NOT want to say the line, hence his annoyed expression. #17 In Cars (2006), in Luigi’s Casa Della Tires, Fettuccini tires are regular tires, whereas whitewall tires are known as Fettuccini Alfredo, for the color of the sauce #19 In “The Longest Yard” (2005) one of the convicts calls Adam Sandler’s character “Fake Slim Shady”. The person playing that convict (and the 3 other prisoners around him) were in the Hip-Hop Group “D12” alongside with Eminem

#20 In The Bee Movie (2007) , after the bees win the court case and honey becomes a “controlled substance” the ATF becomes ATFH ( which stands for alcohol, tobacco, firearms, and honey ) #22 In the credits of Animal House (1978) it says Douglas C. Neidermeyer was killed in Vietnam by his own troops. In Twilight Zone: The Movie (1983) during the “Time Out” segment, a soldier says, “I told you guys we shouldn’t have shot Lieutenant Neidermeyer.” Both movies were directed by John Landis. #23 In American Psycho (2000) the font used for Paul Allen’s card is called ‘Copperplate Gothic’ which was the same font used in the opening title sequence and end credits of the movie. #24 In Neon Genesis Evangelion: End of Evangelion(1997), near the beginning of the film Misato is seen reading a file on a computer screen that reveals the truth of the Second Impact. In reality, it is nothing but a short bio on Gainax and its films. #26 In the movie The Dark Tower (2017) when Jake visits his psychiatrist Dr. Hotchkiss, a picture of the Overlook Hotel from the movie The Shining (1980) is shown. Both stories are written by Stephen King. #28 In Spider-man Homecoming (2018), MJ is seen reading Invitation To A Beheading by Vladimir Nabokov. The book is about a man in a prison cell, the only other occupant is a spider. #29 In Inside Out(2015), Depending on the country of release, Riley’s father daydreams about either hockey or football (soccer). #30 In ‘TOY STORY’ (1995), during the scene where Buzz Lightyear attempts to fly, you can see ©Disney printed on his buttocks.